Kyiv, January 20, 2016. Ukrainian troops incurred no casualties over the last day, one serviceman was wounded in action. It was quiet in the Luhansk sector, while a series of provocations by militant groups was registered in the Donetsk and Mariupol sectors. “In the Donetsk sector the adversary concentrated its activities in the area of the Donetsk airport. Thus the adversary used 82-mm mortars in the area of Putylivska mine (Butovka-Donetska). Militants also instigated a series of armed provocations along the entire frontline between Avdiivka and Pisky,” said Colonel Andriy Lysenko, spokesman of Presidential Administration on ATO-related issues at a press briefing at Ukraine Crisis Media Center. Militants also violated ceasefire in Zaitseve and Novhorodske. No provocations were registered at the Svitlodarsk salient. 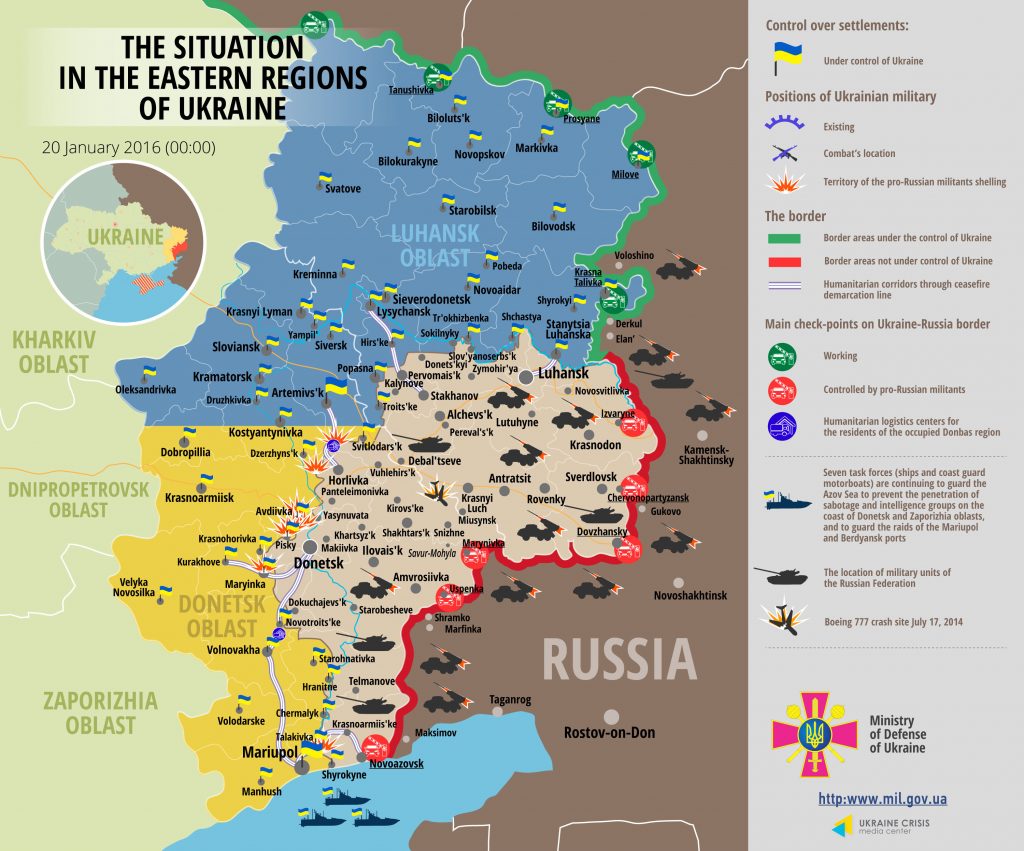 Next consignment of humanitarian aid from the International Committee of the Red Cross was delivered to the residents of the temporary uncontrolled areas of Luhansk and Donetsk regions. “Eleven trucks crossed to the occupied territory through Novotroyitske control checkpoint,” noted the ATO spokesman.

In course of a special operation Ukrainian law enforcement staff detained a former militant from “Prizrak” (Ghost) militant group. The man was standing guard at the check points and was conducting checks on vehicles from July 2014. “During the advance of Ukrainian troops the militant fled to Russia where he was hiding till September last year,” noted Colonel Lysenko. Additionally a militant was detained in Donetsk region, he was fighting in the militant group headed by the leader nicknamed “Turkman” in 2014.

Law enforcement agencies detained a weapons salesman in Kostyantynivka. The information that was obtained helped solve two crimes. “It was discovered that the Kalashnikov rifle, five magazines to it and over 100 ammunition rounds were owned by a friend of the detained militant,” he added. In Avdiivka 600 ammunition rounds and an F-1 combat grenade were seized from a local female resident. Information on the arsenal was reported to law enforcement authorities by the locals.