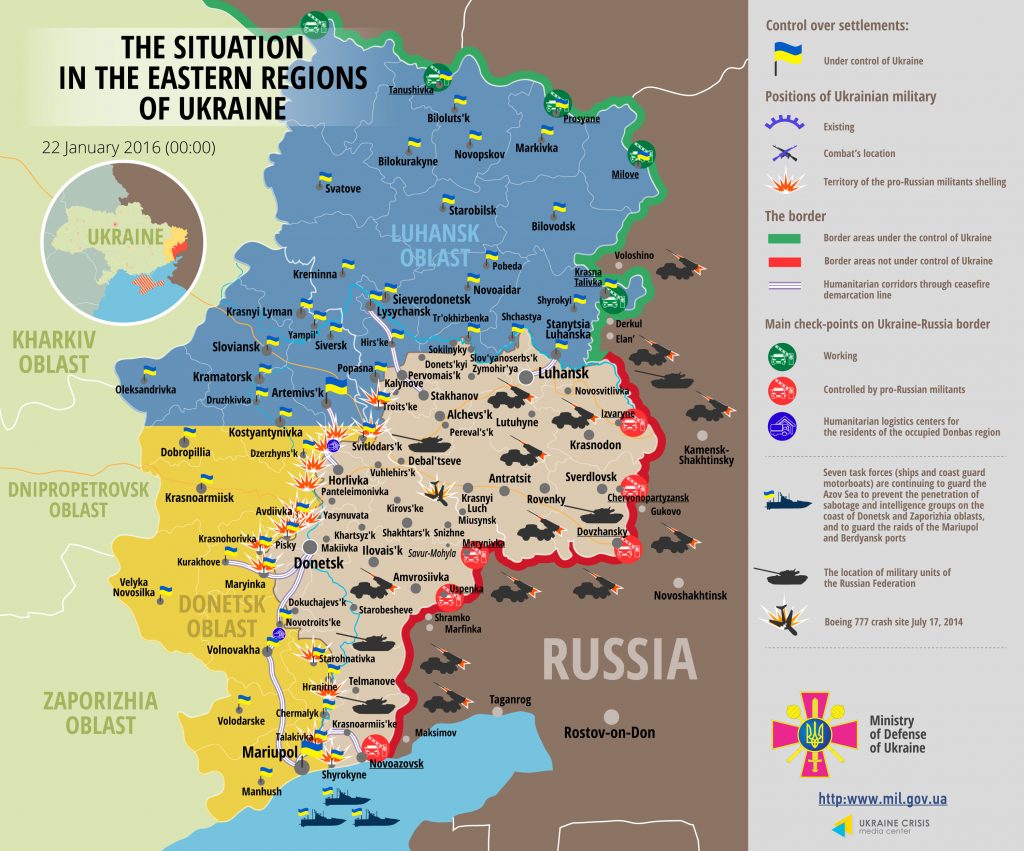 In the Donetsk sector militants were violating ceasefire along the entire contact line. “Adversary used an infantry fighting vehicle twice south-east of Novhorodske. Largest number of hostile attacks was registered in the area of the Donetsk airport yesterday, in Pisky in particular,” said the ATO spokesman. At the same time it was quiet in the Luhansk sector.

Ukraine’s Security Service together with the State Border Guard Service and the State Fiscal Service prevented an attempt to smuggle the equipment for cable networks to the temporary occupied territory. Law enforcement staff also discovered two weapons caches – in Teple village, Luhansk region and near Bohdanivka village, Donetsk region. Three RPG-22 grenade launchers, 11 ammunition pieces for the RPG-7 grenade launcher and two boxes of VOG-17 grenades were discovered in the first cache. RPG-18 grenade launcher, 20 grenades, nine fuzes and over 700 rounds of ammunition for the Kalashnikov rifle were found in the second cache. Security Service staff also discovered that a resident of Kyiv was in possession of a large stock of weapons. “Staff of Ukraine’s Security Service together with police and the Prosecutor’s Office seized 44 pistols, UZI submachine gun, spare parts to rifled bore weapons and a large number of cold weapons,” said the ATO spokesman. “At Zaitseve checkpoint, Donetsk region, border guards seized UAH 240 thousand from a car driver who was trying to smuggle it across the contact line,” added Colonel Lysenko.

Colonel Lysenko also said that two more former militants used the return program of the Security Service of Ukraine “They are waiting for you at home”, Kramatorsk city court ruled to free them of criminal liability.

The Presidential Administration spokesperson on ATO-related issues informs about Ukrainian servicemen who were killed and wounded in action on a daily basis.

President of Ukraine Petro Poroshenko commented on military action in eastern Ukraine during his visit to Switzerland in an interview to Bloomberg: “Yesterday [January 20], my country lost three soldiers, today [January 21] two soldiers were killed, which is unacceptable.”

The President noted of casualties in Ukrainian Armed Forces that occurred not in the course of military action over January 20-21. Ukraine paid a high price for the Russian aggression. The country values every single soldier. President emphasized that Russia must fulfill its part of Minsk accords in order to restore peace in Donbas and save human lives.