Kyiv, January 27, 2016. Situation in eastern Ukraine escalated yesterday. Militants increased intensity of attacks upon Ukrainian positions in the Donetsk and Mariupol sectors. “Militant groups were firing from mortars in a non-systematic way and launched a tank attack. ATO forces were returning fire responding to life-threatening enemy provocations,” said spokesman of Presidential Administration on ATO-related issues Colonel Andriy Lysenko at a press briefing at Ukraine Crisis Media Center. In the Luhansk sector complete ceasefire was standing over the last day. In the Donetsk sector militants were violating ceasefire along the entire contact line. “Positions of Ukrainian troops near Zaitseve, north of occupied Horlivka were fired upon by enemy from 82-mm mortars twice over the last day – at the time of sunrise and after the sunset,” said Colonel Lysenko. Militants also made a powerful mortar attack upon the ATO forces near Troyitske, south-west of Horlivka “Enemy fired twenty 82-mm mines upon Ukrainian positions over 30 minutes,” he added. 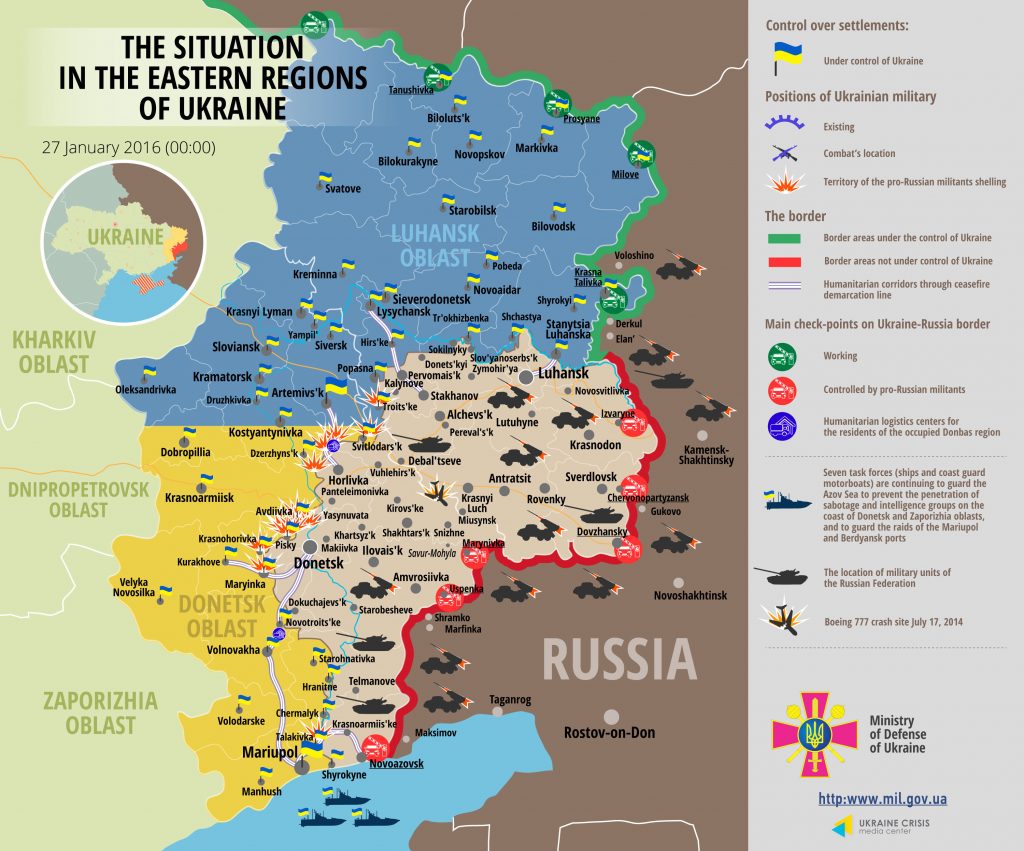 Highest number of militant attacks upon ATO forces continuously stands near the Donetsk airport. Snipers intensified the fire; they conducted seven attacks in the area of the Donetsk airport. In the same area close to Pisky Ukrainian positions were fired upon from tank-mounted weapons. In the Mariupol sector Maryinka and Krasnohorivka were hotspots over the last day. There was a mortar attack in Krasnohorivka. “Militant groups were firing upon ATO forces almost incessantly after the sunset using anti-aircraft mounts, grenade launchers and large-caliber machine guns. One Ukrainian serviceman was wounded in action resulting from the attack. Ukrainian troops suffered no other losses over the last day,” said Colonel Lysenko.

The ATO spokesman said law enforcement staff discovered a weapons cache in Mykolayivka near Sloviansk. “Information was received from a militant with a criminal record. Kalashnikov rifle, a Makarov pistol and over 200 of ammunition rounds of various calibers were seized,” elaborated the spokesman. Ukraine’s Security Service is detaining the agents recruited by the Russian Security Service (FSB). Ukraine’s counter-intelligence service discovered that the chief inspector at one of the National Police units in Luhansk region was working for the Security Service of the Russian Federation (FSB). “In 2014 he visited the temporary occupied territory where he was recruited by the FSB representatives. They started actively using the services of the chief inspector from autumn 2015. He was collecting and passing information on police staff, service vehicles, location of checkpoints and internal documents. When his house was searched, Ukraine’s Security Service found a proof that the major was working for the FSB,” said Colonel Lysenko.

Ukraine’s Security Service also prevented set up of agent network in Dnipropetrovsk, staff of the service detained a resident who was collaborating with the FSB. He was recruited last summer when he was in the annexed Crimea and violated the law, this fact was used by the Russian Security Service, said the ATO spokesman. “The agent’s task was to search for pro-Russian law enforcement staff and recruit them for further subversive activities in Ukraine. He was soon detained by Ukrainian law enforcement staff,” said Colonel Lysenko.