Kyiv, February 3, 2016. Over the last day, the situation in the ATO zone remained tense, especially in Donetsk sector. “The most difficult situation is in Zaitseve. Yesterday, the enemy carried out a series of attacks using 120-mm mortars there,” said Col. Andriy Lysenko, Presidential Administration spokesperson on ATO related issues, at a press briefing at Ukraine Crisis Media Center. In addition, insurgents used mortars of different calibers in Mayorsk, Avdiivka, Opytne and Pisky. “Over 250 projectiles were fired on our positions yesterday,” – said Col. Lysenko. The situation near Donetsk airport became tenser. “The enemy actively fires from small arms, grenade launchers and mortars. This occurs both in the dark and in daylight hours,”- he noted. Several provocations were recorded in Svitlodarsk arc, without the use of heavy weapons. Col. Lysenko said that all the evidence of violations of Minsk agreements by the insurgents is handed to representatives of the OSCE mission. 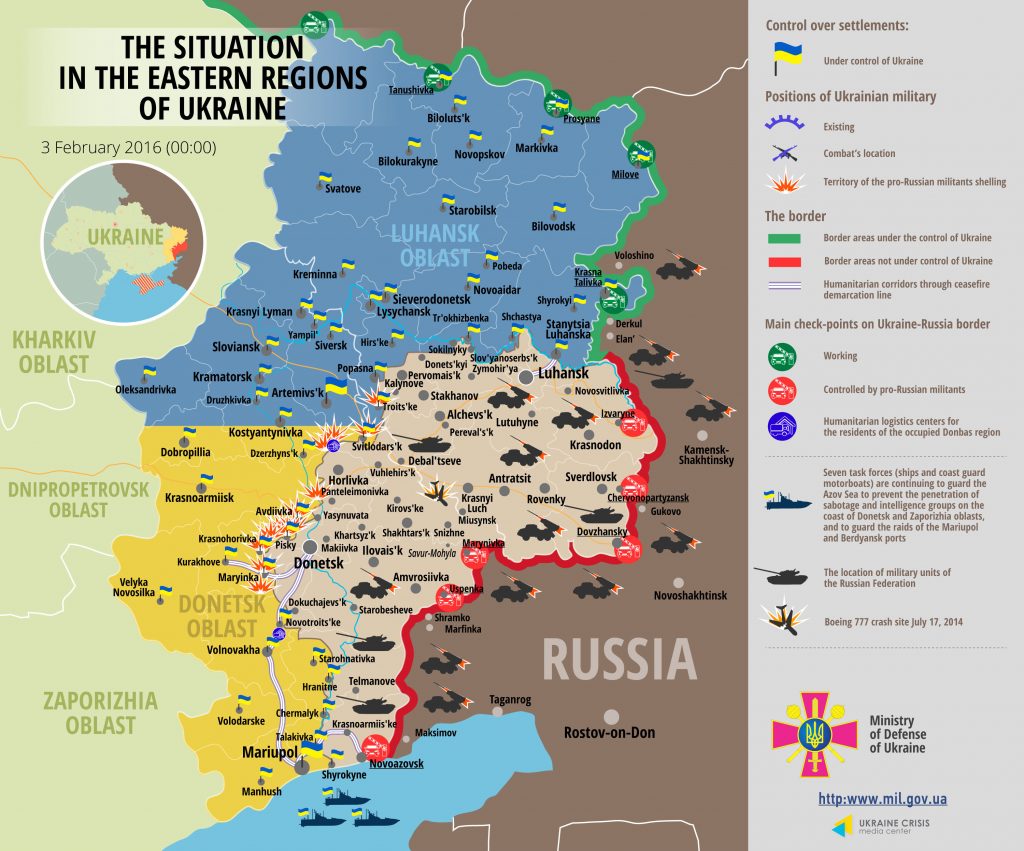 In Mariupol sector, militants violated the ceasefire in Krasnohorivka. “In particular, the enemy used mortars three times,” he said. There were a few more enemy provocations in other sectors. In Luhansk sector, no violations were recorded. “Ukrainian Armed Forces did not incur any lethal casualties, two were wounded over the last 24 hours,” said Col. Lysenko.

The Security Service of Ukraine exposed two agents of Russian special services. “The malefactors gathered information about unit commanders of Ukrainian Armed Forces and National Police, also about soldiers who serve in the ATO zone. Operatives detained one of them – the messenger- on the Maryinka checkpoint when he tried to pass information to temporarily occupied territories,” said Col. Lysenko. In addition, as a result of a special operation in Zolote, law enforcement officers detained a former insurgent from “Prizrak” battalion who fought in militants’ ranks in May 2014 till the militants retreated from Lysychansk.

In addition, police discovered a number of weapon caches: two – in Hranitne and Berezove with 17 TNT blocks and two F-1grenades, another – in the warehouse in Krasnoarmiysk with five hand-held anti-tank grenade launchers, one machine gun, 120 grenades and more than 6,000 ammunition of different caliber. “In Avdiyivka law enforcement officers examined personal belongings of a town resident and found eight grenades, three pistols and a Kalashnikov rifle,” said Col. Lysenko. Having interrogated the detainee, investigators were able to find the main arsenal in the basement of an abandoned building – 10 grenade launchers, 10 grenades, and over 19,000 ammunition of different caliber. “According to the detainee, he collected weapons for sale,” said Col. Lysenko. In Dzerzhynsk, police intercepted two packages with weapons that had to be delivered to Kyiv and Rivne region. “There was Kalashnikov ammunition, items of military ammunition and used anti-tank grenade launchers tubes,” he noted.