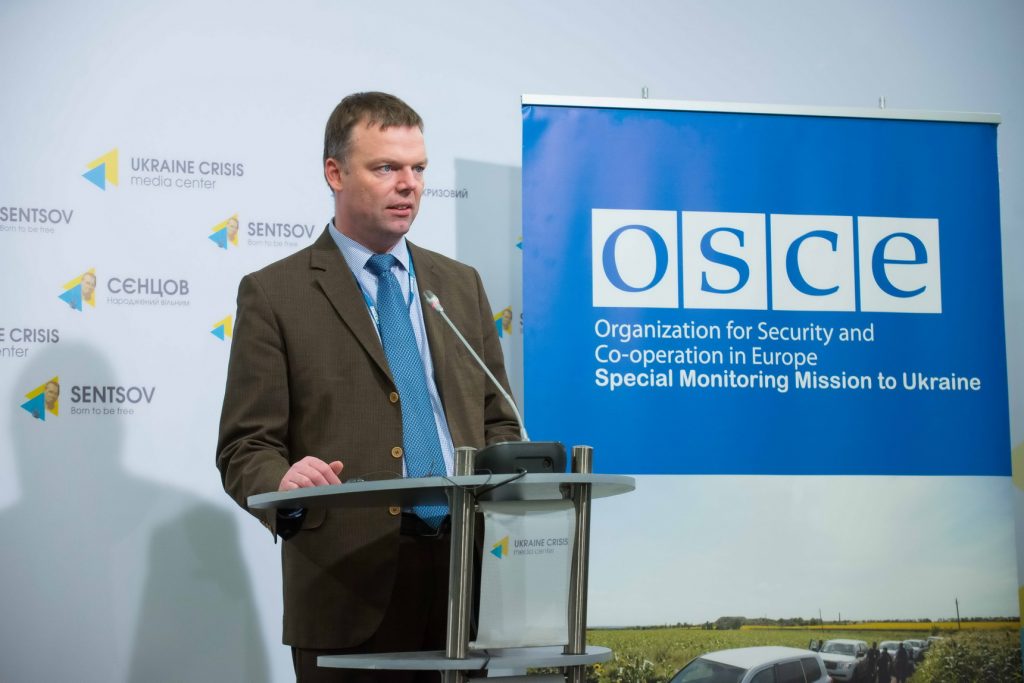 Kyiv, February 4, 2016. The OSCE SMM has seen a massive increase in the level of violence in the past few days, especially in areas around the destroyed Donetsk airport. On Monday evening, in less than an hour, they recorded 247 explosions there. The following morning, within 50 minutes, another 377 explosions were registered. This was stated by Alexander Hug, Principal Deputy Chief Monitor of the OSCE Special Monitoring Mission in Ukraine at a briefing at Ukraine Crisis Media Center. “The intensity of violence reminds me of the worst days of the conflict. It makes a mockery of the ceasefire”, he said.

According to Mr Hug, the SMM also registered significant levels of violence in the wider Horlivka area, in particular in and around Zaitseve, just north of the city. There, monitors recorded 46 explosions and 160 rounds of heavy-machine-gun fire on Sunday, 237 explosions and 100 bursts of heavy-machine-gun fire on Monday evening and another 102 explosions yesterday evening. Mr Hug added that areas to the north-east of Mariupol remain tense. “The SMM’s camera in Shyrokyne on Tuesday evening captured multiple explosions, as well as traces of incoming and outgoing fire, in and around Kominternove”, he explained.

Alexander Hug emphasized that area around Popasna, Zolote and Pervomaisk in Luhansk region is increasingly becoming an area of concern. “We are so often denied access by the so-called “Luhansk People’s Republic” (“LPR”) in the area, it is impossible to be sure of what is going on there. We do, however, regularly receive reports from there of ongoing violence, most of it happening at night”, Principal Deputy Chief Monitor added. According to him, monitors gained entry to a military-type compound near Pervomaisk where they saw 122mm artillery ordnances. SMM aerial surveillance also revealed the presence of one tank near Novhorodske and two tanks in Donetsk city on Sunday.

Mr Hug reiterated the devastating effect such activities have on the civilian population. The SMM continues to note, inter alia, an entrenched position at a school in Zaitseve of the so-called “Donetsk People’s Republic” (“DPR”), two armored personnel carriers right beside the school, armed so-called “DPR” members at a hospital in Debaltseve. “We also noted camouflaged military hardware hidden amongst civilian houses in Kominternove and Pavlopil. Increased violence has seen the closure of the crossing point near Zaitseve and there is a threat of closure of the one near Stanytsia Luhanska”, the Principal Deputy Chief Monitor said.

Meanwhile, around operational checkpoints the use of mines is still commonplace. The SMM saw them at a so-called “DPR” checkpoint near Yasynuvata and at a Ukrainian Armed Forces checkpoint near Marinka. All along the contact line, people are without basic utilities. Critical infrastructure largely remains unrepaired. The violence is constantly getting in the way of repair work.

According to Mr Hug, the SMM is concerned this week by reports of disappearances in Donetsk. Mr Ihor Kozlovsky, a renowned religious scholar, and Ms Marina Cherenkova, the Coordinator of the local NGO “Responsible Citizens of Donbas” remain in captivity. “These people are trying to improve things in Donbas. The people of Donbas need more people like them. The so-called “DPR” should immediately free such people, and allow them to continue their work. There are too many problems and too few people trying to solve those problems”, he argued.