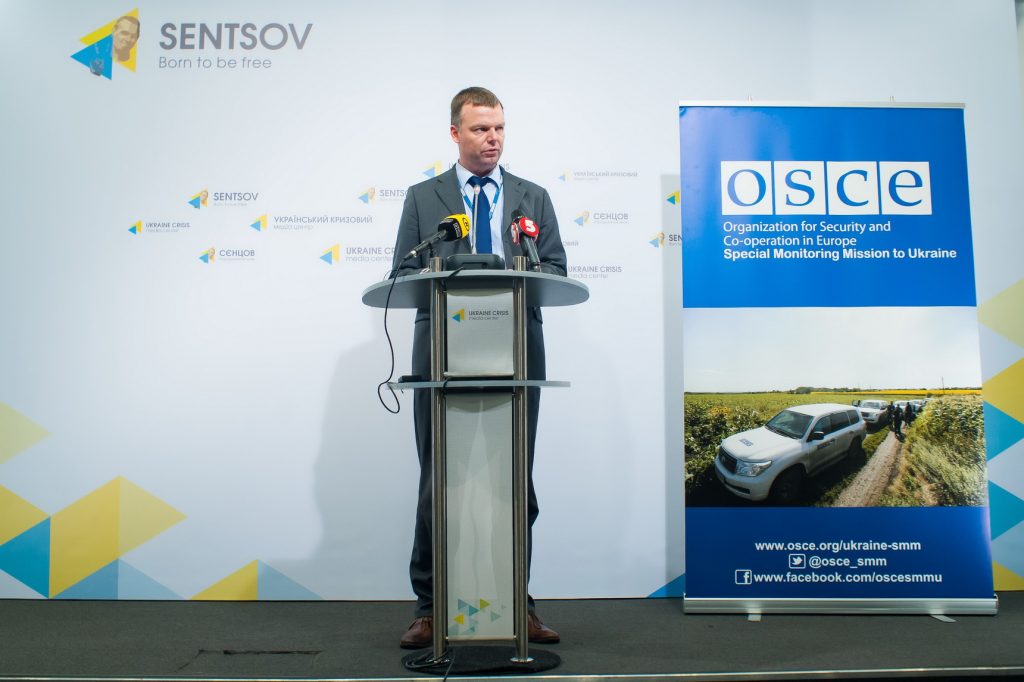 Kyiv, February 11, 2016. Yesterday, when the OSCE Special Monitoring Mission (SMM) was in Marinka (Donetsk oblast), several civilians lost their lives there when a mini-van hit an anti-tank mine. Throughout the whole week, the monitors have seen hundreds of people queuing at that very same checkpoint, and at the other crossing points along the contact line. At Stanytsia Luhanska bridge, the SMM has been recording up to 2,000 people crossing daily. “It seems the driver of the mini-van that hit a mine in Marinka yesterday was trying to circumvent the checkpoints,” argued Alexander Hug, Principle Deputy Chief Monitor of the OSCE Special Monitoring Mission in Ukraine.

According to Mr Hug, the security working group within the Trilateral Contact Group has identified 12 priority areas for de-mining. Nevertheless, this is only the bare minimum surface area is to be de-mined. “There are hundreds if not thousands of other areas similarly infested with mines and unexploded ordnances (UXOs). This Tuesday, for instance, we saw an Uragan UXO two kilometres north of Debaltseve,” added the Principle Deputy Chief Monitor.

Alexander Hug stated that comparing the period before the signing of the Minsk Package last year with the period after, one thing stands out: the massive decrease in the use of heavy artillery. However, in the north-eastern outskirts of Horlivka last week the SMM recorded approximately 100 artillery explosions on just one day. Yesterday, they recorded the use of Grad multiple launch rocket systems in Starohnativka. Just last night the monitors received imagery obtained from one of their unmanned aerial vehicles. “It indicated the presence of a multiple launch rocket system (MLRS) hidden under trees in the so-called “Luhansk People Republic” (“LPR”)-controlled Veselohorivka in Luhansk region.

Also, the SMM continues to face restrictions in freedom of movement – in some places systematic in nature. This week armed the so-called “Donetsk People Republic” (“DPR”) members have effectively locked the monitors out of areas east of a line running from Prymorske to Kominternove. And yesterday someone fired shots at one of the SMM UAVs in an area not controlled by the Government approximately 3km north of Veselohorivka. “This is the same Veselohorivka where one of our UAVs had earlier spotted the MLRS. In trying to prevent us from seeing, they do, however help us – all of us – to see something else: the true extent of their commitment to what has been agreed at Minsk”, stated Mr Hug.

Alexander Hug expressed concerns on inability of Joint Center for Coordination and Control (JCCC) to deal effectively with impediments to monitoring and verification. “Part of the problem arises from the lack of its clear mandate, role and responsibilities. Also it needs to get better in making joint decisions”