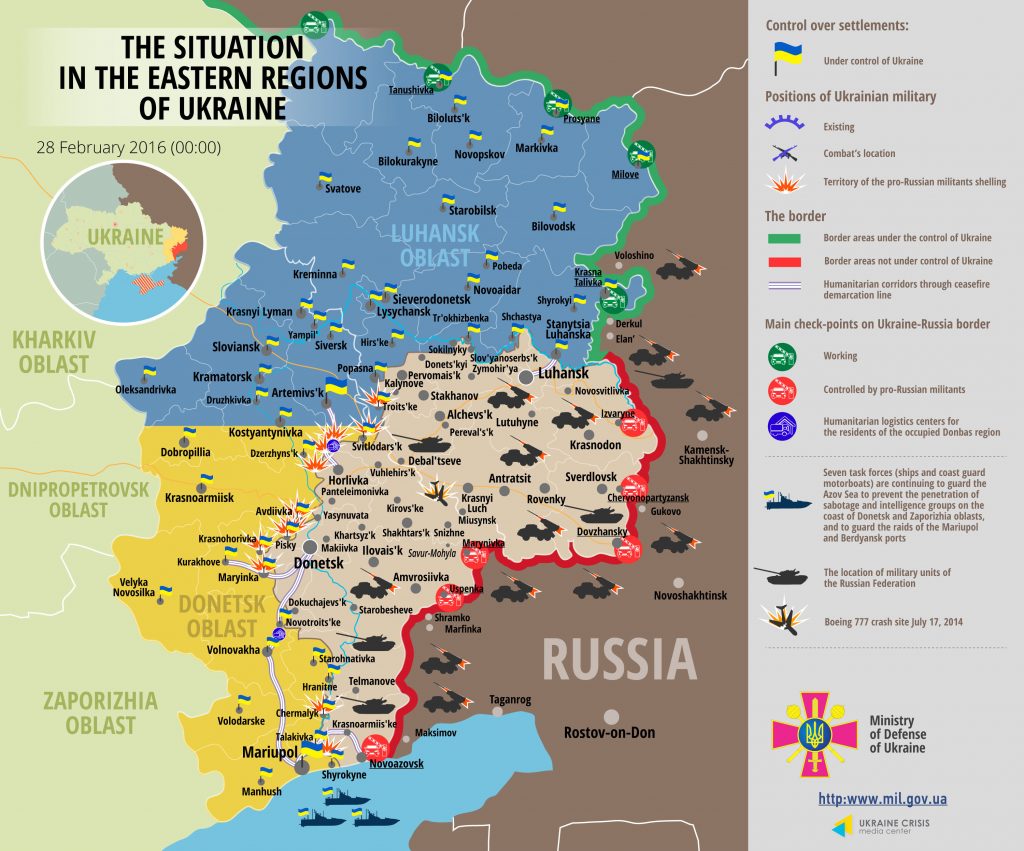 Ukrainian Armed Forces incurred no losses in combat in the last 24 hours, one serviceman was wounded.

In the Luhansk sector militants were shooting randomly at Zolote checkpoint from 82-mm mortar launchers in an attempt to provoke Ukrainian troops respond with fire. In the Donetsl sectors Russia-backed militants were actively using 82-mm and 120-mm mortar launchers near Krasnohorivka. “They were shooting from Staromykhailivka village controlled by pro-Russian militant groups. Moreover, the situation was difficult in the vicinity of Donetsk airport. Militants were shooting from small arms, large machine guns and grenade launchers near Pisky settlement, Avdiivka and Opytne. Moreover, two snipers’ attacks were registered near Pisky, and two 82-mm mortar shells were launched at positions near Opytne,” said Col. Lysenko.

Militants are instigating provocations on the outskirts of Horlivka. They shot from small arms and large machine guns near Troitske, Maiorsk and Zaitseve. Moreover, militants used grenade launchers three times and shot from a large machine gun in the vicinity of Luhanske settlement.

In the Mariupol sector Russia-backed militants shot from mortars at ATO troops’ positions near Chermalyk. “Moreover, the situation was difficult near Maryinka, where provocations involving use of grenade launchers and two snipers’ attacks were registered. Another provocation took place near Vodiane,” added the spokesman.

Ukraine’s Security Service (SBU) jointly with police detained a militant of the self-proclaimed “Donetsk People’s Republic” in Sloviansk, Donetsk region. The criminal was recruited by a militant with nom de guerre ‘Mongol’ in May 2014 and joined one of the militant groups. He was standing armed guard at checkpoints in the city, but when Ukrainian troops advanced, he abandoned his accomplices and returned home.

The SBU and police officers found a weapons cache in Severodonetsk, seizing four shells for RPG-7 grenade launcher, four RGD-5 grenades and large number of cartridges.“Moreover, law enforcements recently stopped an attempt to send weapons by post. One of the criminals tried to send three F-1 grenades with fuses and a smoke grenade to Odesa. A Dnipropetrovsk region resident tried to send four guns to Kurakhove by courier delivery. Both attempts were prevented in time,” said Col. Lysenko.