Kyiv, March 1, 2016. The situation in the ATO zone remained restless in some areas of the frontline in the Donetsk and Mariupol sectors yesterday. “The situation was the most difficult in the vicinity of Donetsk airport, namely in Pisky and Krasnohorivka, where insurgents used mortar launchers seven times, launching several dozen mortar shells. In total, there were 35 cases of hostile shelling in the Donetsk sector,” said Colonel Oleksandr Motuzyanyk, Presidential Administration spokesperson on ATO related issues, at a press briefing at Ukraine Crisis Media Center. The situation was also tense at the Svitlodarsk bulge, Novhorodske and Novoselivka Druha. At the same time, the ceasefire held in the Zaitseve-Mayorsk area first time in many months. 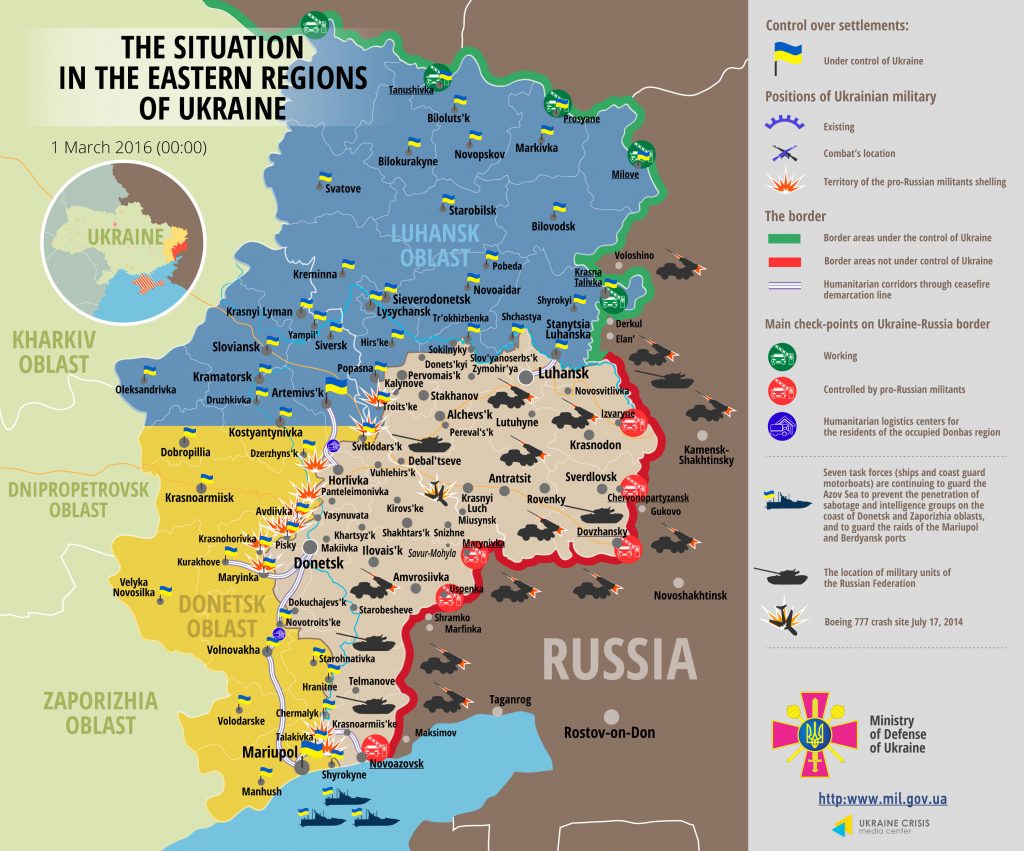 In the Mariupol sector militants actively violate armistice in Maryinka and Hnutove area. “Insurgents used 82-mm mortar launchers once and opened sniping fire twice. In total, 19 militants’ attacks were registered in these lines of defense.  ATO troops responded with fire many times to stop provocations,” said Col. Motuzyanyk. Ukrainian Armed Forces incurred no losses in combat in the past 24 hours, but three troops were wounded.

“According to the Main Intelligence Directorate of the Ministry of Defense of Ukraine, a military convoy of combat equipment entered proceeded from Russia through Novoazovsk to the occupied territory on February 29. The convoy consisted of six combat armored vehicles, four trucks with ammunition and two fuel refilling tankers,” informed Col. Motuzyanyk. Moreover, intelligence informs of incidents with a commander of so-called “7th separate motorized rifle brigade of the Luhansk People’s Republic” and a militant from so-called “9th special marine motorized rifle regiment of the Donetsk People’s Republic”. They happened on February 28 and 29 correspondingly and were caused by immoderate drinking.

Law enforcement officers found an AK-47 assault rifle, 4500 cartridges for it, three grenades and 112 grenade fuses in Svatove, Luhansk region. Moreover, illegal weapons were found during examination of a vehicle at a checkpoint near Krasnoarmiysk. “Three grenades with fuses, under barrel grenade launcher, ten shells for under barrel grenade launcher and 90 cartridges for Kalashnikov assault rifle were seized,” said the spokesman.

Col. Motuzyanyk also said that military radio started broadcasting today. “Army FM is the first radio for the army and about the army defending territorial integrity of Ukraine at the frontline,” he said. It is possible to listen to the radio station on the Internet. In 10 days it will start broadcasting in the ATO zone in FM radio band.