Kyiv, March 5, 2016. In Luhansk region Ukraine’s Security Service detained organizers of the pseudo referendum of May 2014. They are the head and a member of a village council of Novoaydarsky district in Luhansk region. Investigators discovered that the head of the village council gave council members ballot boxes at home. They received lists of voters and ballot stamps from a member of a separatist organization on the street. Members of the so-called “commission” counted votes and filed protocols in the woods, said spokesman of Presidential Administration on ATO-related issues Colonel AndriyLysenko at a press briefing at Ukraine Crisis Media Center. 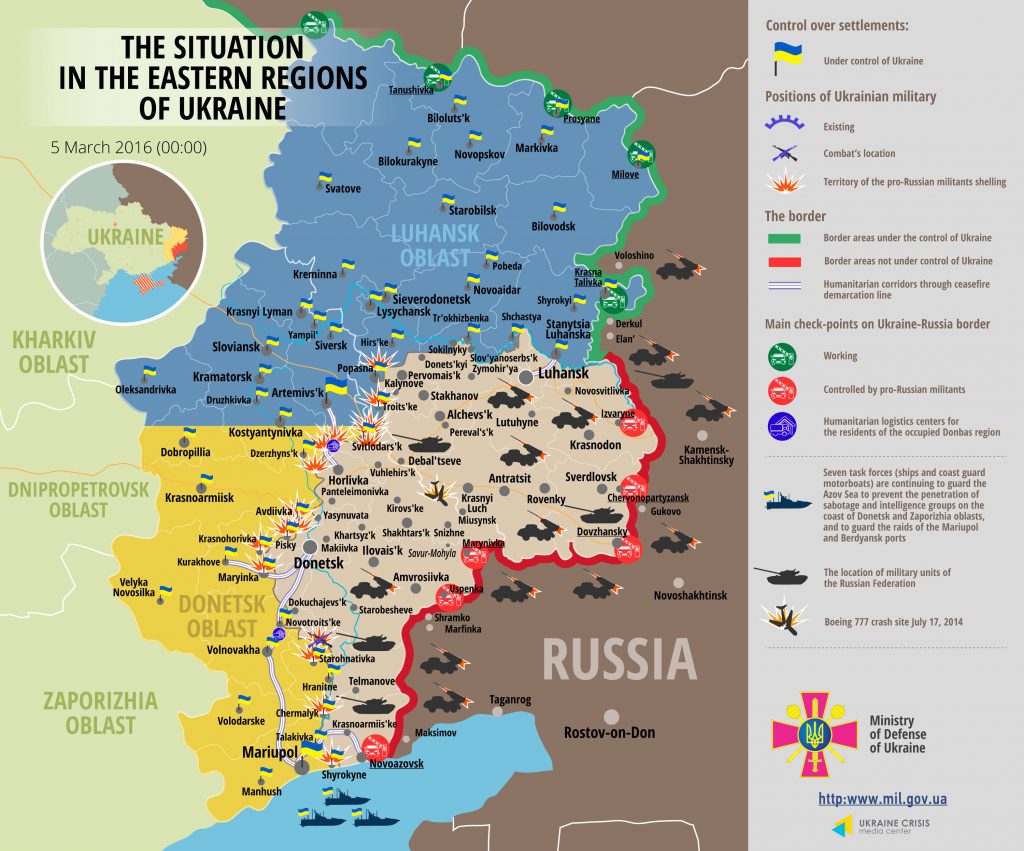 ATO forces registered 51 episodes of ceasefire violation by militant groups over the last day. In the Luhansk sector Russia-backed militants opened fire twice in Popasnyansky district. Forty two attacks upon the positions of ATO forces were made in the Donetsk sector. Militant groups used mortars 13 times on outskirts of Horlivka and Donetsk. “In the Mariupol sector enemy made a series of mortar attacks in Starohnativka, Chermalyk and Shyrokyne. Instead it was relatively calm in Maryinka yesterday – only one militant provocation was registered,” explained Colonel Lysenko.

Two Ukrainian servicemen were killed in action over the last day, five were wounded in action.

According to Colonel Lysenko in Stanytsia LuhanskaUkraine’s Security Service detained a militant informer of the so-called “Luhansk People’s Republic” (“LPR”). The local resident was systematically collecting information on places of deployment of Ukrainian military equipment and troops in ATO zone as well as on the routes of their movement.

ATO spokesman also reported that another former member of a militant group had recently used Security Service’s program “They are waiting for you at home” to return to the government-controlled territory. “In 2014 a resident of Luhansk region enlisted in the “LPR” militant group. He was digging trenches, equipping firing positions and unloading ammunition. Having come under fire he realized that he had made a wrong decision, over the time he concluded that militant leaders are first of all taking care of their own interests. He learnt about the program offered by the Security Service and used it to return,” said Colonel Lysenko.