Kyiv, March 7, 2016. ATO troops did not register a single militants’ provocation in the Luhansk sector in the past 24 hours. Ukrainian Armed Forces incurred no casualties, said Colonel Andriy Lysenko, spokesman of Presidential Administration on ATO-related issues at a press briefing at Ukraine Crisis Media Center. 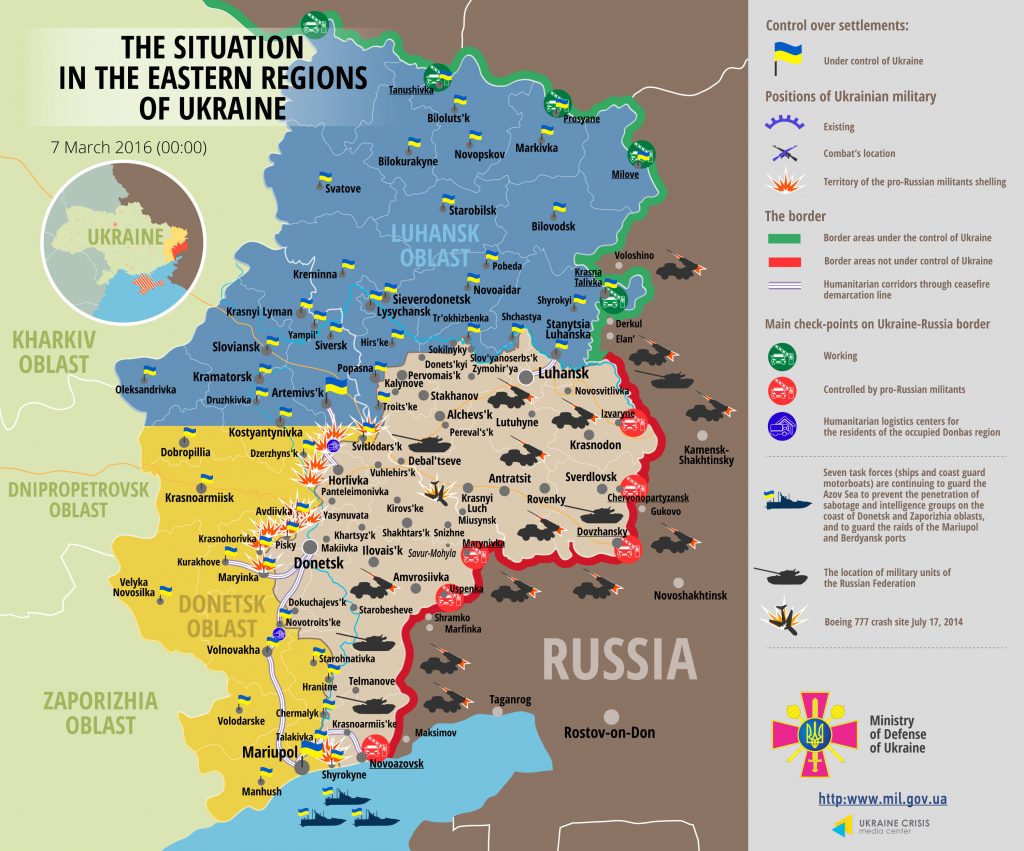 According to Col. Lysenko, in the Donetsk sector militants fired mainly in the vicinity of Donetsk airport, mainly at our positions near Avdiivka. “Over 200 shells from 82-mm and 120-mm mortar launchers were launched in the last 24 hours at positions near Avdiivka. Nevertheless, according to law enforcements, shelling continued yesterday and resulted in destruction of two residential buildings where civilians lived. Moreover, attacks with mortar fire were registered in the vicinity of Pisky, Opytne and Luhanske. Militants’ sniper was active near Opytne. Militants were shooting from small arms only in the Mariupol sector. Five provocations were instigated near Maryinka and one near Shyrokyne. Another provocation took place near Vodiane,” informed the spokesman.

Police investigators detained a militant of the self-proclaimed “Donetsk People’s Republic” in Yasynuvata district, Donetsk region. “The criminal was keeping watch in Avdiivka and Spartak villages in June-December 2014, fighting against ATO troops. He also served at a military base of ‘Vostok’ militant group. Security Service of Ukraine detained the militant when he came to the Ukraine-controlled territory to visit his parents,” informed the spokesman.

According to Col. Lysenko, border guards seized a magazine for Kalashnikov rifle with cartridges during examination of a vehicle proceeding to the occupied Crimea through Chongar checkpoint.