Kyiv, March 8, 2016. It was calm in the Luhansk sector of the ATO zone yesterday. In the Donetsk sector Avdiivka and Piskyremain epicenters of combat actions. Militants repeatedly used heavy weapons in these spots including 82-mm and 120-mm mortars as well as tanks. Following one of the attacks a hostile subversive group that was moving from the direction of Yasynuvata attacked the Ukrainian positions. Ukrainian troops repelled the attack. Another powerful attack on Ukrainian positions that lasted almost four hours took place near Luhanske. “Adversary used an infantry fighting vehicle. ATO forces returned fire and stopped occupants’ aggressive actions. Similar attack took place upon the nearby positions near Lozove,” said spokesman of Presidential Administration on ATO-related issues Colonel Oleksandr Motuzyanyk at a press briefing at Ukraine Crisis Media Center. 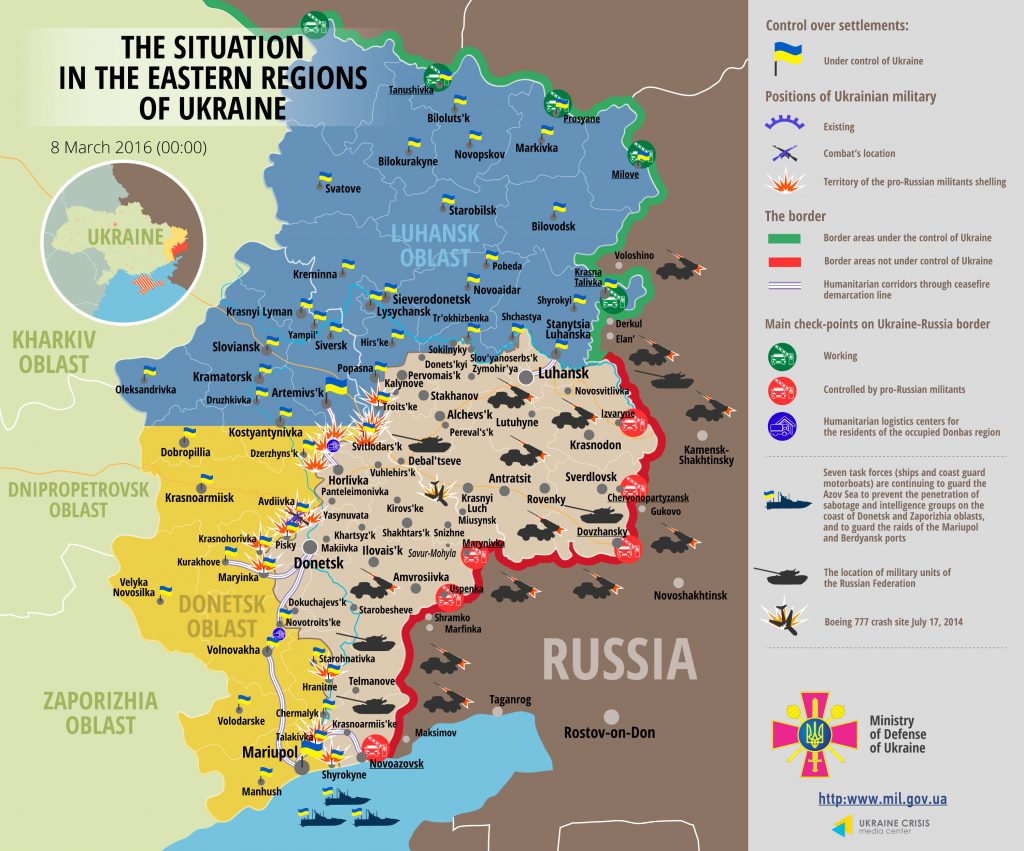 He said a total number of militant attacks in the Donetsk sector over the last day amounts to 41, one combat engagement took place. In the Mariupol sector the situation is much calmer. Militants violated ceasefire in the area around Maryinka, in Hranitne and on the contact line between Hnutove and Shyrokyne. A total of 13 attacks upon Ukrainian positions took place in the Mariupol sector. Colonel Motuzyanyk said that Ukrainian troops incurred no fatalities over the last day, three servicemen were wounded in action.

The ATO spokesman said that Ukraine’s Security Service together with the army prevented an attempt to smuggle ammunition out of the ATO zone. “The perpetrator was transporting 600 rounds of ammunition of various calibers and 21 VOG-25 grenades for under-barrel grenade launchers. The man was detained near Mariupol,” he said. In Sloviansk staff of the Donetsk criminal police department seized over 50 grenades, five grenade launchers, a Kalashnikov rifle, a pistol, a rifle and over two thousand rounds of ammunition as an apartment and a garage were searched. Colonel Motuzyanyk also said that Security Service detained a member of the so-called “Luhansk People’s Republic” (“LPR”) who joined “Kazaki” militant group in May 2014, however when Ukrainian troops advanced he deserted and returned back home where he was hiding from law enforcement staff.