Kyiv, March 9, 2016. Yesterday, there was a clash between ATO combat forces and militants in in Luhansk sector between Tryokhizbenka and Krasniy Lyman. The militants tried to seize the Ukrainian observation post. After a half-hour firefight, insurgents retreated to the south – beyond the Siversky Donets, said Col. Andriy Lysenko, Presidential Administration spokesperson on ATO related issues, at a briefing at Ukraine Crisis Media Center. In Donetsk sector, the situation on Svitlodarsk arc, around the occupied Horlivka and on Avdiyivka – Opytne – Pisky battlefront remains the hardest. “In particular, the enemy 10 times used mortars and armored vehicles onthis part of the defense line. The enemy becomes active in the afternoon, and increases the intensity of firing after sunset. There are almost no peaceful sites along the contact line. Totally, 37 militants’ shooting attacks were recorded over the past day in Donetsk sector,” said Col. Lysenko. 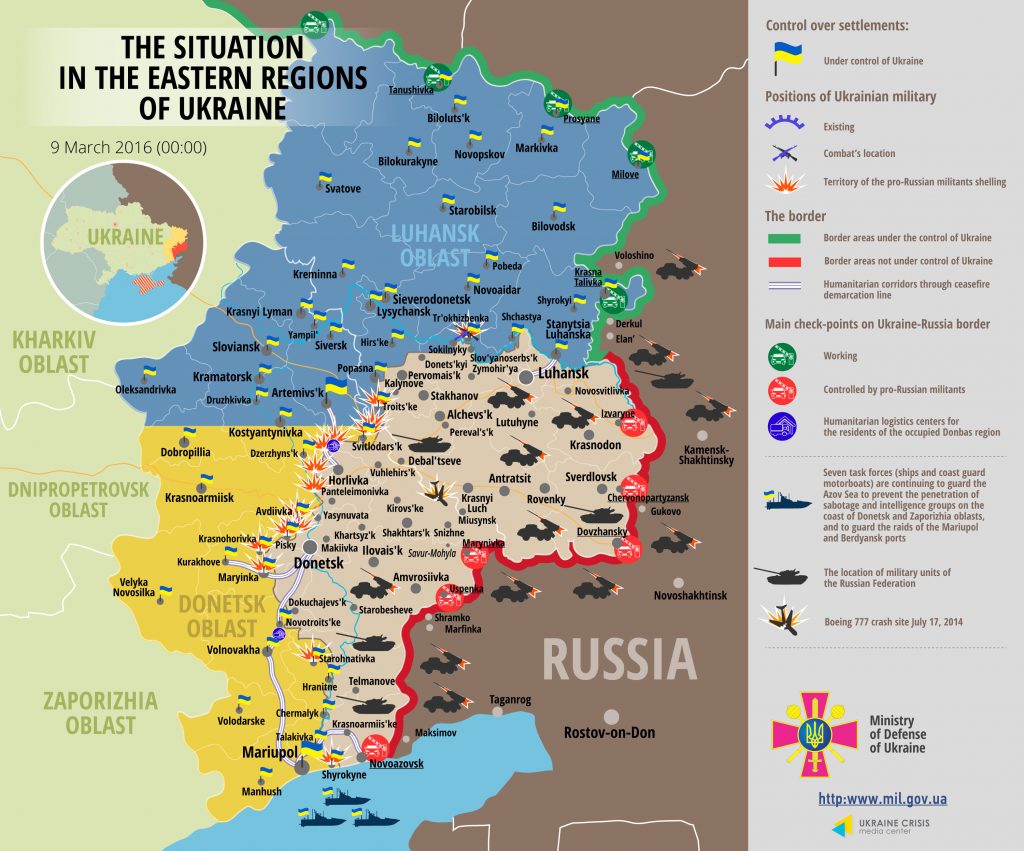 He said that militants violated ceasefire in Maryinka, Starohnativka and Shyrokyne in Mariupol sector. They used mortars and sniper fire twice.

According to Col. Lysenko, Ukrainian Armed Forces did not suffer any casualties; eight Ukrainian military were wounded.

According to the Intelligence Department at the Ministry of Defense, militants continue incuring losses in Donbas. “As a result of a military clash in Avdiyivka, the enemy suffered heavy losses: seven Russian servicemen were killed, another 19 wounded. Two Russian officers were taken to the intensive care department in Horlivka hospital,” explained Col. Lysenko. According to the intelligence, Russia continues to deliver fuel to the territory of Ukraine for the militants’ needs: four tanks of fuel were delivered to Khartsyzsk by a special train on March 8. Besides, it is proved that one of the Federal Security Service (FSB) coordinators in the temporarily occupied areas of Donbas is a Russian citizen Konstantin Gordienko, a member of the local branch of the all-Russian public organization of veterans “Combat Brotherhood” in Rostov region.