Kyiv, March 10, 2016. In the past 24 hours 42 militants’ attacks were registered in the ATO zone. There were virtually no calm areas at the contact line from Troitske to Pisky. “The situation remains the most difficult in Avdiivka and the vicinity. Militants shot from 122-mm artillery and mortar launchers, damaging two private houses. Fortunately, there were no casualties among either civilians or our troops,” informed said spokesman of Presidential Administration on ATO-related issues Colonel Oleksandr Motuzyanyk at a press briefing at Ukraine Crisis Media Center. Luhanske settlement at the Svitlodarsk bulge remains another hotspot. Militants used mortar launchers and armored vehicles and opened sniping fire. “The situation is much easier in the Mariupol sector, only seven hostile attacks in the last 24 hours. Militants violated the ceasefire in Mariinka, Hranitne and Hnutove,” he added. The armistice held in the Luhansk sector yesterday. 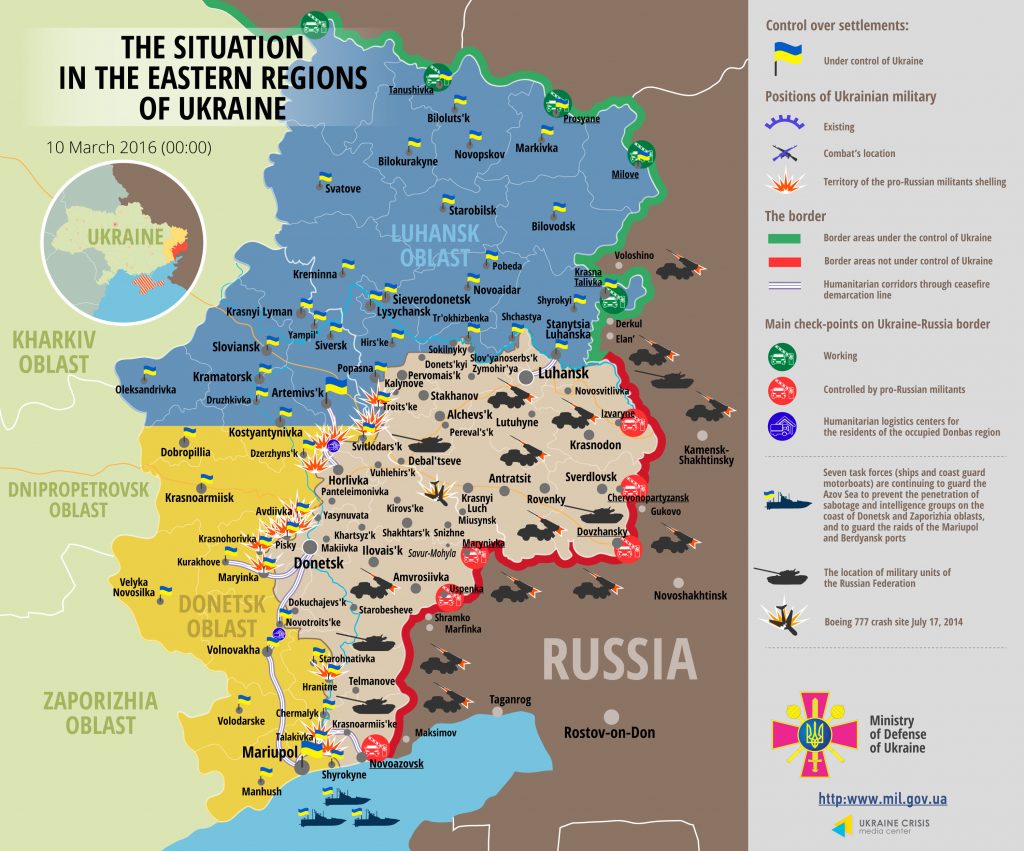 “One Ukrainian serviceman died in combat yesterday and another one was wounded,” informed the spokesman.

The Security Service of Ukraine jointly with Ukrainian troops detained two members of self-proclaimed militant group “Luhansk People’s Republic” (“LPR”). The first one, Vladislav Kondalov with nom de guerre ‘Samara’ was detained near Shchastia. “The militant has four previous convictions. In September 2014 he agreed to the proposal of Russian law enforcements to go and fight in Donbas to get clear documents without any marks and generous reward. Ukrainian investigators found so-called ‘”awards” issued by the occupants confirming his participation in combat for Debaltseve,” said Col. Motuzyanyk. Another militant was detained in Ocheretyne settlement in Donetsk region. He joined the ‘Cossacks’ in March 2015 to earn money. Having received military training he kept watch at militants headquarters and conducted reconnaissance by fire.