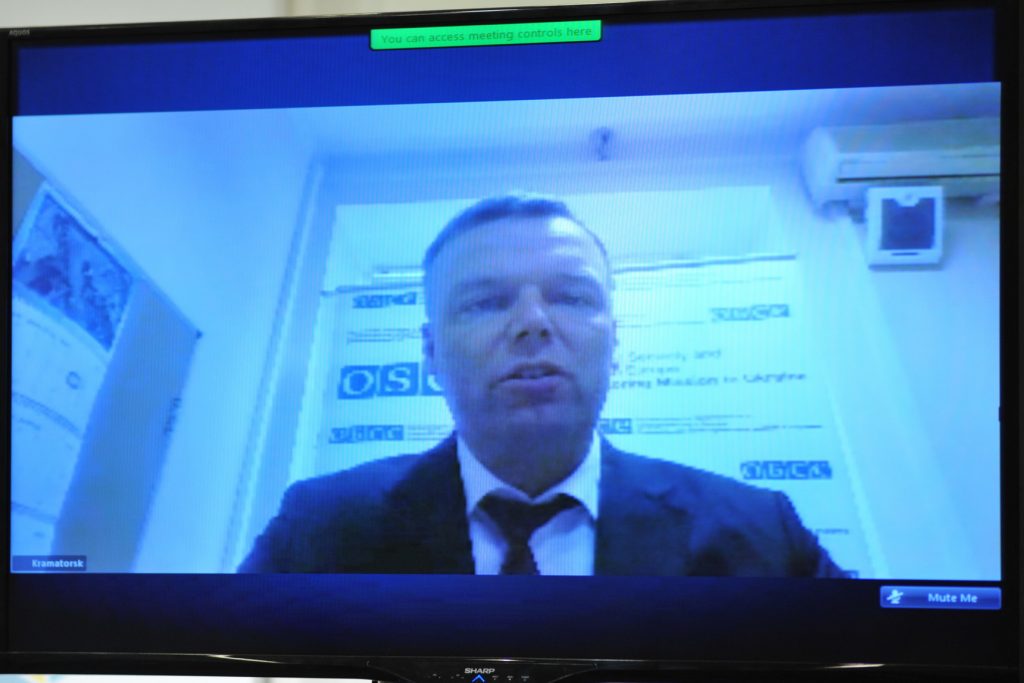 Kyiv – Kramatorsk, March 11, 2016. Results of the agreement on mine action and one on the prohibition of live-fire training in the security zone reached in Minsk on 3rd of March thus far have been mixed. The Joint Centre for Control and Co-ordination (JCCC) is in charge of coordinating the measures required to implement the agreement. The OSCE Special Monitoring Mission to Ukraine (SMM) asked for a plan outlining their proposals, so that the SMM could monitor and report on it. “Although far from fully comprehensive, we have had a positive initial response from the Ukrainian Armed Forces representation at the JCCC. Specifically, they told us they had informed the rank-and-file on the ground about the requirements of the agreement. But there has been no response yet from the Russian Federation JCCC representation”, stated Alexander Hug, Principal Deputy Chief Monitor of the OSCE Special Monitoring Mission in Ukraine at the press-briefing at Ukraine Crisis Media Center via Skype from Kramatorsk. He added that on Sunday before the decisions were taken in Minsk, the monitors recorded over 2,000 ceasefire violations in Donetsk region.

According to Mr Hug, in terms of stopping live-fire exercises in the 30-kilometre security zone, the SMM has clear indications that the Ukrainian Armed Forces are preparing to vacate their training area near Tryokhizbenka on the contact line in Luhansk region. However, the monitors have also noted the Ukrainian troops training near Troitske in western Luhansk region, which is also in the security zone.

Mr Hug noted that in terms of mine action, the SMM noted the fencing off a mined area around a Ukrainian Armed Forces checkpoint near Stanytsia Luhanska. Mine action in the 12 designated priority areas, however, has been problematic due to the incoming fire. “There has in fact been a considerable amount of violence in and around Yasynuvata. We had been recording regular “ping-pong” shelling between Yasynuvata and nearby Avdiivka, typical of the static exchanges we see all along the contact line”, added the Principal Deputy Chief Monitor. According to him, the Mission’s unmanned aerial vehicle (UAV) observed two 120-mm howitzers south-east of so-called “Donetsk People’s Republic” (“DPR”) -controlled Yasynuvata. The howitzers were firing in the direction of government-controlled Avdiivka. Also, a concentration of 35 armored personal carriers were spotted in the vicinity of “DPR”-controlled Karlo-Marksove.

Alexander Hug noted that the SMM is particularly worried about the violence seen along the Luhanske-Debaltseve road to the east of Horlivka and in areas around the crossroads in Volnovakha. “Both – like the road junctions between Yasynuvata and Avdiivka – are strategically important”, he argued.