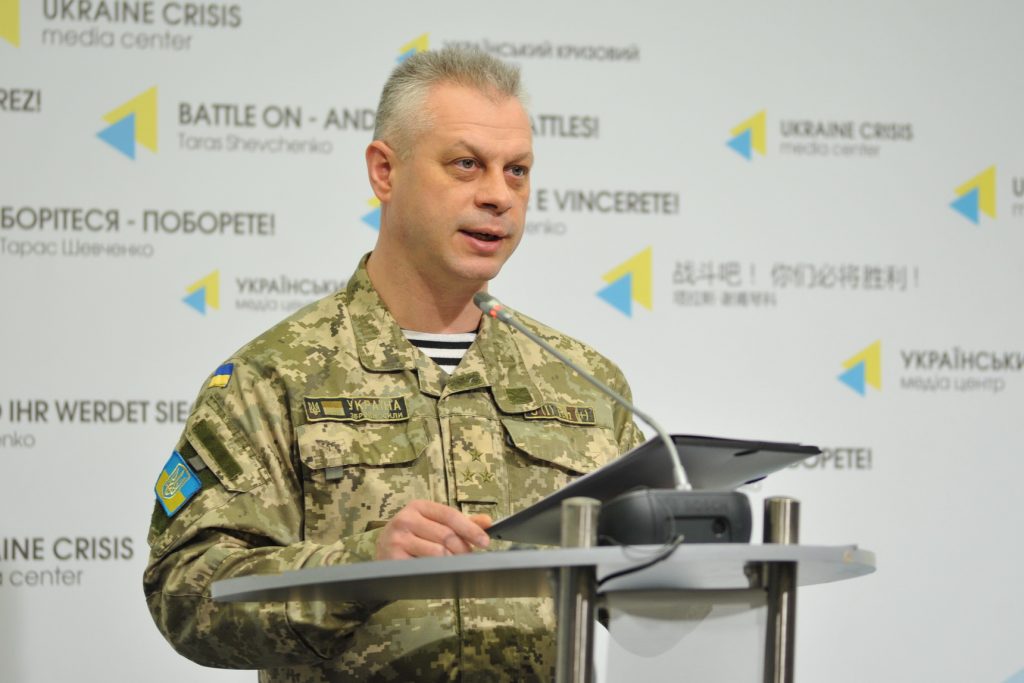 Kyiv, March 12, 2016. Militants dramatically increased the number of attacks and armed provocations. They actively used mortar launchers, armored vehicles and artillery prohibited by the Minsk agreements. Two Ukrainian troops died in combat and one was wounded. One of them died of the mortar shelling near Avdiivka and the other two troops came under fire from a hostile APC while moving to ATO forces ‘positions near Novohradske settlement, said Colonel Andriy Lysenko, Presidential Administration spokesperson on ATO related issues, at a briefing at Ukraine Crisis Media Center. 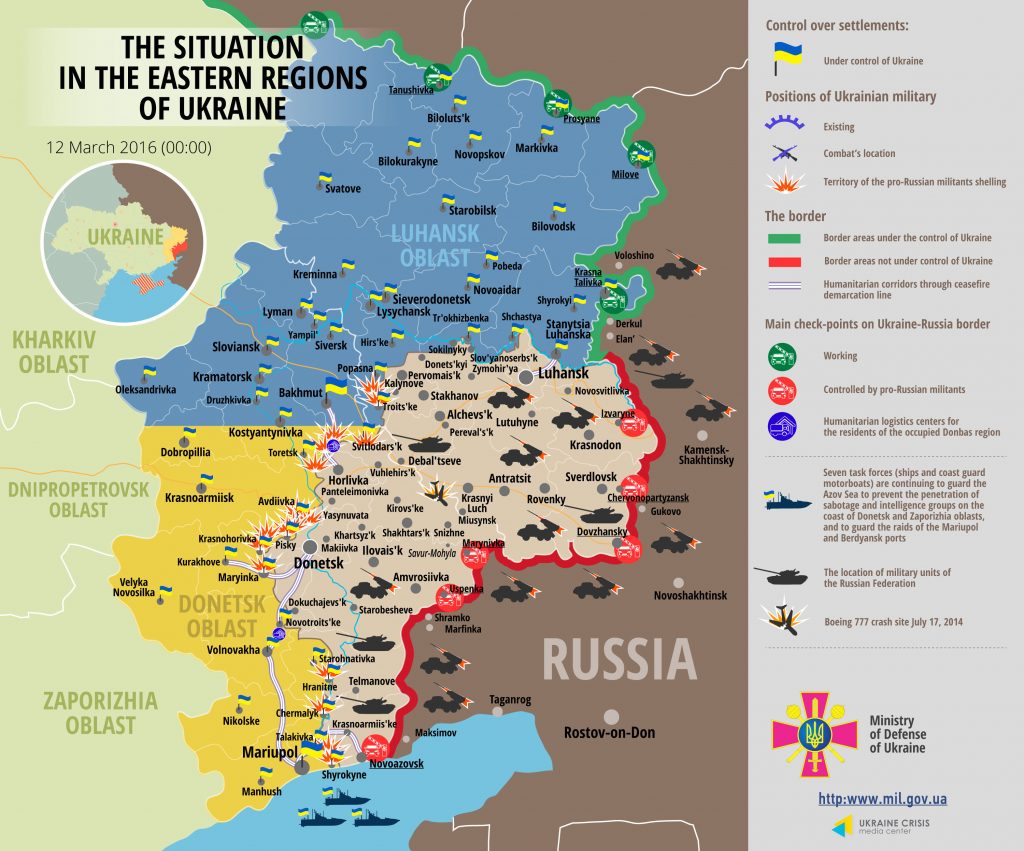 “In the Donetsk sector three areas became the epicenter of hostilities: the Donetsk airport, outskirts of Horlivka and Luhanske settlement at the Svitlodarsk bulge,” informed Col. Lysenko. According to him, militants were shelling our positions near Avdiivka, starting from tank shelling at 5:50 am and finishing with aimed fire from 120-mm self-propelled artillery mount at 6:20 pm Avdiivka was shelled from 82-mm and 120- mm mortar launchers, grenade launchers and small arms during the day. Militants were shooting from tanks twice more and once from an armored personnel carrier. “The situation was difficult near Pisky and Opytne settlements, where attacks lasted the entire day. Apart from the small arms and grenade launchers, ATO forces recorded two snipers ‘attacks near both inhabited localities. Moreover, militants shot from 120-mm mortar launcher four times, “explained the spokesman. Militants launched 54 mines from a 82-mm mortar launcher from Staromykhailivka village at our positions near Krasnohorivka, and conducted one sniping attack. According to Col. Lysenko, Zaitseve and Maiorsknear Horlivka also were the epicenter of combat. Militants shot from small arms, large machine guns and grenade launchers here. A hostile sniper was working near Zaitseve. Moreover, insurgents were shooting from small arms, large machine guns and grenade launchers neat Luhanske settlement.

According to the spokesman, in the Mariupol sector Russia-backed militant groups concentrated their attacks from 82-mm mortar launchers in the vicinity of Mariinka and Chermalyk village. “Sniping fire and multiple provocations involving use of small armes were registered in Mariinka,” he added. According to the information from the Joint Center for Military and Civil Cooperation (JCCC), a repair crew conducting repair works in Mariinka-Krasnoorivka gas pipeline came under militants ‘fire. No one was wounded, but the crew had to stop their work. Moreover, hostile provocations took place near Shyrokyne, Hranitne and Vodiane. A civilian was wounded near Mariupol. He was driving a tractor and tripped a militants ‘explosive device. “Militants instigated one armed provocation near Nobozvanivka in the Luhansk sector, using small arms and grenade launchers,” added Col. Lysenko.