Kyiv, March 15, 2016. Militants used heavy armor again in the Luhansk sector in the ATO zone. This time it was a tank launching almost two dozen shells at Ukrainian positions. The incident took place in the vicinity of Bakhmutivska road near Novotoshkivske village,” said spokesman of Presidential Administration on ATO-related issues Colonel Oleksandr Motuzyanyk at a press briefing at Ukraine Crisis Media Center. According to him, Zaitseve and Avdiivka remain two flashpoints in the Donetsk sector. Militants opened mortar fire eight times yesterday. Moreover, they violated the ceasefire in other sectors – in Luhanske, Mayorsk and Donetsk airport. In total, 29 militants’ attacks took place in the Donetsk sector yesterday. “The situation escalated in the Mariupol sector. Russia-backed militants used 82-mm mortar launchers and a tank several times. Hostile attacks were registered along the entire frontline, from Krasnohorivka and Mariinka to the Azov Sea. A total of 12 hostile attacks took place in the Mariupol sector yesterday,” said Col.  Motuzyanyk. 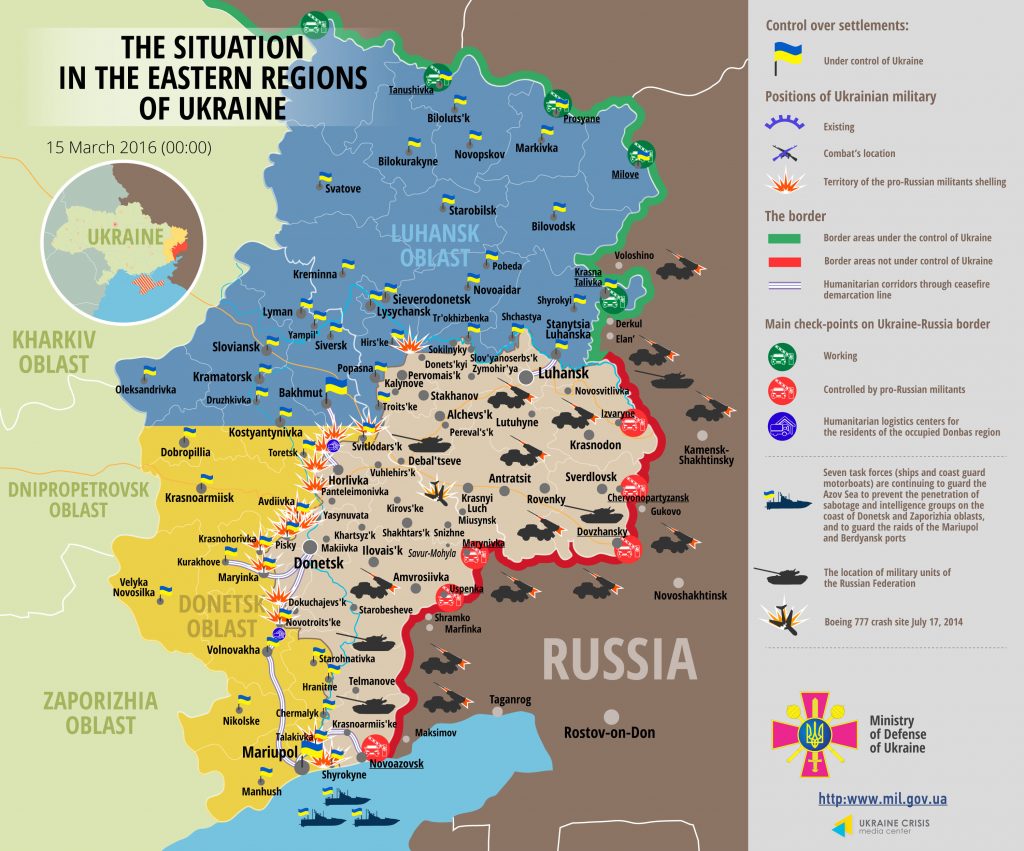 According to the spokesman, Ukrainian Armed Forces incurred no losses in combat yesterday, but two troops were wounded.

The Security Service of Ukraine detained two militants. Law enforcements jointly with border guards detained two militants, one of them being previously convicted member of ‘Vostok’ Russia-backed militant group. “Both criminals were actively participating in fighting against ATO forces, but left their accomplices because of the chief’s cruelty, non-payment of promised reward and fear for their life. They fled home where they were hiding from law enforcement agencies,” said Col. Motuzyanyk. Another former militant of the self-proclaimed “Luhansk People’s Republic” was detained in Donetsk region when he was trying to proceed to Dnipropetrovsk region using a forged passport.