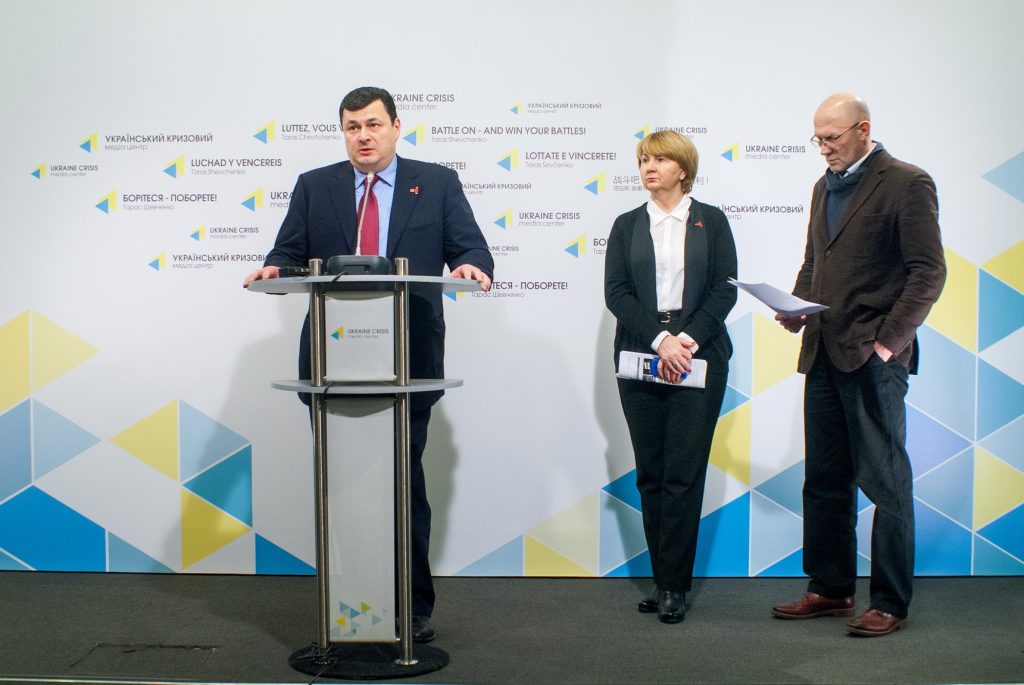 Kyiv, March 24, 2016. Oleksandr Kvitashvili, the Minister of Health of Ukraine, has told Ukraine Crisis Media Center that the situation with TB in Ukraine remains difficult. There are 28 thousand officially registered TB patients, and 10 thousand of them are infected with multidrug-resistant tuberculosis (MDR-TB), resistant to pharmaceutical treatment. Ukraine is the second in Europe and the forth in the world in terms of the latter factor. “Every year we register up to 30 thousand new cases of tuberculosis, and the disease is not revealed in time in 25% of the cases,” he emphasized at a press briefing on the occasion of World Tuberculosis Day. About 5000 patients (every sixth case) die every year, despite the fact that tuberculosis is curable.

Experts believe such a situation in Ukraine is mainly caused by uneconomical and inefficient use of state resources allocated for treatment of patients. Ukraine has sufficient expertise and resources to overcome tuberculosis. Nevertheless, there is an urgent need to conduct a TB-treatment reform, focusing it on needs of patients and their families, explained professor Andriy Slavutskyi, World Health Organization (WHO) representative in Ukraine. Natalia Nizova, director of the Ukrainian Center for Socially Dangerous Disease Control at the Ministry of Health of Ukraine, drew attention to the fact that there are 16 thousand hospital beds for TB-patients in Ukraine. “This is an unprecedented number by global standards, it is too many. Mostly the funds are spent to maintain buildings and heat them, but not to treat patients. In addition, over 50% of these treatment facilities do not meet the requirements of infection control. This means that a patient admitted to such a ramshackle hospital faces the risk of contracting a persistent form of tuberculosis,” emphasized Nizova. She believes there is an urgent need to downsize these inefficient facilities, securing proper employment of their staff, and allocate funds for treatment of individual patients, not for supporting mass patient capacity.

The Ministry of Health of Ukraine, jointly with national and international partners, is developing a new Tuberculosis counteraction program for 2017-2021. It will be based on the WHO Tuberculosis Action Plan 2016-2020 for the European Region and the WHO Global Strategy to Stop Tuberculosis. Professor Slavutskyi said that WHO Strategy is based on three elements: the first is a patient-oriented approach and the second – creating an environment for its implementation. “This includes regulatory framework, i.e. decentralization of services and their integration in primary level of medical help,” said Slavutskyi. The third element envisages creation of necessary conditions to conduct research and introduce innovations. “It is necessary to understand the origin of the TB-epidemic better, define priorities and efficiently invest resources,” explained Slavutskyi. “We need to improve the existing programs, taking into consideration both the financial situation and the conflict in the east,” stated Kvitashvili. He said that it was in Donbas where 15% of all the TB-patients lived before the hostilities started. Deterioration of the epidemic is predicted: first of all, TB-patients moved to other regions of Ukraine, second of all, people who did not leave the ATO zone often have to access to proper treatment. “We have huge support from the international community, for tuberculosis is not a separate problem of a separate country. We are a part of Europe and it is important for European people to free all of Europe from this disease,” said the minister. He emphasized that TB-combating measures are a subject of international commitments of Ukraine in part of implementing provisions of EU-Ukraine Agreement of Association.

Kvitashvili said that this year antituberculous drugs were purchased via international organizations and local tender procedures, managing to save 50-60% of funds. He explained that such considerable price difference became possible due to “cutting out corruption, i.e. kickbacks, intermediaries etc.,” as well as due to the fact that supplying companies set lower prices than expected. For instance, Nizova said, this year it was the first time that Ukraine introduces and purchased bedaquiline, delamanid and pretomanid – novel antituberculous drugs considered to be the most effective in the world at present. “For instance, a MDR-TB patient is treated for 1-2 years. Use of these drugs will reduce period of treatment of heavy TB-patients to six months. Moreover, they give a real chance for recovery of patients previously considered incurable,” explained Nizova.

At the same time, experts emphasize that efficient state policy alone is not enough to improve the situation, for a primary cause of high incidence rate of tuberculosis is careless health behavior of citizens. People rarely undergo examinations, so in 25% cases they are not aware of their disease. Even when the symptoms are evident, patients tend to seek medical help too late. In these cases the treatment is more complicated and lengthy in comparison with early stages. Moreover, when the disease has been found and treatment assigned, some patients are irresponsible and do not follow doctor’s instructions, or even lose faith and stop taking medicine. “The most difficult task is reaching over to people from socially vulnerable groups. These are the people the most affected with TB disease. They often suffer from coexisting diseases – HIV, hepatitis and drug addiction,” said Slavutskyi.

The minister also added that the Ministry of Health is planning to launch an extensive awareness campaign helping people “learn how to prevent a disease, whose help to seek and how to undergo treatment”.