Kyiv, March 24, 2016. Militants shot 31 times in the Donetsk sector in the ATO zone yesterday, mostly in the afternoon. “The adversaries are actively using heavy armor, 82-mm and 120-mm mortar launchers, along the entire frontline. These incidents were observed at the Svitlodarsk bulge (Troitske and Luhanske), near Horlivka (Zaitseve and Maiorsk) and in the vicinity of Donetsk (Avdiivka and Pisky). Over 40 mortar shells were launched at our positions,” informed Colonel OleksandrMotuzyanyk, Presidential Administration spokesperson on ATO related issues during a press briefing at Ukraine Crisis Media Center. The situation is the most difficult near Avdiivka, where Ukrainian troops are regularly responding with fire to stop militants’ provocations. 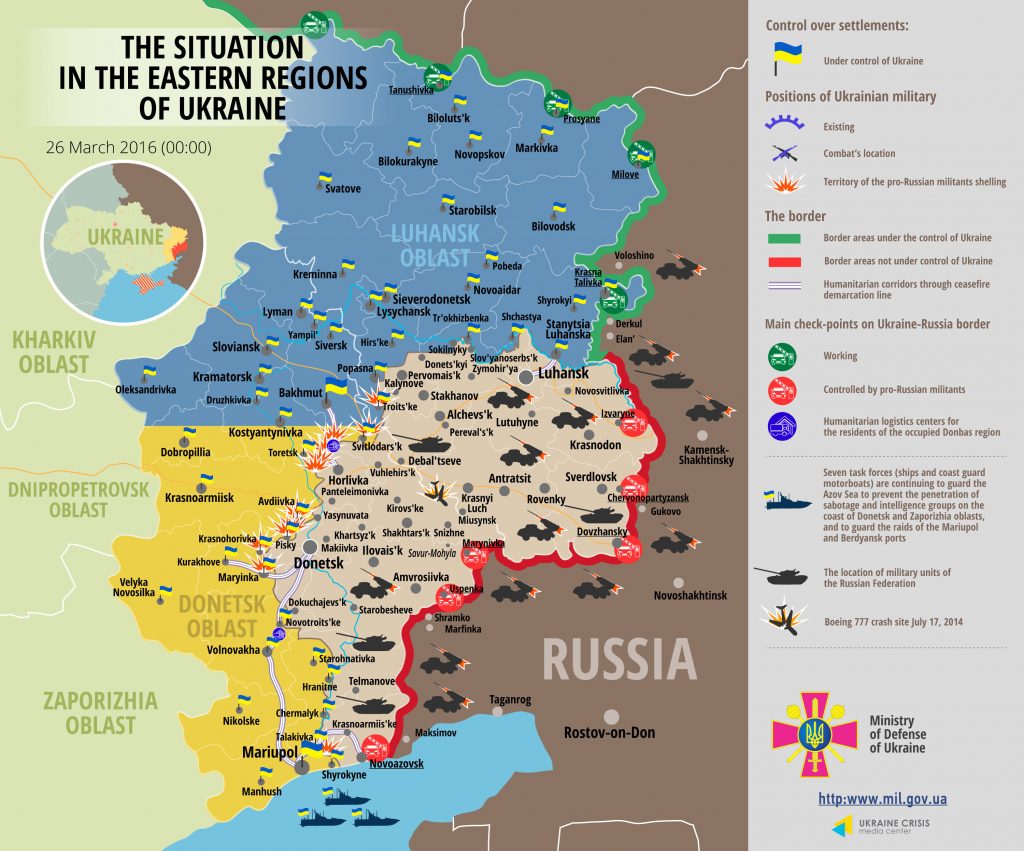 Militants shelled ATO troops’ positions in the Mariupol sector six times. “The situation was the most restless in Mariinka where enemy conducted a number of attacks. The ammunition exploded on-site. Moreover, Russia-backed militant groups violated the ceasefire in Krasnohorivka and near Vodiane village,” said the spokesman. The armistice held in the Luhansk sector yesterday.

Two Ukrainian troops died in combat yesterday and eight were wounded. Moreover, three more servicemen of the National Guard of Ukraine were wounded as a result of tripping an explosive device. “A private building was destroyed this morning as a result of militants’ shelling of Zaitseve village. An elderly woman was wounded. Three more people were saved, they suffered no injuries,” said Col. Motuzyanyk.

Law enforcements detained a shooter from Russia-backed militants groups ‘Oplot’ in Toretsk. He has been involved with militants since August 2014. Moreover, police found a plastic bag with two mines and a trigger on motor road in Bakhmutiv district. A weapons cache was found in Novomykhailivka, Mariinka district, Donetsk region. “Police officers jointly with the National Guard of Ukraine found eight grenades, anti-personnel mine, an explosive device, five bags of gunpowder, ammunition and military uniform with insignia of the self-proclaimed “Donetsk People’s Republic” (“DPR”),” informed the spokesman.

The spokesman informed that the President of Ukraine signed an order on demobilization of servicemen drafted during the 4thstage in winter last year. “The demobilization will take place in March-April 2016,” he explained.