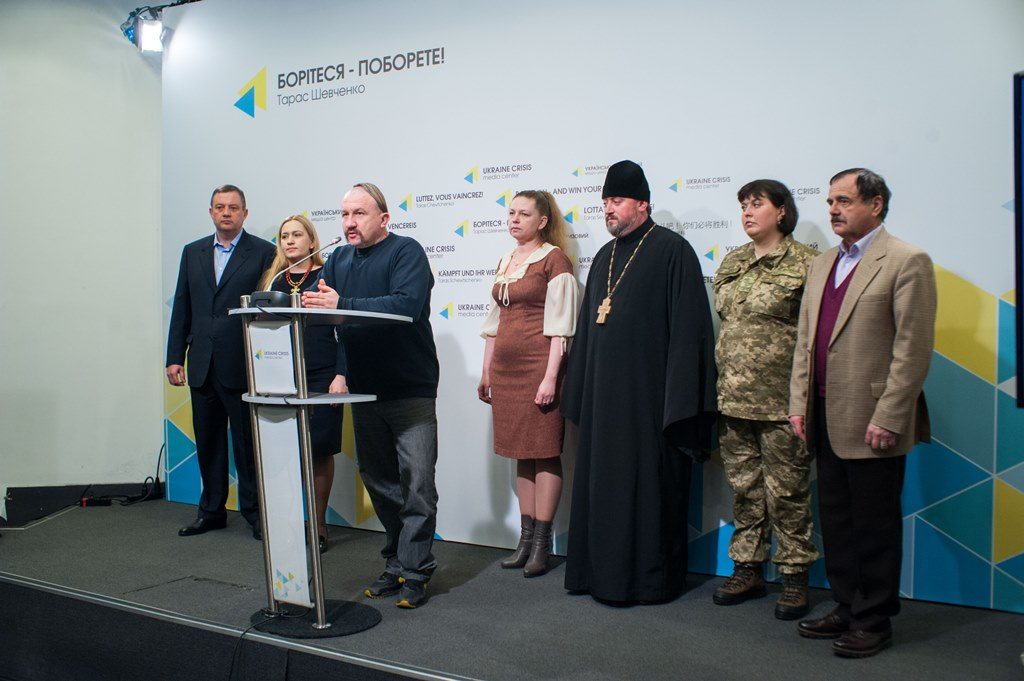 Kyiv, March 31, 2016. There is a lack of everything Ukrainian in the towns nearby the contact line. “It is in the air in Kramatorsk, Druzhkivka, Volnovakha and Sloviansk that years of impact of Ukrainian culture are missing. And children are thirsty for it,” said Sashko Lirnyk, author of fairy tales, artistic director of “Agit-tran” presenting the project at a press briefing at Ukraine Crisis Media Center. He said many artists want to showcase Ukrainian culture in the east, there are already over 50 artists ready to perform for children. Meanwhile Agit-train heading to eastern Ukraine is a pilot project, however the organizers hope that it will become a permanent one. “It is important that the project becomes permanent, because Ukraine wins where Ukrainian culture and language is. Where it is not “Russian world” usually comes in with tanks,” emphasized the artistic director of Agit-train.

The Church has long made a decision to help the Ukrainian army and civilians in the east, noted Archpriest Taras Melnyk, First Deputy Head of the Synodal Department of the Military Clergy of Ukraine. The Church sends 50-70 chaplains to ATO zone monthly, they are working with military and civilians. Spiritual support in eastern Ukraine will be one of the components of Agit-train project. Part of the Agit-train will be equipped as a chapel, there will be a chaplain on the train. Our chaplains who are coordinators on the spots will be joining the train at respective stops. All the chaplains deployed to military bases in this area will be jointly conducting this work. Their presence will come as not only a sign of patriotism but they will also bring spirituality and hope for peace to the military and civilians,” the Archpriest explained.

The train is a symbol of spirituality and eternity, noted MP Oksana Yurynets. “We would like that this exchange continues, that the east and the west will always be together. If we are not doing this, if we do not start it, we will not see that the country can change and unite,” the MP says. She said in the framework of the project books will be sent to children in the east. Next train going to the east on Easter will bring the children wooden “Pysanky” (painted eggs) with paints that the children may use to color the eggs.

MP Yaroslav Dubnevych, Head of the parliamentary committee on transportation emphasized the importance of engaging in the work to popularize the Ukrainian heritage and culture. “We should go to the east and be explaining to the Ukrainian population that has been disenchanted and that had little information […] what the Ukrainian authorities and civil society wants, what we as Ukrainians want to do together in our country. Our strength is in our unity and it is the most important thing,” emphasized Dubnevych.

Iryna Sydorenko, volunteer of the group “Kramatorsk Bees” said that in the framework of Agit-train project it is planned to make camouflage netting, Kikimora ghillie suits, to present Ukrainian books and a festival of Ukrainian fairy tales. “However our first task is the national and patriotic education as well as ‘soft Ukrainization’,” the volunteer noted.

Emergency medical service will accompany the Agit-train, said Anatoliy Vershygora, Director of the Kyiv Center for emergency and disaster medicine. In case of need the experts will be providing medical assistance as well as will be holding master classes on pre-hospital medical aid provision to both adults and children. “Our main task is to teach the children to render medical aid to themselves and to each other,” he explained.

Both volunteers and state services are engaged in the Agit-train, the organizers said. “It became possible to fully implement the Agit-train project only thanks to the support people gave us on volunteer basis,” emphasized Mykola Bondar, Kish Otaman (Cossack military rank), Head of NGO “KoloMedia”.