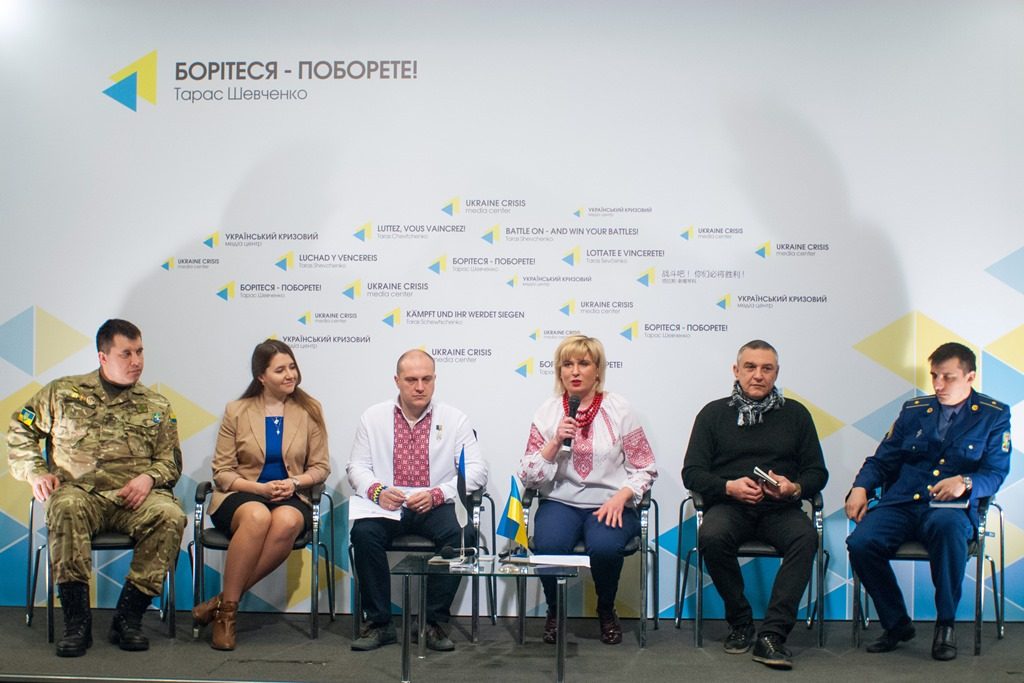 Kyiv, April 1, 2016. Eighty tactical medicine instructors were trained in Estonia over 2015-2016. The overall cost of training that Estonia has covered constitutes EUR 170 thousand, said Hanna Mayboroda, tactical medicine instructor, graduate of the 1st group of TCCC course in Estonia, Head of the Board at NGO “All-Ukrainian Association “Patriot” speaking at a press briefing at Ukraine Crisis Media Center. She emphasized the importance of the course for Ukrainian paramedics that the country was continuously providing to Ukraine.

“They have actually shortened the course but the level of the knowledge and skills that we got there actually allows us to make our knowledge part of the [Ukrainian] system. It allowed Ukraine to get 80 instructors certified according to the 4th international level. That’s a mandatory level for all tactical medical staff from sanitary instructors to heads of medical service at the battalion level,” noted Mayboroda. She said a total of four groups 20 persons each have been trained in Estonia. Among the ones who were trained 29 volunteers, 36 Ukrainian Armed Forces staff and others. Upon their return in Ukraine they are passing their knowledge to others including the military on the contact line and volunteers with various professional background, who wish to get trained in tactical medicine”.

“Tactical first aid kit is just a bag with a set of instruments and medical supplies. […] It is impossible to render medical aid without proper training and the knowledge on how to use it,” noted the tactical medicine instructor. Apart from the actual training Estonia was providing medical supplies to Ukrainians. They include the items that were lacking on the frontline especially in the beginning of the combat actions in the east. “A total of 274 bags for sanitary instructors destined for work in small groups, 21 big bags for paramedics, IFAKs [individual first aid kits], stretchers and manikins. […] Medical items worth of EUR 230 thousand in total have been collected. It is a huge sum for Estonia,” said Mayboroda.

Vladyslav Lektor, tactical medicine instructor, deputy head of medical service of Aidar battalion, said that the intense training course in Estonia lasted 10 days. “Estonian officers who conducted the training took part in the NATO missions to Iraq and Afghanistan, and understood what it is all about. Knowing what the war is they were training us based on that, presented the protocol applicable to the conditions that we would later find ourselves in,” explained Lektor. He also noted that they were trained in a way to be later able to train others in Ukraine and pass their knowledge and skills to them. “I assume that I have trained 130 sanitary instructors, and about 30-40 persons from the medical service in conditions of the ATO zone where they are currently based,” said the tactical medicine instructor. He also added that not only military but civilians as well need to get trained in tactical medicine. That’s why graduates of the course are also training Ukrainian policemen, firemen, emergency service workers etc.

The project sets preconditions for further cooperation between Estonia and Ukraine, as Estonia seeks to share experience in a maximum way possible so that others are able to later use it, noted Anastasiya Mykhailova, Project Coordinator, Humanitarian Assistance and Development Cooperation at the Embassy of the Republic of Estonia to Ukraine. “By providing the metaphorical ‘fishing rod’ – the instrument one may be using later instead of just providing supplies that are necessary as well but tend to end anyway,” explained Mykhailova.

“Tactical medicine applies in case of three deficits: time, information and resources,” emphasized Roman Babych, Lieutenant of medical service, head of the medical service of the 1st battalion of the 93rd mechanized brigade in October 2014 – September 2015, participant of the first TCCC group in Estonia. He said Estonian partners were providing the knowledge that is saving lives. Ukrainians did not possess this knowledge in the beginning of the combat actions, otherwise many lives could have been saved. “Knowledge we get in Estonia allows us to train people of any background,” noted Babych. The instructor gives comprehensive knowledge that will allow rendering medical aid to the wounded based on the algorithm in the right way. Moreover not only medics are being trained, noted the Lieutenant of the medical service, but soldiers as well. They need to be able to provide first medical aid to themselves and to their brothers-in-arms in case of a need.

“My doctor’s way of thinking was re-arranged and made simple and tactical. Simple and appropriate things are saving lives,” noted Yuriy Marchenko, head of the medical service of Donbas battalion, graduate of the first round of training in Estonia. These are simple yet important things they were taught in Estonia. According to Yuriy Marchenko in comparison to the start of combat actions the number of sanitary losses and critical injuries are way smaller, because there are already certain skills and knowledge.

Dmytro Kavyda, Major of medical service, professor of the department for medical provision management at the Military-and-Medical Academy of the Ukrainian Armed Forces, graduate of the fourth training round in Estonia says that current state standards for individual training of servicemen take into consideration tactical medicine knowledge that graduates of the first and the second training rounds for instructors in Estonia gained. The Major of medical service said that the Military-and-Medical Academy has started implementing the Estonian experience. “Curricula for both reserve officers and our students have been updated, they will include more practical aspects. Practical classes on how to organize medical service and supplies have been partly introduced into the curriculum,” said Kavyda.

Hanna Mayboroda noted that many people in Ukraine have passed tactical medicine training. “According to official statistics 65 thousand servicemen mobilized within the third wave were trained on training grounds last year. These were the training sessions by volunteers of various initiatives including instructors that had been trained in Estonia,” said Head of Board at Patriot NGO. The NGO plans to establish the training system directly in Ukraine already this year and set up instructors’ center where tactical medicine skills will be taught.