Kyiv, April 2, 2016. According to the Chief Intelligence Department of the Ministry of Defense of Ukraine, Russia-backed militants received another batch of weapons, military equipment, ammunition and other war-fighting resources. “An echelon arrived at Khartsyzk railway station carrying four multi-purpose light-armored towing vehicles, ten trucks, 120 tons of combustible and lubrication materials and three wagons with spare parts for tanks. Echelon with 240 tons of combustible and lubrication materials came to Krasnodon railway station, and 15 tanks and seven trucks with ammunition were brought to Luhansk,” said Colonel Andriy Lysenko, spokesman of Presidential Administration of Ukraine on ATO-related issues at a press briefing at Ukraine Crisis Media Center. 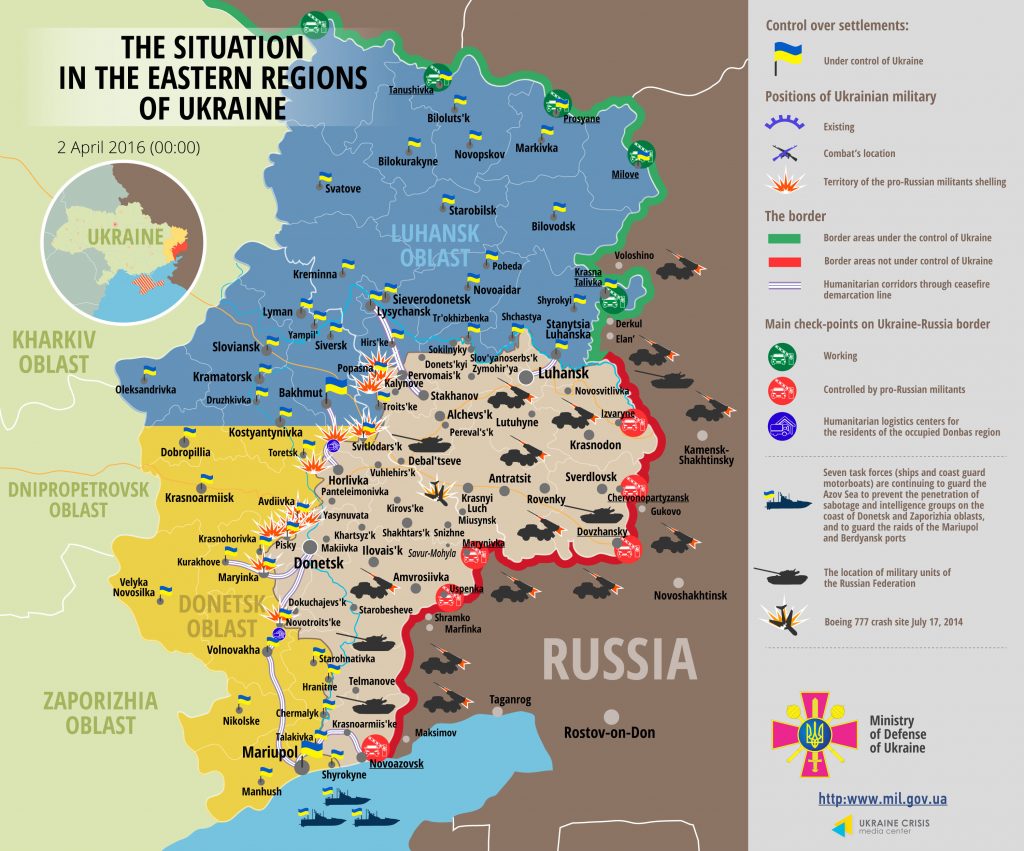 Militants continue shelling ATO troops’ positions in all the sectors. Russia-backed militants violated the armistice eight times in Popasna district in the Luhansk sector of the ATO zone. In all the cases militants shot from the direction of villages adjacent to temporarily occupied Pervomaisk. “46 hostile attacks took place in the Donetsk sector. Same as before, Zaitseve and Avdiivka remain the flashpoints. Moreover, the enemy became active to the south, in the vicinity of Pisky and Nevelske. A total of 90 mortar shells were launcher at our positions yesterday,” said the spokesman.

Mariinka became the centre of hostilities in the Mariupol sector. Militants repeatedly opened sniping fire and used rocket-propelled grenade launchers and small arms. Moreover, they shot twice from an anti-tank rocket system in Novotroitske. “Flight of a militants’ unmanned aerial vehicle was observed in the vicinity of Lebedynske village. In total, 11 hostile attacks took place in the past 24 hours in the Mariupol sector,” informed Col. Lysenko. Ukrainian Armed Forces incurred no losses in combat yesterday, and four troops were wounded.

Officers of the Security Service of Ukraine and police together with servicemen of the National Guard of Ukraine detained a militant in Popasna district of Luhansk region. “It has been identified that the militant was keeping watch at a checkpoint of Russia-backed militants in May-June 2014, but quickly disappointed with the “Russkiy Mir” ideas. He was afraid of the advance of Ukrainian troops, laid down arms and returned home, where he was hiding from law enforcements. An unauthorized shot-gun was seized from the militant during search,” informed the spokesman.