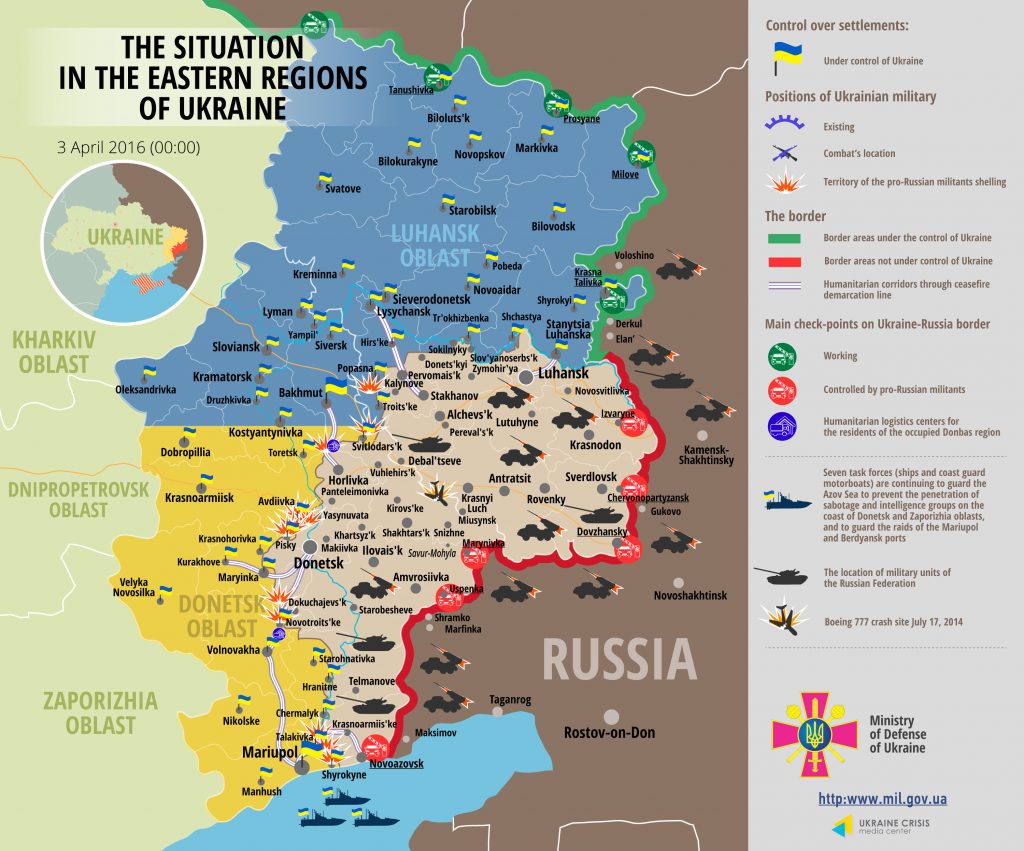 Two militants’ provocations took place in the Luhansk sector in Popasna-Sviltodarsk area. In the Donetsk sector Russia-backed militant groups violated the ceasefire in Mayorsk and in Avdiivka-Pisky area. The armistice held in all the other sectors. “Traditionally, the biggest number of militants’ attacks was registered in the vicinity of Avdiivka where the enemy used mortar launchers several times. In total, 15 militants’ attacks took place in the Donetsk sector,” said the spokesman. Moreover, Russia-backed militants violated the armistice nine times in the Mariupol sector. “The majority of insurgents’ provocations were observed in Hnutove-Shyrokyne area,” added Col. Motuzyanyk.

Chief Intelligence Department of the Ministry of Defense of Ukraine published information regarding militants’ losses in several past days. “Seven occupants, including two female snipers, died yesterday near Stakhanov as a result of a truck tripping their own mine field. The militants served in the ranks of so-called “6th separate motorized rifle regiment of the 2nd army corps” of the self-proclaimed “Luhansk People’s Republic” (“LPR”),” informed the spokesman. Moreover, six militants of the self-proclaimed “Donetsk People’s Republic” (“DPR”) died in the last five days, three militants were wounded. Two insurgents from the so-called “3rd separate motorized rifle regiment of the 1st army corps’ of the so called “LPR” died as well.

Officers of the Security Service of Ukraine detained a drafted serviceman of the Armed Forces of Ukraine. He was a commander of a reconnaissance group and turned out to be an agent of Russian special services. “He was supplying the enemy with information regarding fighting positions of his unit and the place of operation of reconnaissance groups of the Armed Forces of Ukraine. As his ‘curators’ required, the traitor was trying to persuade his fellow soldiers to turn over to the enemy. For his actions he was promised a plum job in the criminal organization “Ministry of Defense of DPR” and residential property,” said Col. Motuzyanyk.

Moreover, the spokesman informed that police officers detained militants’ accomplices in Sloviansk. They actively participated in organization of separatist pseudo referendum in May 2014. Moreover, the detained have been collecting information regarding location, number and proceeding of the Armed Forces of Ukraine since the end of 2014 and passing it to militants.