Kyiv, April 5, 2016. Militants dramatically increased number of attacks at Ukrainian troops’ positions in all the sectors of the ATO zone. Two Ukrainian troops died in combat and 10 were wounded. Militants shot 39 times in the Donetsk sector yesterday, nine attacks involved use of mortar launchers. Zaitseve, Novhorodske and Avdiivka remain the main flashpoints. “Hostilities continue round-the-clock in the key points of defense where distance is minimal between our and enemy’s positions. The enemy continues its attempts to expand the controlled territory, keeps heavy armor at the frontline and delivers intense fire, said Colonel Andriy Lysenko, spokesman of Presidential Administration of Ukraine on ATO-related issues at a press briefing at Ukraine Crisis Media Center. Moreover, the Chief Intelligence Department of the Ministry of Defense of Ukraine (CID MDU), militants set new platoon strongpoint in Zaitseve near school No.15.The situation was restless at the Svitlodarsk bulge and in the vicinity of Donetsk airport. 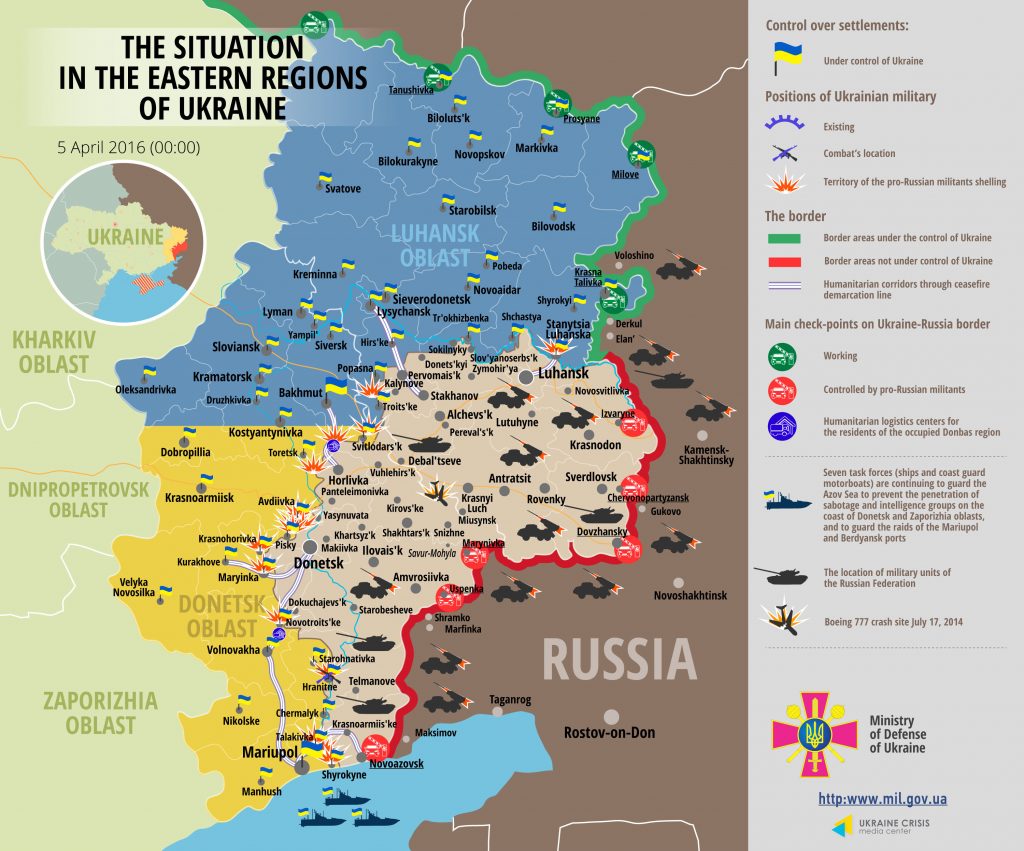 Seven attacks took place in the Luhansk sector yesterday: militants instigated a series of provocations near Stanytsia Luhanska. A mortar launcher was used near Novozvanivka village in the Popasna district. The situation was difficult along the entire frontline in the Mariupol sector. “Our troops defeated the attack of militants’ subversive reconnaissance group near Hranitne. The group came from the opposite bank of the Kalmius River intending to seize our stronghold. Occupants’ snipers were shooting in Mariinka,” informed the spokesman. “The total of 14 hostile attacks and one firefight took place in the Mariupol sector yesterday,” he elaborated.

According to the CID MDU, 18 fuel rail cars carrying combustible and lubrication materials (720 tons) came to Krasnodon railway station and eight trucks carrying ammunition for militant groups of self-proclaimed Russia-backed republics on April 3. Four fuel rail cars and the nearby carriages with coal burned the next day as a result of fuel ignition. “Regular exercise of so-called “2th separate motorized rifle regiment of the 2nd army corps” of the self-proclaimed “Luhansk People’s Republic” was frustrated because of the incident,” said Col. Lysenko.

Officers of the Security Service of Ukraine detained a local inhabitant in Bakhmut (Donetsk region).The detainee was informing militants on ATO troops’ disposition in this area. Moreover, law enforcements managed to prevent a subversive act at the railway. “A 152-mm artillery shell with plastid of around 200 grams was found under a concrete pole of a railroad bridge. Railway traffic was temporarily ceased for the time of rendering the explosive ordnance safe,” said Col. Lysenko. Moreover, an officer of the State Border Guard Service was detained in Lviv. The woman turned out to be an administrator of several separatist communities in social media and was propagating creation of new quasi states on the territory of Ukraine.