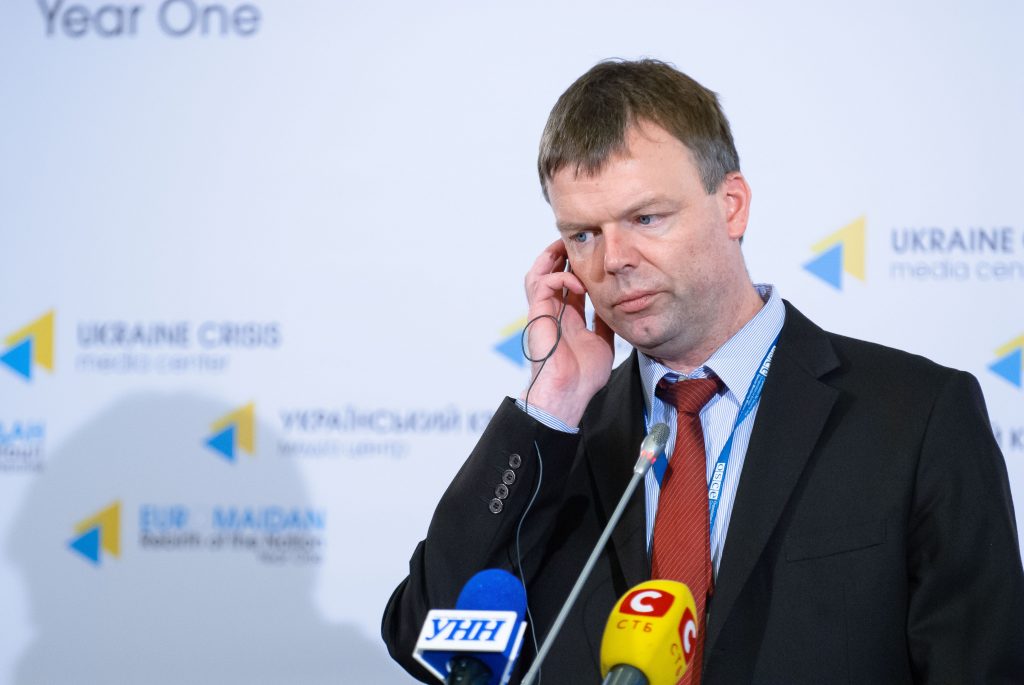 Kyiv, April 8, 2016. Over the last weeks the Special Monitoring Mission of the OSCE observed a high level of ceasefire violations in multiple locations along the contact line, in particular in Donetsk region. “Mortars and larger caliber artillery are now being used in huge numbers. The number of explosions attributed to the indiscriminate use of such supposedly withdrawn weapons reached over 700 in the course of last week. This is the highest number of explosions recorded in a week since autumn last year”, stated Alexander Hug, Principal Deputy Chief Monitor of the OSCE Special Monitoring Mission in Ukraine at the press briefing at Ukraine Crisis Media Center. The vast majority of ceasefire violations were recorded in the area of government-controlled Avdiivka and controlled by the so-called “Donetsk People’s Republic (“DPR”) Yasynuvata. “On Monday we recorded nearly 400 explosions – 260 of those in a 30-minute period,” he informed.

Alexander Hug stressed that so-called “DPR” and “Luhansk People’s Republic” (“LPR”) members continued to restrict and impose conditions on the SMM’s monitoring in Yasynuvata, despite the intervention from the Joint Centre for Control and Co-ordination (JCCC). “In a serious incident just yesterday, an SMM vehicle was shot at and damaged in the vicinity of non-government controlled Snizhne. Later the same day, so-called “LPR” members stopped the SMM near Smile and pointed weapons at our monitors,” said Mr. Hug. He also added that functions of the JCCC are currently neither joined, nor coordinated. “This state of affairs is not conducive to reducing tension”, he stressed.

Mr. Hug has informed that the SMM has seen “little systematic or organized action on the ground” related to the implementation of decision on demining action. “Some warning signs are in place, the Ukrainian side has undertaken some mine-risk outreach, including a TV campaign, but much more needs to be done”, explained the Principal Deputy Chief Monitor of the OSCE SMM. Moreover, last week the monitors observed the Ukrainian Armed Forces laying mines in Zolote, they also observed a number of mines in Petrivske, controlled by the so-called “DPR” and close to the so-called “LPR” checkpoint near the Stanytsia Luhanska. “The placing of new mines is a violation of the Minsk package and runs counter to the recent decision”, stressed Mr. Hug.

The SMM continued to facilitate efforts to repair essential civilian infrastructure, in particular the gas pipeline between government-controlled Marinka and “DPR”-controlled Oleksandrivka. “However, the work was called off with just 300 metres of pipeline after the workers came under small-arms fire”, he added.

Alexander Hug informed that the civilians are still facing difficulties at the checkpoints and there is still an absence of co-ordination between the sides on the opening of new crossing points. “Today’s decision to close the only official crossing over the bridge at Stanytsia Luhanska for security reasons will increase this frustration,” added Mr.Hug. He informed that “both in Stanytsia Luhanska and Zolote, the SMM stands ready to facilitate dialogue between the sides”.