April 9, 2016. Russia – backed militants conducted 73 attacks upon the ATO troops’ positions in the ATO zone yesterday. The armistice held in the Luhansk sector. Militants launched over 50 mortar shells in the Donetsk sector in the vicinity of Avdiivka. Russia – backed militants attacked Ukrainian positions around midnight using Gvozdika self-propelled artillery mounts. As a result of these attacks, an elderly woman died and two buildings were damaged in Avdiivka. “Militants shot at the Svitlodarsk bulge using armored vehicles. Militants continue mortar attacks in the vicinity of Horlivka and near the Donetsk airport. In the Mariupol sector Russia -backed militants shot from artillery south of Pavlopil water reserve, launching over 10 shells at Ukrainian positions. Moreover, hostile provocations took place in Shyrokyne, Hnutove and Novotroitske.  Militants’ snipers were active near Mariinka,” informed Colonel Andriy Lysenko, spokesman of Presidential Administration on ATO-related issues at a press briefing at Ukraine Crisis Media Center. 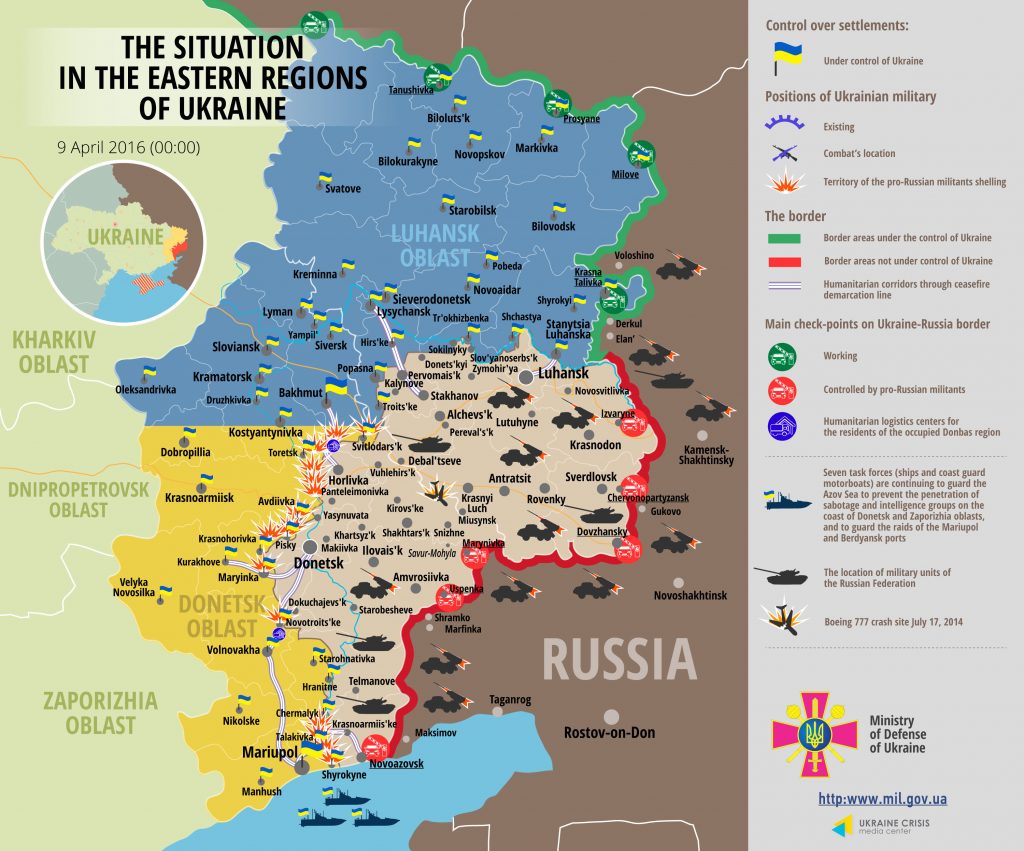 “Moreover, increase in enemy’s combat losses was registered. Nine died were delivered to the Donetsk morgue and 21 wounded were admitted to Donetsk hospitals. One Russian serviceman died and five were injured recently. They took part in subversive reconnaissance groups near Shyrokyne,” elaborated the spokesman.

Ukrainian Armed Forces incurred no loss in combat in the past 24 hours, five troops were injured. Four troops were wounded near Avdiivka and another one in the vicinity of the Donetsk airport.

According to Col. Lysenko, officers of military counter intelligence of the Security Service of Ukraine revealed and detained two agents of Russian special services. “These were a father and a son tasked by the Chief Staff of the Armed Forces of the Russian Federation to bribe soldiers and officers of the Armed Forces of Ukraine in order to receive information on combat units and subdivisions of the Ukrainian army in the ATO area. The traitors were detained in Senkivka checkpoint when they were trying to flee to Russia. Important papers they planned to give to Russian special services were seized from them. Two men are known to have received Russian citizenship recently,” summarized Col. Lysenko.