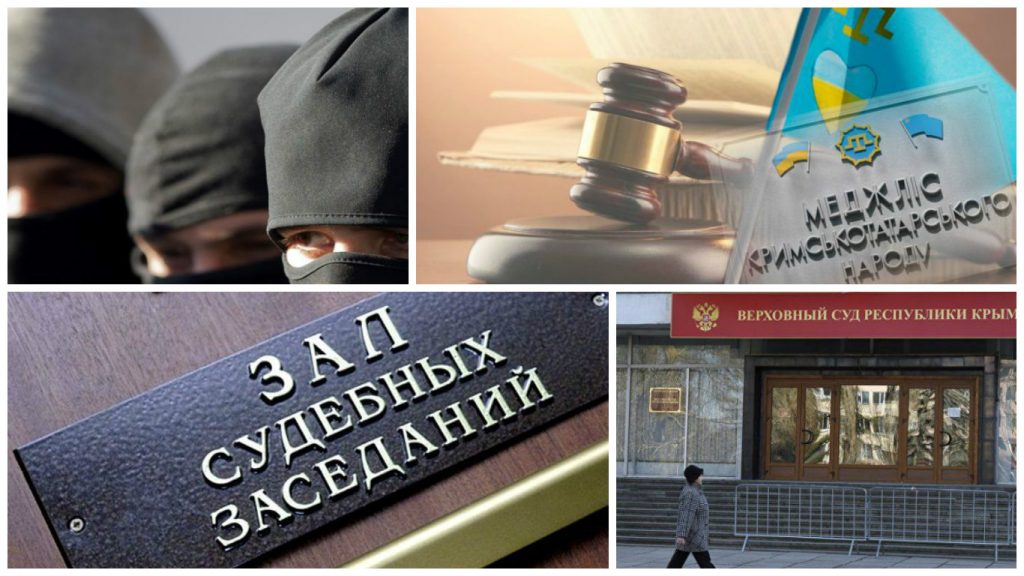 Russian security services tried to search Ali Ozenbash’s house back in December 2015. However, the Head of the Kurultai’s Audit Commission was not in at the time Federal Security Service and police officers arrived. According to eyewitness reports, 10 unidentified armed men wearing masks and combat fatigues raided a bakery located near Simferopol’s Marino district on April 5. They were accompanied by several plain-clothed men.

– As it turned out, the raid was part of an anti-immigrant operation carried out by the Federal Migration Service which was tipped off that Uzbek nationals were employed at the bakery.

As part of preventive measures, police made a number of arrests at Simferopol’s markets on April 6. The detained were brought to the Interior Ministry’s Anti-Extremism Department (the so-called “E” center) where they had their IDs checked. All of those detained had Russian passports, TRPs or temporary resident permits and residence permits.

The detained were not allowed to leave the Interior Ministry’s Anti-Extremism Department until the evening. They were also prevented from seeing their lawyers.

Relatives of Enver Bekirov Emir-Usein Cook, Vadim Siruk and Muslim Aliyev, who gathered outside the Kyiv District Court hoping to see their loved ones, only caught a glimpse of them as they were quickly convoyed into the courthouse.

People who arrived for the hearing from all over Crimea, including the elderly, pregnant women and children, had to stand in the scorching sun. The entrance to the courthouse was guarded by club-wielding police officers who prevented people from so much as taking a seat on the steps. After the hearing was over, it became known that the judges of the Kyiv District Court decided to extend the detention term of all the defendants in the ‘Hizb ut-Tahrir case’ until June 8.

Relatives of the defendants made another attempt to see them while they were being escorted into a prison truck after the hearing. However, the convoy stood so close to the gate behind the courthouse building that they could not do it. Water supply at a Simferopol prison where Enver Bakirov, Emir Usein Cook, Vadim Siruk and Muslim Aliev are held gets periodically turned off, this despite overcrowded cells. Detained by Russia’s Federal Security Service in early 2015, the defendants in the ‘Hizb ut-Tahrir case’ were charged with starting and participating in a terrorist organization under Article 205.5 of the Russian Criminal Code (membership in an organization found to be a terrorist one under the laws of the Russian Federation).

A wave of searches of Crimean Tatars’ homes meant to discredit them as ‘terrorists’ began in Crimea on February 11. Police acted very aggressively smashing windows and forcibly taking away people. Enver Bekirov, Emir Usein Cook, Vadim Siruk and Muslim Aliev are all socially active citizens. Before being arrested, Emir Usein Cook was a human rights activist, who recorded human rights violations in Crimea.

A hearing in the so called ‘February 26 case’ was held in Simferopol on April 7. Crimea’s Supreme Court heard an appeal filed by the defense attorneys against Judge Galina Redko’s illegitimate decision of May 2 whereby the detention term of Akhtem Chiygoz, Ali Asanov and Mustafa Degermendzhi was to be extended until April 11, 2016

Presiding Judge A.V. Kozyrev issued several warnings and threatened to have Akhtem Chiygoz and his attorney removed from the courtroom. Chiygoz’s attorney Nikolai Polozov cited illegal decisions made by Judge Galina Redko. According to the law on the status of judges in the Russian Federation, a judge cannot be a citizen of another state, whereas according to the available information, Judge Galina Redko was not stripped of her Ukrainian citizenship as per proper procedure. She might have burned her Ukrainian passport, but that does not mean she was stripped of her citizenship, as there is a special procedure for that in Ukraine which she failed to comply with.

This time, the judges dismissed an appeal filed by the defense attorneys, leaving unchanged a decision whereby the defendants’ detention term was to be extended until April 11, 2016.

Another hearing for an appeal filed against Judge Galina Redko’s decision in the ‘February 26’ case was held on April 6. The judges were very rude, denying everyone the right to speak. Since Akhtem Chiygoz, Ali Asanov and Mustafa Degermendzhi were not brought to the courtroom, the hearing was held by videoconference. Apart form the judges and prosecution attorneys, only defense attorneys were allowed into the courtroom.

5. April 8, 2016: Hearing in a lawsuit to ban the Mejlis rescheduled to another day

The so-called ‘Supreme Court of the Republic of Crimea’ held another hearing for a lawsuit seeking to recognize the Mejlis of the Crimean Tatar people an extremist organization and ban its operation in the Russian Federation, which was filed by Crimea’s Prosecutor’s  Office.

Crimea’s Prosecutor’s Office furnished some new evidence proving Refat Chubarov’s guilt, following which the defense attorneys requested some more time to familiarize themselves with the evidence. The judges adjourned the hearing until April 15. The next hearing for a lawsuit seeking to recognize the Mejlis of the Crimean Tatar people an extremist organization and ban its operation in the Russian Federation, which was filed by Crimea’s Prosecutor’s Office, was held on April 7.

Before the hearing began, police sealed off the area, stationing trucks full of OMON, police and FSS officers. Metal fencing and turnstiles were installed in front of the courthouse’s main entrance. There were also fire trucks near the courthouse because a bomb was allegedly planted in the building. The prosecution repeatedly referred to the Crimea embargo, blowing up of power lines and Lenur Islyamov’s activities, against whom criminal proceedings were initiated. Also, the judge asked the lawyer why Crimean Tatars consider themselves an indigenous people and whether they consider Mustafa Jemilev their leader.

The Prosecutor’s Office insisted that the term ‘the Mejlis of the Crimean Tatar People’ should include all regional and local Mejlis branches as well. On February 15, 2016, the occupation authorities filed a lawsuit with Crimea’s Supreme Court seeking to recognize the Mejlis of the Crimean Tatar People an extremist organization. The banning of the Mejlis will not only be a blatant disregard for international law, but also make possible criminal prosecution of thousands of indigenous peoples of Crimea.