Kyiv, April 11, 2016. Most turbulent situation in the ATO zone over the last day was observed between Horlivka and Yasynuvta as well as near Avdiivka. Hostile mortar attacks also took place on the Svitlodarsk salient, in Zaitseve and Mayorsk. Militant snipers were firing upon Ukrainian frontline positions in several places of the ATO zone. In the Donetsk sector Russia-backed militants fired a total of 41 times upon the positions of ATO forces. “In the Luhansk sector militants made a series of attacks near Stanytsia Luhanska before sunrise. The checkpoint located in this area came under fire, thus its work has been suspended,” said Colonel Andriy Lysenko, spokesman of Presidential Administration on ATO-related issues at a press briefing at Ukraine Crisis Media Center. 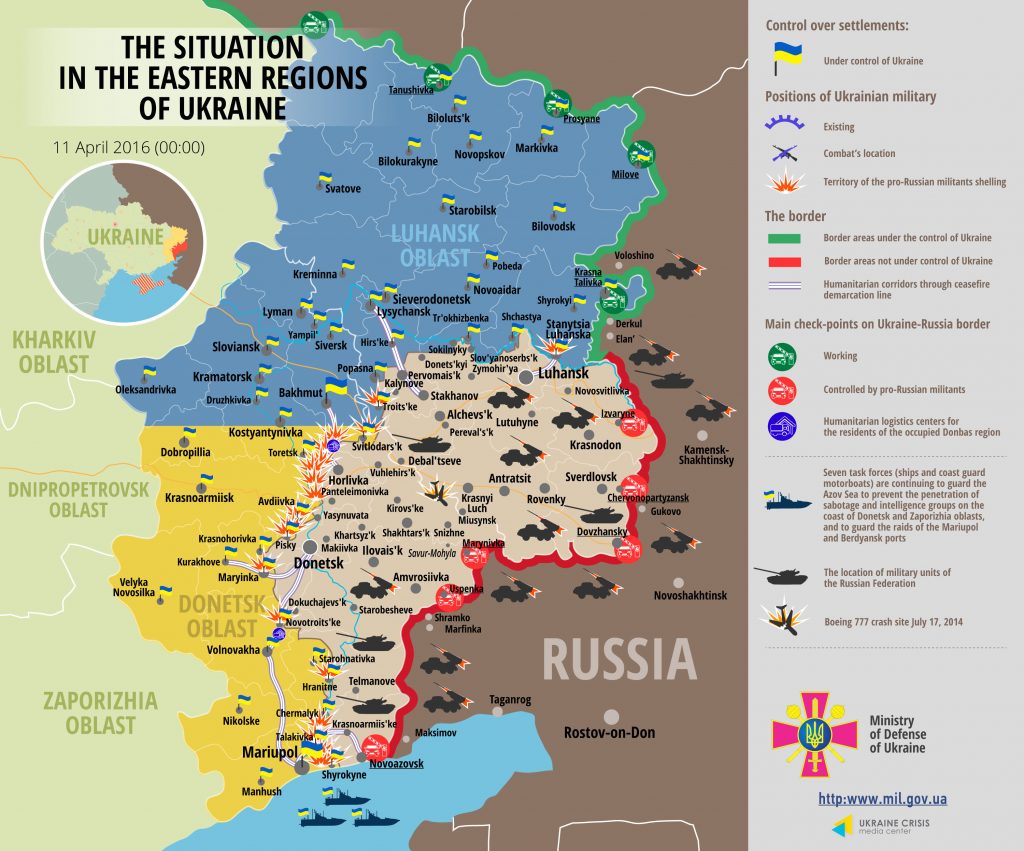 In the Mariupol sector militants used 122-mm tube artillery. “Militant groups fired over 30 shells upon Ukrainian positions from the occupied Sakhanka,” noted the ATO spokesman. He also noted that militant snipers were firing near Maryinka, militant groups were also using mortars and infantry fighting vehicles. “A total of 18 attacks were made in the Mariupol sector over the last day, each third was made with the use of heavy weapons, in each third case snipers were firing,” elaborated Colonel Lysenko.

“Ukrainian troops incurred no fatalities over the last day, two servicemen were wounded in action,” said the ATO spokesman. Main Intelligence Directorate of Ukraine’s Defense Ministry reported about militant losses. Bodies of 14 fighters killed in action as well as 19 militants wounded in action were brought to two Donetsk hospitals. The fighters served in the so-called “1st, 3rd and 100th motor-rifle brigades of the 1st “DPR” army corps.”

In Pryshyb village of Sloviansk district (Donetsk region) the owner of a countryside house discovered a cache with ammunition and explosives in the courtyard that was planted while he was away, he called the police. “An antitank grenade launcher, three fragmentation grenades, two TNT blocks with detonators and over 240 ammunition rounds were placed by a tree. Policemen are currently investigating the origin of the cache,” noted the ATO spokesman. A resident of Krasnoarmiysk voluntarily gave up to law enforcement 3.5 thousand ammunition rounds to the Kalashnikov automatic rifle. “The man found these dangerous items with a metal detector while he was collecting metal scrap,” explained Colonel Lysenko. He also reported that sappers of the State Emergency Service neutralized 105 explosive items yesterday. The items in question were earlier discovered by residents of Sloviansk and Yasynuvata districts of Donetsk region and include mortar mines and hand grenades.