Kyiv, April 18, 2016. A number of militants’ shelling in the Mariupol sector decreased drastically in the past 24 hours, namely near Mariinka, Shyrokyne, in the vicinity of Dokuchaevsk – next to Ukrainian strongholds and a checkpoint on the Donetsk-Mariupol road. “The adversary used mortar launchers twice yesterday and cannon artillery – 122-mm “Gvozdika” self-propelled artillery mount – once. In total, at least 20 shells and 20 bombs were launched at Ukrainian positions. 29 hostile attacks took place in the Mariupol sector in the past 24 hours,” informed Colonel Andriy Lysenko, spokesman of Presidential Administration on ATO-related issues at a press briefing at Ukraine Crisis Media Center. 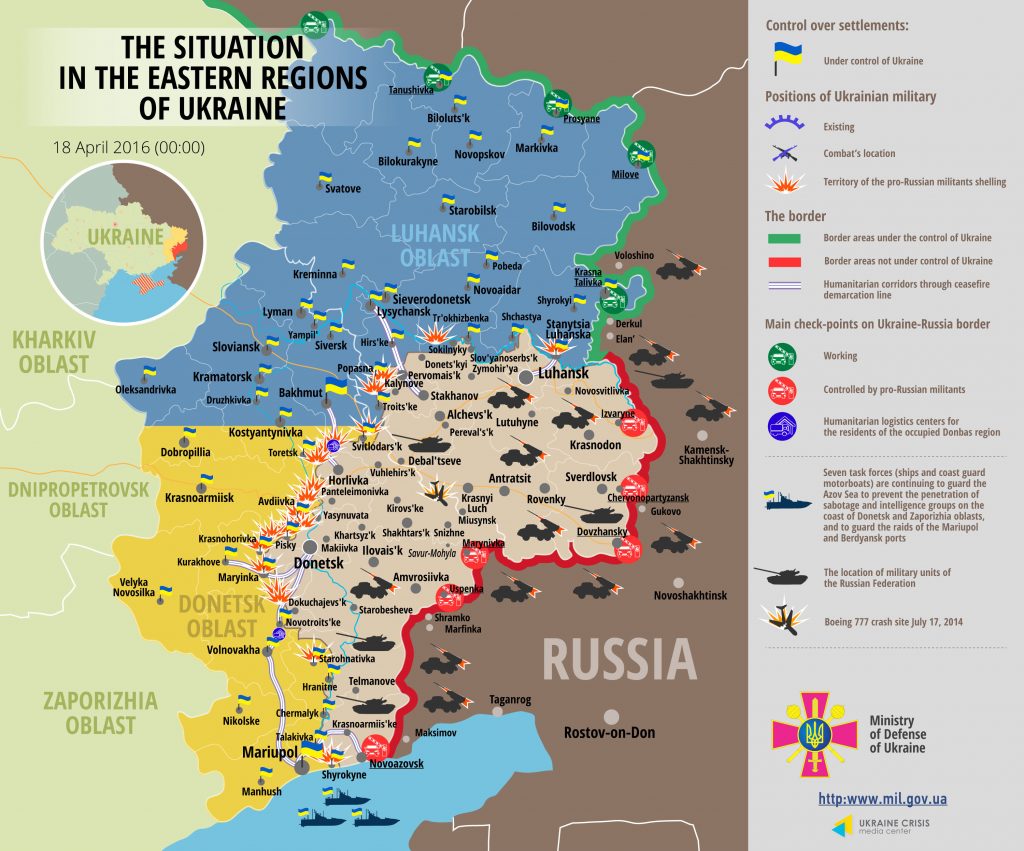 In the Luhansk sector militants violated the ceasefire along the entire contact line from Stanytsia Luhanska to Popasna, mostly at nighttime. In total, militant groups shot at ATO troops’ positions five times, using mortar launcher once. 45 attacks took place in the Donetsk sector yesterday, one in three involved use of heavy armor. “Traditionally, the hostilities were the most intense at the Svitlodarsk bulge, north outskirts of Horlivka, Avdiivka industrial area and the Donetsk airport,” informed the spokesman.

Ukrainian Armed Forces incurred no losses in combat yesterday; one serviceman was wounded by shelling in Pisky.

“Another serviceman died in Stanytsia Luhanska yesterday. He tripped a landmine, driving in a vehicle. An officer of the State Border Guard was wounded today after midnight,” said Col. Lysenko.

Col. Lysenko informed that Ukrainian troops brought down a militants’ unmanned aerial vehicle (UAV) near Novoselivka village in Donetsk region. “The downed ZALA 421-04M UAV made in Russia is intended for conducting reconnaissance in adverse weather conditions and for dropping small loads. It must be said that attacks at Ukrainian troops’ positions in the area always increased after flights of hostile UAVs,” said the spokesman. He added that the Security Service of Ukraine is studying information from the UAV at present.