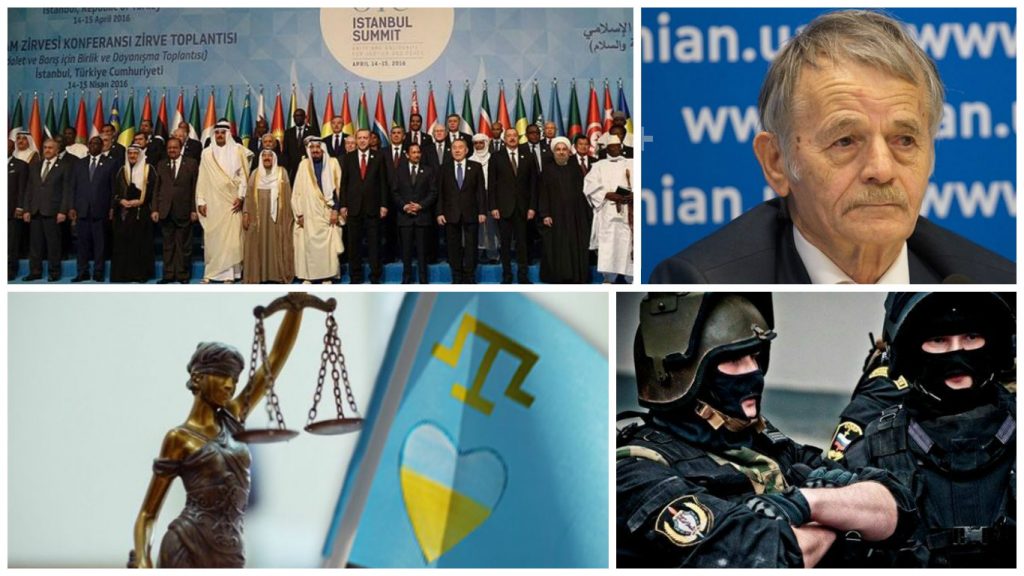 Crimea’s fate will be decided solely by the Crimean Tatars

– The Executive Board of the World Congress of Crimean Tatars, which met in Vilnius, the capital of Lithuania, on 11-13 April 2016, for its 4th meeting, released a declaration.

– It was decided at a conference called ‘Massive human rights abuses in occupied Crimea’ that Crimea’s fate will be decided solely by the Crimean Tatars. Any decision made against the will of the Crimean Tatars shall be deemed unjust.

– The World Congress of Crimean Tatars adopted the following list of demands:

– The World Congress of the Crimean Tatar people (WCCT) is an organization bringing together Crimean Tatars living in their historic homeland of Crimea, as well as in Turkey, Romania, Poland, USA, Canada, Lithuania, Western Europe and Central Asia.

– Held in Simferopol /Aqmescit on May 9, 2009, the first meeting of the World Congress of the Crimean Tatars was attended by 420 delegates from 13 countries. At that meeting, Refat Chubarov was elected the organization’s Chairman.

– Held in Turkey’s Istanbul on April 14, 2016, the 13th Summit of the Organization of Islamic Cooperation, called ‘Unity and Solidarity for Justice and Peace’, was attended by representatives of 56 member countries, including a Ukrainian delegation comprised of Mustafa Jemilev, Advisor to Ukrainian President on Crimean Tatar Affairs, Refat Chubarov, Mejlis Chairman, and Rustem Umerov, a Qurultai delegate.

– Russia, whose delegation also attended the summit, was present in an observer capacity.

– In his turn, Turkish Prime Minister Ahmet Davutoglu urged representatives of the Islamic world to take a unified stance against Russia’s occupation of Crimea, as well condemn certain countries’ policy of redrawing borders.

– Hearing in a lawsuit seeking to ban the Mejlis rescheduled again

– Mejlis lawyers filed a motion seeking to summon to court as witnesses Remzi Ilyasov, Zaur Smirnov, Eskender Belyalov, Sadykh Tabakh, Mufti Emirali Ablayev, as well as Zair Smedlyayev and Ilmi Umerov. However, the judges overruled the motion saying that most of the above individuals would provide no more information than is already available in the motion.

– A hearing in a lawsuit seeking to ban the Mejlis of Crimean Tatars was rescheduled for April 25.

– The judges cited the failure of Nariman Jelyal, Mejlis Deputy Chairman and the main defendant, to show up for the hearing as a reason for its rescheduling.

– On April 13, 2016, Natalya Poklonskaya, the so-called Crimea’s Prosecutor General, issued an order whereby the Mejlis’s activities in Crimea were suspended. Poklonskaya cited Articles 9 and 10 of Russia’s Federal Law ‘On countering extremist activities’ as a legal reason for the order. The order was forwarded to Russia’s Justice Ministry so the Mejlis was put on the list of public and religious entities whose activities are suspended in Russia and Crimea.

– The decision will be valid until ‘Crimea’s Supreme Court’ has delivered a verdict in a lawsuit seeking to ban the Mejlis filed by Poklonskaya.

Hearings in cases of Mejlis members held in Russia and Crimea

– On April 14, Moscow’s Meshchansky Court held a hearing in a complaint filed by Mustafa Jemilev, National Leader of the Crimean Tatars, against Russia’s Federal Security Service’s decision to ban him from entering occupied Crimea.

– Under the pretext of constituting a state secret, Mustafa Jemilev case was forwarded to Moscow’s State Court.

–  On April 15, an investigator with the Main Investigative Department of Russia’s Investigation Committee issued an indictment order against Akhtem Chiygoza as per Article 212 of Russia’s Criminal Code (organizing mass riots, including violent behavior and property damage).

– Akhtem Chiygoz refused to testify as a defendant, because he provided all the necessary information in the course of the preliminary investigation and had nothing more to add to it.

– Next week, the investigators will file a motion to the court seeking to extend Akhtem Chiygoz’s detention term.

– Of the six  men tried in the so-called February 26 case, three – Ahtem Chiygoz, Mustafa Degermendzhi and Ali Asanov – are being held in a jail in Simferopol, while the other three – Eskender Cantemirov, Arsen Yunusov and Eskender Emirvaliyev – were released on bail and are now awaiting their sentences at home. All of them were charged with involvement in mass riots which took place during a February26, 2014 rally outside the Crimean Parliament.

– Under the pretext of conducting a census, police searched homes of Crimean Tatars living in the village of Arpat (Zelenogorye) in the Alushta region.

– Police officers asked the Crimean Tatars how many people live in their houses, where they do their shopping, where their children study and whether there are any drug dealers in the village. They also searched their vegetable gardens and greenhouses.

– In the village of Kapsihore (Morskoye) of the Sudak district, police detained several Crimean Tatars for having no Russian passports on them. The detained were taken to the police station, where they had their fingerprints taken. It was not until after their relatives brought documents proving their identity that the men were released.