Kyiv, April 23, 2016. The number of attacks at Ukrainian positions decreased in the ATO area yesterday. The armistice held in certain areas – Stanytsia Luhanska district, Pervomaisk agglomerate, Svitlodarsk bulge and the Donetsk airport. Militants violated the ceasefire four times in the Luhansk sector. Mortar shelling was registered in Shchastia, said spokesman of Presidential Administration on ATO-related issues Colonel Andriy Lysenko at a press briefing at Ukraine Crisis Media Center. “Five hostile attacks took place in the Donetsk sector, all but one involving use of mortar launchers. Militants launched over 70 mortar shells at Ukrainian positions. The enemy violated the ceasefire in Zaitseve and Avdiivka,” added the spokesman. 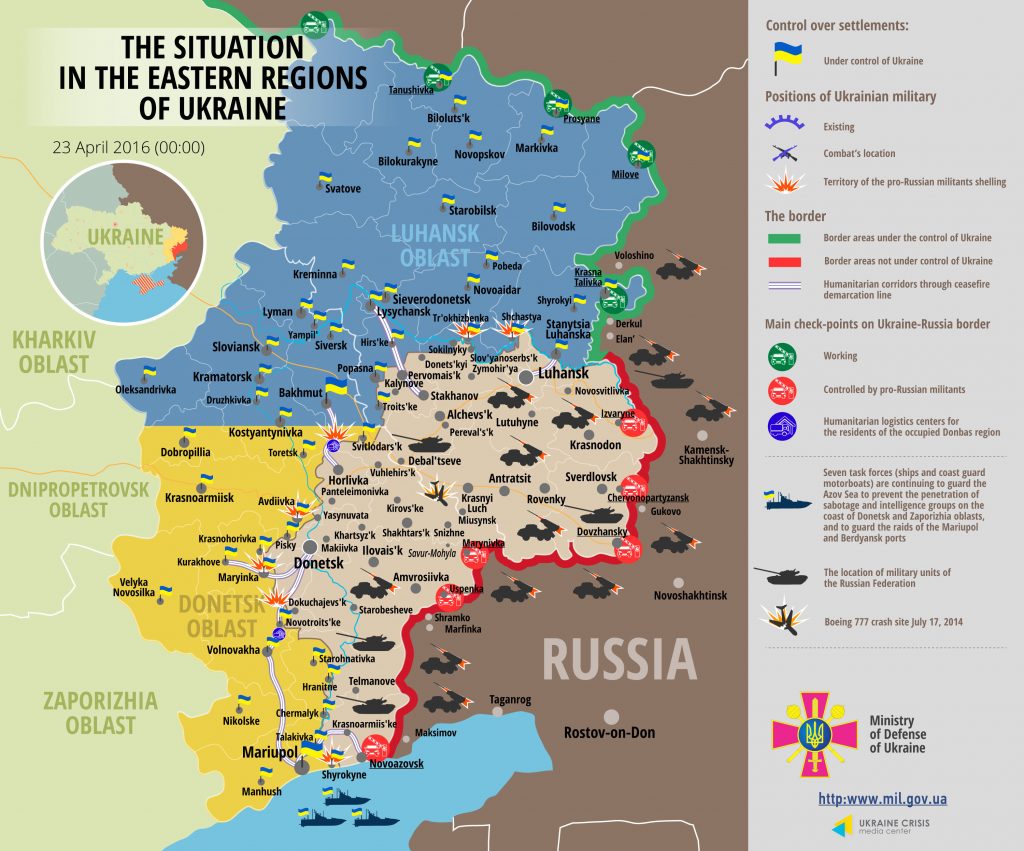 According to the spokesman, in the Mariupol sector militants were the most active in Berezove and Shyrokyne. In total, 10 militants’ attacks took place. Col. Lysenko informed that Ukrainian Armed Forces incurred no losses in combat yesterday, but two servicemen were wounded. It took place in the Donetsk sector, near Zaitseve and Avdiivka.
Col. Lysenko said that law enforcements detained a militant who was looting in Mariupol in spring 2014. “After liberation of the town the criminal was hiding at rented apartment, waiting for new orders from his ‘curators’. Officers of the Security Service of Ukraine ceased two Makarov guns with cartridges from him during search,” said the spokesman. He added that border guards of Kramatorsk subdivision found a weapons cache in Nelipivka village of Torets town council. The cache contained cartridges of various calibers, missiles to under barrel grenade launchers, hand grenades and RPG-22 grenade launcher (rocket propelled grenade).
According to Col. Lysenko, repair works resumed in the ATO zone at Mariinka-Krasnohorivka gas pipeline. Two unexploded grenades were found during examination of the area. The spokesman reminded it was the third attempt of repairs in 2016. The first two attempts failed due to attacks conducted by militants.