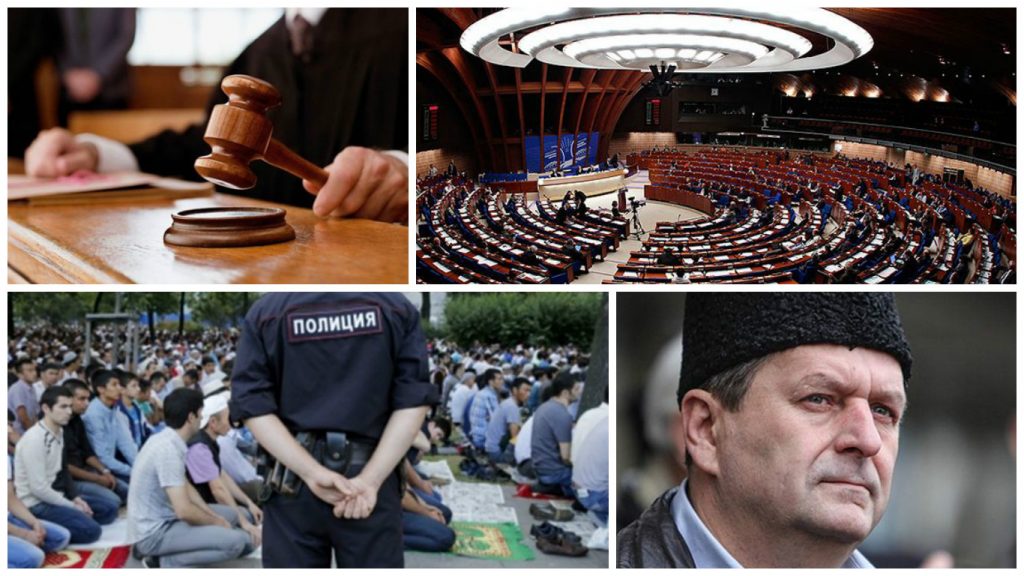 – Under a warrant issued by Simferopol’s Kiev District Court, Refat Jeparov and Arsen Alimov, two Crimean Tatars charged with membership in Hizb ut-Tahrir, an organization banned in the Russian Federation, have been placed under a 2-month arrest.

– Simferopol’s Kiev District Court ruled that Refat Jeparov and Arsen Alimov be held in detention for two months until June 18, 2016. The prosecution explained the arrest by the fact that investigation is currently underway.

– It was reported earlier that after an April 18 raid in the village of Krasnokamenka, police arrested two local residents on charges of membership in Hizb ut-Tahrir, an organization banned in the Russian Federation.

– On the morning of April 20, Russian police raided a home of Crimean journalist Zair Akadyrov, despite his not being in at the time. Zair Akadyrov’s parents watched balaclava-wearing and machine gun-wielding men doing a thorough search of the house, looking for some documents.

– Following the search, Russia’s FSS (Federal Security Service) branch in Crimea summoned the journalist for questioning. However, Zair Akadyrov said he would only show up for questioning after consulting his lawyer.

– Acting on a search warrant issued by Crimea’s Prosecutor General, police raided the home of journalist Nikolay Semeny, a native of Crimea and journalist with Radio Freedom’s Crimean Realities website. Citing Article 280.1 of the Russian Criminal Code, Crimea’s Prosecutor General Natalia Poklonskaya initiated criminal proceedings against the journalist on the trumped-up charges of encroachment on Russia’s territorial integrity and extremism.

– As a pre-trial measure of restraint, Nikolay Semeny was made to sign a written pledge not to leave his home town. In addition to searching Semeny’s home, Russian police also conducted searches in the houses of seven other Crimean journalists in Simferopol, Sevastopol and Yalta.

– The decision was made by the investigator because the pre-trial measure of restraint was not related to deprivation of liberty.

The prosecution made a motion to extend Akhtem Chiygoz’s detention term until May 22.

– Ever since criminal proceedings were initiated against him for his involvement in ‘February 26 riots’, Akhtem Chiygoz has not had his detention term, which is due to expire on May 5, extended. Therefore, the investigator tried to get the judges to increase Chiygoz’s detention term by a term exceeding the duration of investigation, which is unacceptable. According to the investigator, he made a motion to extend the investigation term and sent it to Moscow, but received no reply yet when a court hearing is to be held.

– The judge cited Chiygoz’s ‘maintaining relations with Chubarov and Jemilev, leaders of the Mejlis of the Crimean Tatar people, who, while in Ukraine, have been actively engaged in anti-Russian activities aimed at destabilizing the political situation in the Republic of Crimea’ as a major reason for extending Chiygoz’s detention term.

It was reported earlier that three of the six men charged with February 26, 2014 riots outside the Crimean Parliament – Akhtem Chiygoz, Mustafa Degermendzhi and Ali Asanov – have been held in custody at Simferopol’s pre-trial detention center #1, while another three – Eskender Cantemir, Arsen Yunusov and Eskender Emirvaliev – are awaiting their sentences at home after being released on bail.

– After a Friday prayer on April 22, 2016, police surrounded a mosque in Sevastopol, forcing everyone inside to show their IDs and mobile phones.

– Refat Chubarov, Chairman of the Mejlis of the Crimean Tatar people, disagreed with the Council of Europe’s recently released report on the human rights situation in Crimea, saying that of all religious denominations in Crimea Russian police have only been searching Muslims’ homes. According to him, the banning of the Mejlis ‘is the best proof of the Russian authorities waging a war of extermination against the Crimean Tatar people’.

5. PACE in favor of sanctions against individuals responsible for repression in Crimea
April 22, 2016

– The Parliamentary Assembly of the Council of Europe adopted a resolution urging to introduce targeted sanctions against individuals responsible for political persecution in Russian-occupied Crimea.

– Sanctions against individuals responsible for criminal persecution of Nadezhda Savchenko and Akhtem Chiygoza, violations of Crimean Tatars and Ukrainians’ rights, as well as political persecution of the Mejlis of the Crimean Tatar people, will be introduced by the PACE’s 46 member countries

– The PACE condemned the Russian authorities’ recent decision to ban the Mejlis of the Crimean Tatar people as an allegedly extremist organization. According to the PACE, the decision runs counter to international standards and demonstrates a systematic violation of the rights of Crimean Tatars.