Militants shell cities in both Donetsk and Luhansk regions, damaging infrastructure objects. Military intelligence registers new weapons on the enemy’s side. Ukrainian side provided update on casualties over past two days.

Kyiv, April 25, 2016. Militants violated the armistice in the Donetsk sector after midnight, opening fire from “Msta-B” howitzers,” informed spokesman of Presidential Administration on ATO-related issues Colonel Andriy Lysenko at a press briefing at Ukraine Crisis Media Center. “They launched about 50 artillery projectiles, shooting from the distance of 20 km,” he said. An orthodox church was damaged by shelling in Pravdivka village, Kostiantynivka district in Donetsk region. According to the Chief Intelligence Directorate of the Ministry of Defense of Ukraine, the militants were adjusting artillery fire using the newest Russian signals intelligence system ‘Zoopark-1’. 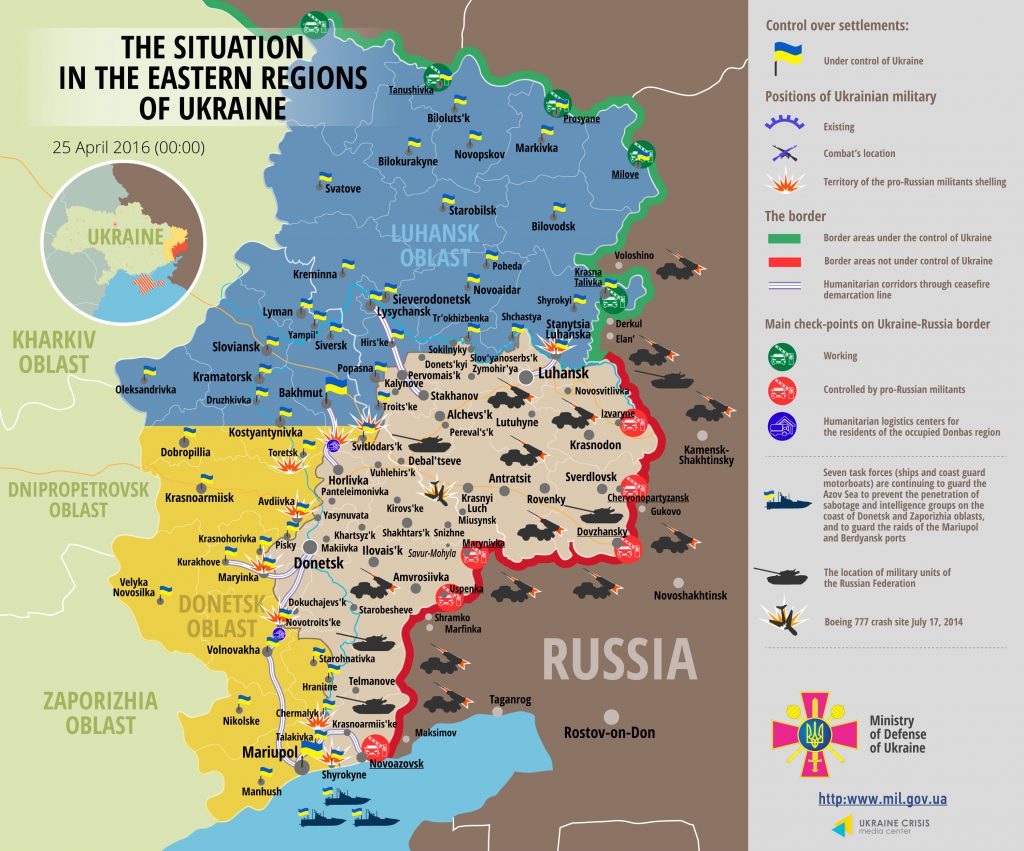 Militants made a number of attacks using mortar launchers near Avdiivka and Zaitseve. Moreover, they used an armored personnel carrier near Luhanske. In total, nine militants’ attacks took place in the Donetsk sector yesterday.

In the Luhansk sector, Russia-backed militant groups violated the ceasefire in Stanytsia Luhanska three times in the evening. “The closed checkpoint came under occupants’ fire again,” said the spokesman. Militants shelled Ukrainian positions and inhabited localities along the entire contact line in the Mariupol sector yesterday. “The biggest number of attacks took place in Mariinka and Shyrokyne. As a result of occupants’ criminal activity, Mariinka and the neighboring villages are experiencing difficulties with electricity supply. Moreover, gas pipeline repair has been suspended,” said Col. Lysenko. It total, 17 attacks took place in the Mariupol sector yesterday.

Ukrainian Armed Forces incurred no loss in combat, three troops were wounded. “It happened in the Donetsk sector. One serviceman was injured as a result of attack of an unmanned aerial vehicle (UAV) which dropped flammable substance. The incident took place at home front in Kostiantynivka. Two troops were wounded as a result of hostile mortar attacks near Avdiivka,” elaborated Col. Lysenko. There was an update on losses incurred by Ukrainian Armed Forces in the past days. “Another Ukrainian serviceman died the day before yesterday, on April 23. He was heavily injured at the frontline, near Luhanske, and died in Bakhmut in several hours,” said the spokesman.