Ukraine suffers casualties, a militant held captive. Military intelligence reports new weapons incoming from Russian side to support militants, number of attacks is slightly lower than the day before.

Kyiv, April 26, 2016. The situation was the most restless in the Mariupol sector in the ATO zone yesterday. Militants shot 29 times in the past 24 hours, using mortar launcher. In total, 30 mortar shells were launched at ATO troops’ positions. “Armed hostilities continued over 10 hours in advance in Mariinka. ATO troops repeatedly responded with fire,” said Colonel Oleksandr Motuzyanyk, Presidential Administration spokesperson on ATO related issues, at a press briefing at Ukraine Crisis Media Center. 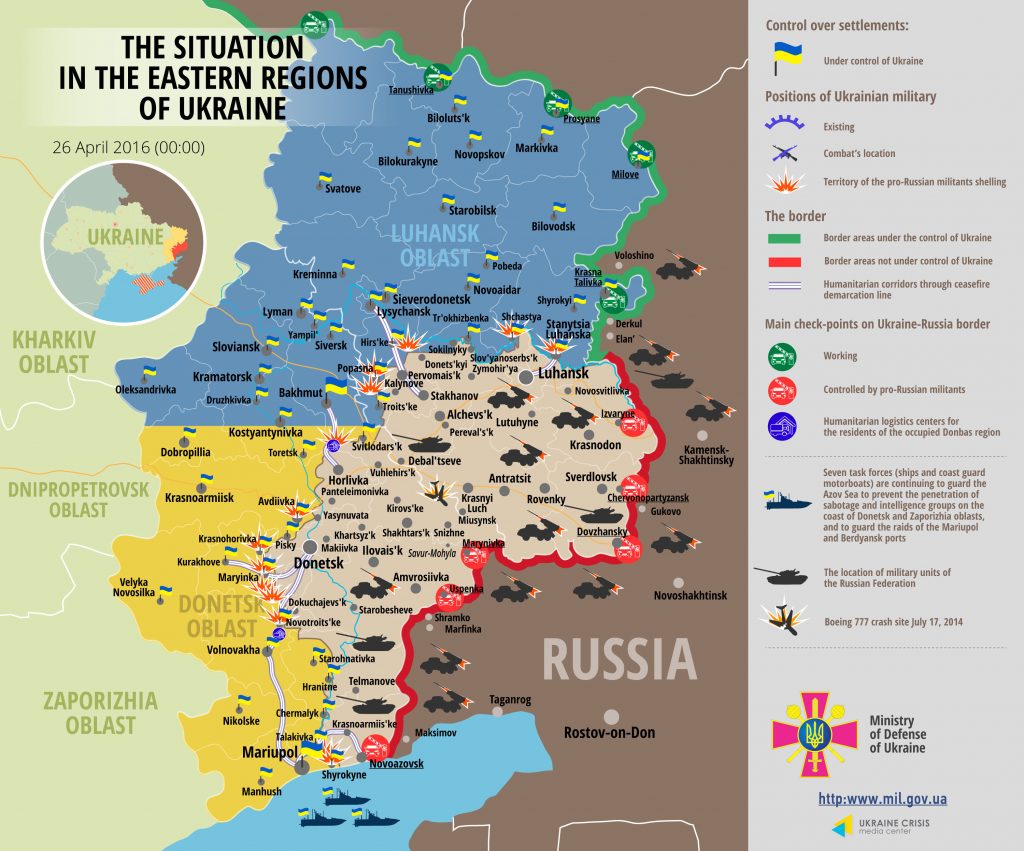 Militants conducted seven attacks in the Luhansk sector – in Stanytsia Luhanska, Shchastia, at the Bakhmutivska road and in Popasna district; one shelling involved use of mortar launcher. Russia-backed militant groups violated the armistice in Zaitseve and Avdiivka in the Donetsk sector, conducting six attacks, one of them from a mortar launcher. “Ukrainian troops took a militant captive yesterday in Zaitseve. The detained was passed to the officers of the Security Service of Ukraine,” said Col. Motuzyanyk.

One Ukrainian serviceman died in combat yesterday and five were wounded. According to the available information, militants incurred losses of one militant dead and two wounded, from so-called “9th separate assault battalion of motorized rifle marine regiment” and “3rd separate special troops battalion of the 1st army corps of Luhansk People’s Republic”.

According to the Chief Intelligence Directorate of the Ministry of Defense of Ukraine (CID MDU), militants receive another batch of reinforcement from Russia. “Five fuel tanks with combustible and lubrication material arrived at Rovenky railway station and echelon carrying 70 units of armor came to Luhansk,” said Col. Motuzyanyk. Moreover, according to the received intelligence, there is a subdivision of the 24th separate special operations brigade of the Armed Forces of the Russian Federation from Novosibirsk, and almost a squadron from the 45th separate special operations brigade of Air Assault Forces (from Kubinka, Moscow oblast). Moreover, modern radio control mobile systems “Svet-KU” included into inventory of the Russian army in 2012 were located in Pervomaisk area.

Law enforcement officers detained a militants’ informant in Mariinka district in Donetsk region. The detained was providing militants with information of proceeding of military equipment and Ukrainian subdivisions.

An anti-tank guided missile was found with a local inhabitant of Torets. “According to the man, he found the weapon in the woods area near the combat area and decided to keep it,” said the spokesman. A mobile team of Mariupol police found six more artillery shells near Pryazovske village in Pershotravnevyi district.

Col. Motuzyanyk also informed that humanitarian aid collected by students, ATO veterans and representatives of religious organizations was sent from Rivne region for the inhabitants of the temporarily occupied territories.