Kyiv, May 4, 2016. The situation in the ATO zone remains relatively calm. Nevertheless, sporadic armed provocations continued. Militants violated ceasefire six times in the past 24 hours. The armistice fully held in the Luhansk sector, as not a single attack took place there yesterday. Militants shelled ATO troops’ positions four times in the Donetsk sector. “The situation remains restless near Avdiivka, where Russia-backed militants were shooting from armored personnel carriers, small arms and grenade launchers. Militants used small arms and grenade launchers near Zaitseve. Moreover, the enemy shot from large machine guns near Luhanske at the Svitlodarsk bulge, but met rebuff from Ukrainian troops,” informed the spokesman of the Presidential Administration on ATO related issues Colonel Andriy Lysenko at a press briefing at Ukraine Crisis Media Center. 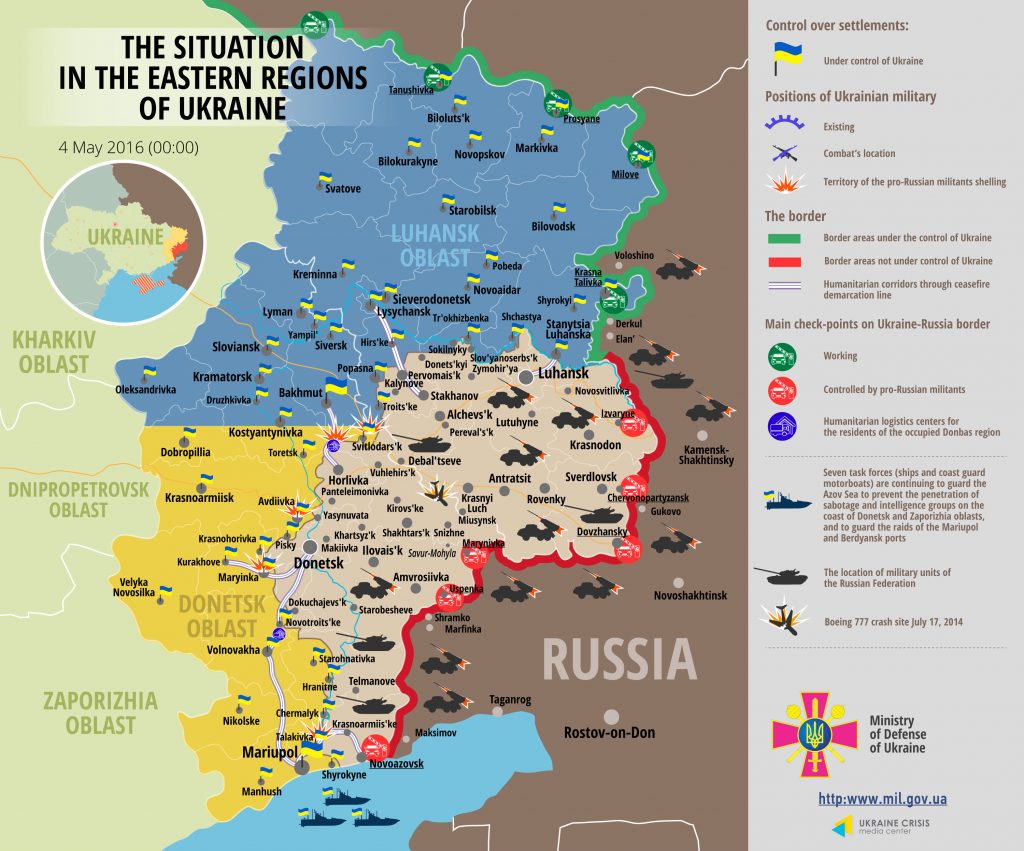 According to Col. Lysenko, militants instigated two armed provocations in the Mariupol sector, near Mariinka and Hnutove village. Small arms and grenade launchers were used there. The spokesman informed that no Ukrainian servicemen died in the past 24 hours and one was wounded as a result of a shelling near Mariinka.

According to the Chief Intelligence Directorate of the Ministry of Defense of Ukraine, one militant of self-proclaimed “Luhansk people’s republic” (“LPR”) was injured as a result of careless handling of weapons. Another militant died while driving combat equipment in Stakhanov. “Two other militants from a so-called “100th separate motorized rifle brigade of self-proclaimed “Donetsk People’s Republic” (“DPR”) were wounded as a result of infighting,” said Col. Lysenko. According to him, there are more and more facts of this kind observed by Ukrainian intelligence. For instance, three militants from Debaltseve deserted frontline positions, 17 militants from Novoazovsk declared their intention to leave the Russia-backed militant groups, and 50 militants from Makiivka, Donetsk and Horlivka willfully set out towards Ukrainian-Russian border.

“Moreover, military intelligence identified the circumstances of provocative shelling near Shyroka Balka – Horlivka water reserve on May 2,” said Col. Lysenko. According to him, personal details of militants who violated the armistice have been identified. They are members of so-called “reconnaissance squadron of the 3rd separate motorized rifle brigade” located in Horlivka. “It is so-called “deputy commander of the 1st reconnaissance platoon” Yevgen Borozdych and reconnaissance engineers Ruslan Kozlovskyi and Roman Yegupov. Moreover, intelligence found that a subdivision is under command of a militant Sergey Popkov. Militants committed the armed provocation in a state of alcoholic intoxication,” said the spokesman.

According to Col. Lysenko, Russia supplies equipment to Donetsk under the pretense of participation in so-called “May 9 Parade”, including howitzers, “Rapira” cannons, large mortar launchers, anti-aircraft mounts, T72 tanks and anti-aircraft guided missile systems. “It is blatant violation of the Minsk agreements, and international observers were informed in due course,” emphasized Col. Lysenko.