Kyiv, May 7, 2016. Ukrainian special services jointly with police revealed an attempt to illegally transport a batch of explosives in the ATO zone near Starohnativka in Donetsk region. “Law enforcements found six TNT blocks, 126 primer fuses and an anti-personnel mine MON-50 while searching a vehicle going to Hranitne. The driver admitted that the freight was bound for Volnovakha and then transported to peaceful regions of Ukraine,” informed the spokesman of the Presidential Administration on ATO related issues Colonel Andriy Lysenko at a press briefing at Ukraine Crisis Media Center. 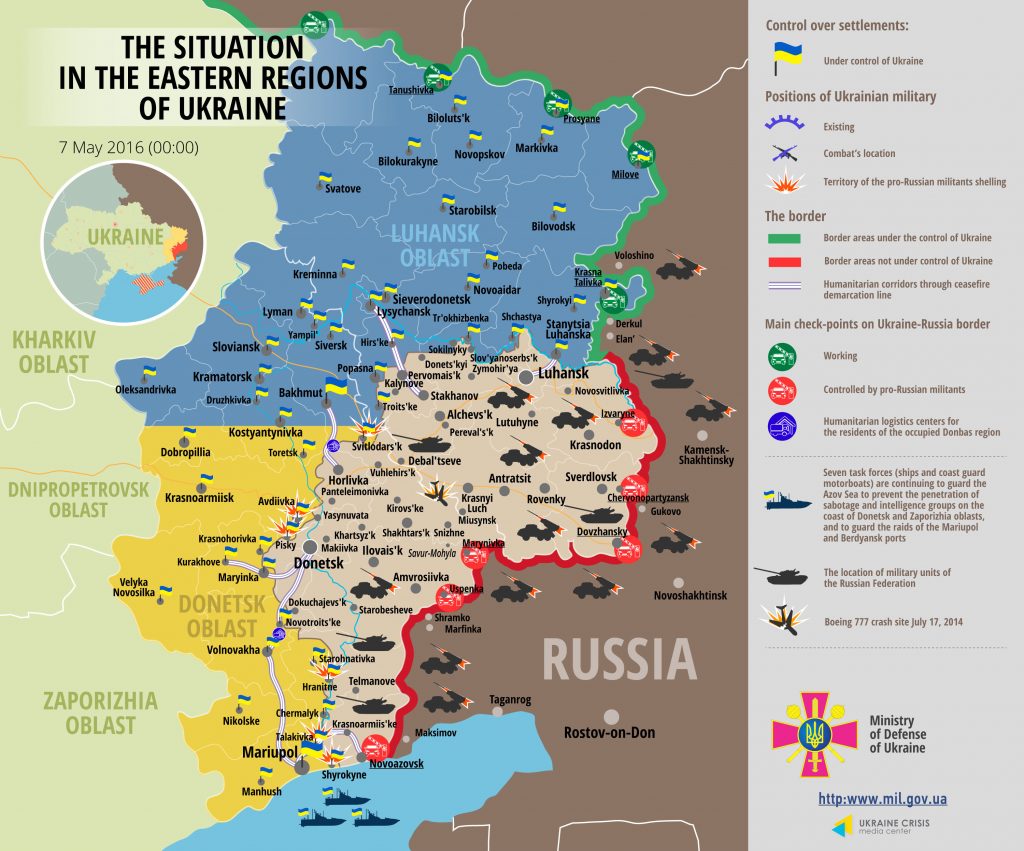 The Security Service of Ukraine (SBU) found a weapons cache in Shchastia of Luhansk region containing ‘Igla’ air defense missile system, RPG-26 grenade launcher, TNT and three boxes of 7.62 cartridges. The SBU revealed illegal activity of a businessman in Luhansk region who was financing militants of self-proclaimed “Luhansk People’s Republic” (LPR). “The man registered companies on the temporarily uncontrolled territory in Luhansk region and was selling gas, methane and foodstuffs there, paying “taxes” to the “LPR budget”. The suspect has been detained, investigation continues,” explained the spokesman.

No militants’ provocations were registered in the Luhansk sector. Combat activity of low intensity continues in the Donetsk sector. “Enemy, like earlier, is provoking Ukrainian troops to respond with fire near Avdiivka, shelling their positions from grenade launchers and small arms. Other episodes of ceasefire violations were registered near Sviltodarsk water reservoir and Donetsk airport,” said Col. Lysenko. Militants did not use heavy armor in the Mariupol sector. Brief militants’ provocations took place in Hranitne, Hnutove and Shyrokyne. Ukrainian Armed Forces incurred no losses in combat yesterday. Three troops were wounded as a result of tripping an unidentified explosive device near Bakhchovyk settlement in Volnovakha district. “The servicemen were administered medical aid and returned to their unit,” added the spokesman.