Ukraine’s Security Service neutralized a terrorist group and prevented another terror act in Ukraine’s southern region of Kherson. Number of Russian servicemen on active duty wishing to leave Donbas for Russia is mounting.

Kyiv, May 10, 2016. Ukraine’s Security Service in Kherson region neutralized a terrorist group that organized an explosion in Novooleksiyivka, Henichesk district. As a result of the terror act one person was killed and six were wounded. “In course of investigation law enforcement staff prevented one more explosion. Almost 40 kg of plastic explosive were seized,” said Colonel Oleksandr Motuzyanyk, spokesman of Presidential Administration on ATO-related issues at a press briefing at Ukraine Crisis Media Center. Law enforcement seized two charges for the under-barrel grenade launcher from a resident of Lyman. In Sloviansk a local voluntarily gave up three TNT blocks and a detonator. 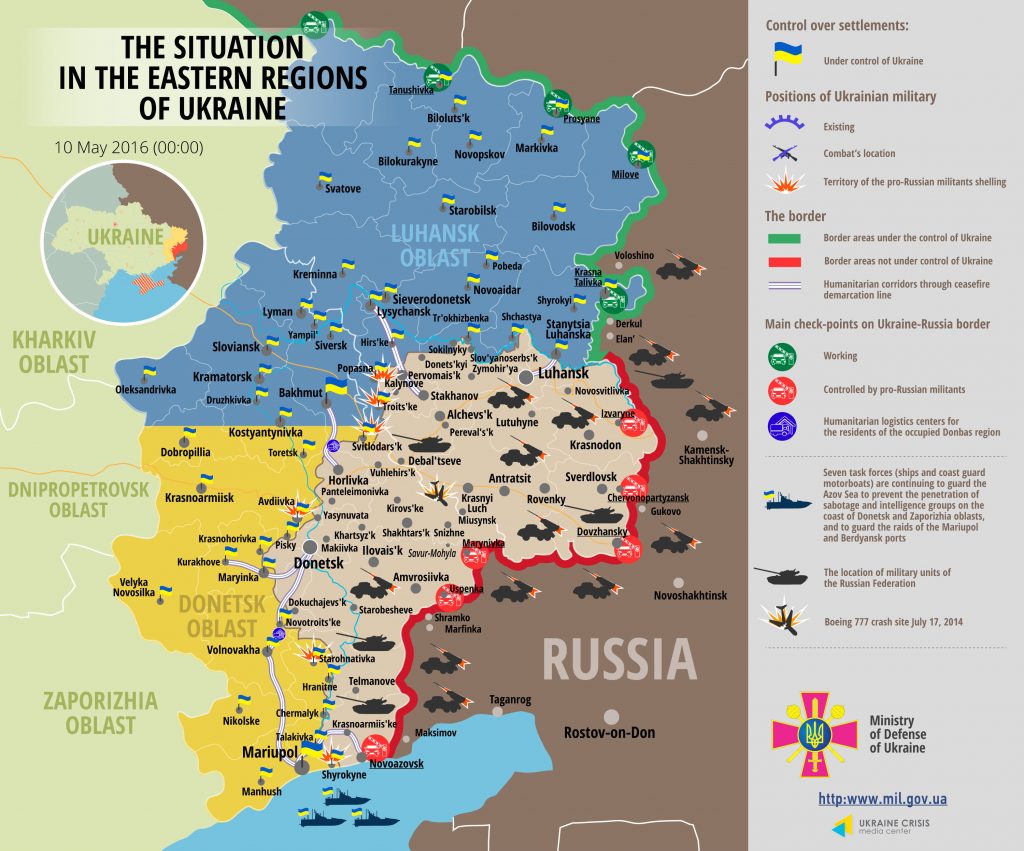 Militants violated ceasefire eight times over the last day in the Donetsk sector – at the Svitlodarsk salient and near Avdiivka. One provocation was registered in the Luhansk sector, it took place in Popasnyansky district. “In the Mariupol sector militant groups violated ceasefire six times – in Starohnativka and Shyrokyne. Occupants fired once from an infantry fighting vehicle BMP-2,” noted the ATO spokesman.

One Ukrainian serviceman was killed in action and two servicemen were wounded in action over the last day.

“It happened as a truck that was moving in the frontline area hit an antitank mine,” explained Colonel Motuzyanyk. He said militant losses over the last day include three wounded militants of the so-called “3rd motor rifle brigade”, “11th motor-rifle regiment of the 1st army corps of ‘DPR’” and of the “2nd motor-rifle brigade of the 2nd army corps of ‘LPR’.” Main Intelligence Directorate of Ukraine’s Defense Ministry reports that the number of Russian servicemen on active duty of the 1st and 2nd army corps who would like to return back to Russia is growing. “In order to hold back this flow the Russian occupational troops command threatens to fire them with no further right to social benefits and payment,” said Colonel Motuzyanyk.

Ukrainian intelligence also reports that a railway echelon from Russia arrived in Luhansk carrying 700 tons of diesel fuel for militant groups. “Militants brought heavy weapons to the streets of occupied Donetsk and Luhansk for the May 9 parade in violation of the Minsk agreements including tanks, artillery and Grad systems. OSCE monitors also registered the above equipment in the cities,” added Colonel Motuzyanyk. The intelligence reports that militants started dismantling equipment of the coal mine “Shakhta 2-bis” in Horlivka and hydraulic equipment at the factory in Irmine, they are taking it away as metal scrap.