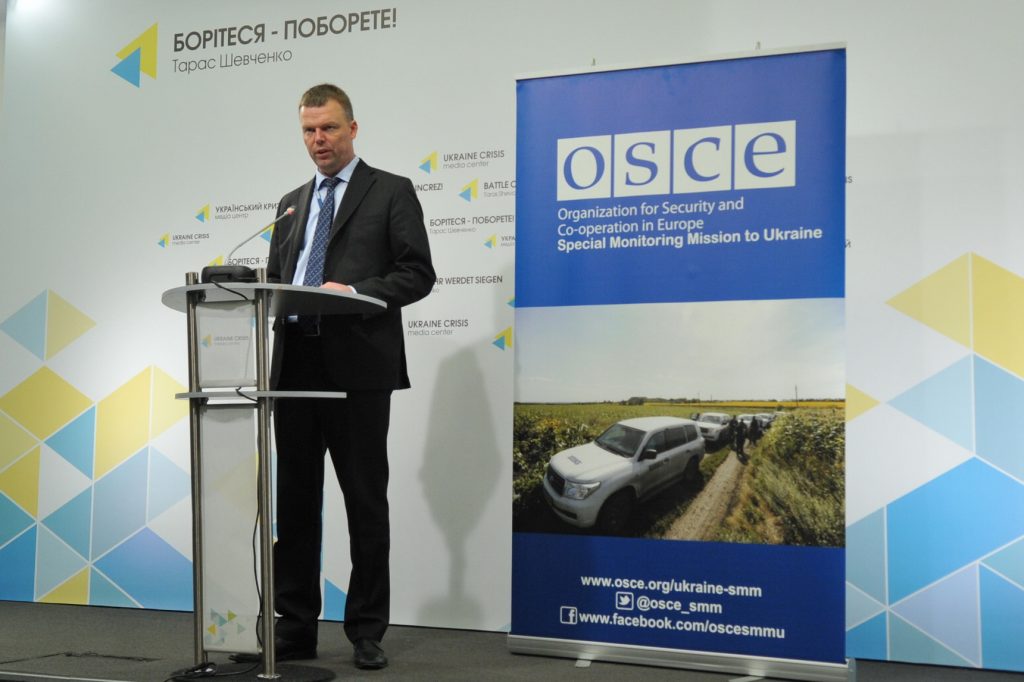 Kyiv, May 19, 2016. Situation along the contact line remains highly unpredictable. “Violence erupts unannounced in the most unexpected places and at the most unexpected times. In Yasynuvata, for example, on Sunday our monitors heard 186 explosions, of which 140 occurred within one hour, south-west and west of its position. The next day, Yasynuvata was quiet,” said Alexander Hug, First Deputy Chief Monitor of the OSCE Special Monitoring Mission (SMM) in Ukraine. On Tuesday, there was an overnight shelling incident in Dokuchaievsk, controlled by the self-proclaimed “Donetsk People’s Republic” (“DPR”). “Unpredictability is driven by the dangerous proximity of the sides in key locations along the contact line,” added Mr. Hug.

Alexander Hug expressed a particular concern that there is a serious risk to civilians crossing the contact line in Stanytsia Luhanska, Luhansk sector. “On Monday, for example, an explosion occurred just 300 m from the bridge as people crossed the river. On Tuesday night, we recorded approximately 30 explosions in the vicinity of the bridge,” said the SMM First Deputy Chief Monitor. He added that despite the obvious risk on Tuesday morning there were over 600 people waiting to leave or to enter government-controlled areas.

Mr. Hug emphasized that disengagement was one of the key ideas that emerged from the Normandy 4 meeting in Berlin last week. “According to OSCE Chairperson-in-Office Foreign Minister Steinmeier, the participants agreed on, among other things [and I quote]: “The disengagement of forces along the line of contact with a view to establishing demilitarised zones with precise coordinates and deadlines”. Its importance was underlined by Minister Steinmeier,” reminded Mr. Hug. According to him, disengagement in the areas of Stanytsia Luhanska and Zolote-Popasna is a matter of priority. “If the violence was to stop there, the crossing route in the latter could be finally opened, and people could cross in safety,” he explained. Mr. Hug also reminded of an urgent necessity to start more active demining action. “Latest UN figures suggest that over two thirds of civilian casualties in Donbas are currently caused by mines and unexploded ordnance,” he emphasized.

“For all of this to work, we need to have a functional Joint Centre for Control and Coordination (JCCC),” stressed Alexander Hug. “We need to – alongside the JCCC – to coordinate our future efforts in line with the Normandy 4 outcomes”.