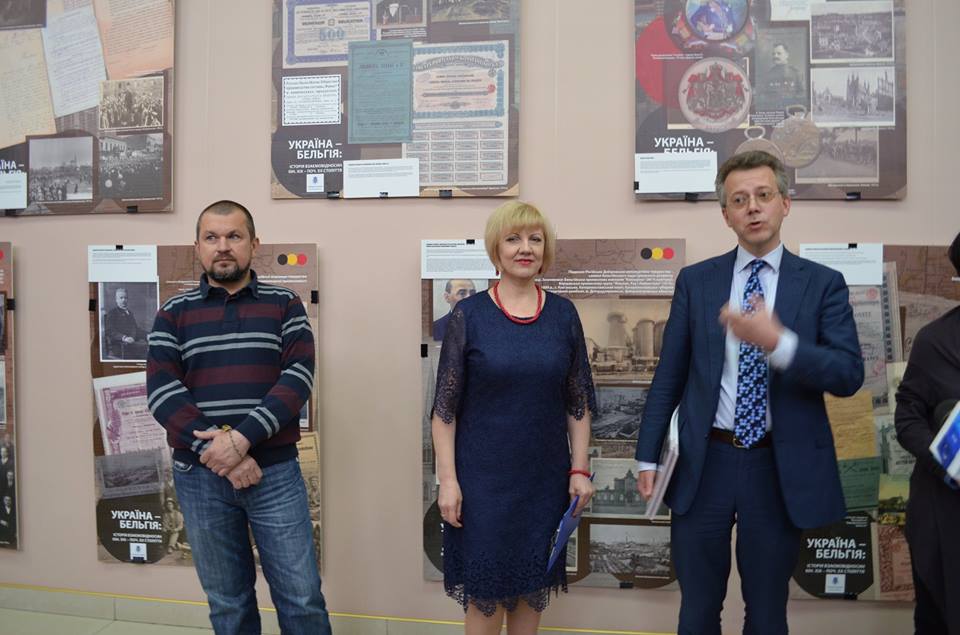 On May 16 Severodonetsk – administrative center of Luhansk region hosted opening of the exhibition narrating Belgium’s investment into Ukraine’s eastern and southern regions in late XIX – early XX century. The exhibition entitled “Foreign investment in Ukraine at the end of XIX century – beginning of XX century. Part one: Belgium” presents the country’s investment through a series of posters displaying shares and bonds of Belgian companies active in Ukraine at that time, archive documents, photos of the plants, workers and of their daily routines. Belgian investments reached the territory of Ukraine’s actual Dnipropetrovsk, Zaporizhzhia, Donetsk, Luhansk and Odesa regions. Over 80 Belgian plants were active in the area at the turn of the century.

The exhibition is based on the collection of Ukrainian patron of arts Dmytro Pirkl. Materials that he managed to collect were then passed to the Dmytro Yavornytskyi Dnipropetrovsk national historic museum. Current exhibition is organized by Ukraine Crisis Media Center (UCMC) and supported by the Embassy of Belgium in Ukraine.

Construction of Severodonetsk started in 1934, so the city did not experience the Belgian investment directly. However nearby Lysychansk is the place where Belgian entrepreneur Ernest Solvay established a soda plant back in 1982.

Jean De Lannoy, Deputy Head of Mission of the Embassy of Belgium in Ukraine was present at the opening. He emphasized significance of common Belgian-Ukrainian history and of the common heritage present in Donbas until nowadays. He also expressed willingness and hope for future cooperation between the two countries. In course of his visit to Severodonetsk Mr. De Lannoy met local civic activists in the premises of UCMC’s regional branch Crisis Media Center “Sіversky Donets”. Representatives of various civic initiatives spoke about their activities that range from assistance to IDPs, help to the army to re-arranging of public spaces. Deputy Head of Mission of the Embassy of Belgium also met the acting city mayor Hryhoriy Pryheba and Head of the Luhansk state regional civil-and-military administration Yuriy Garbuz.

The exhibition is open at the Severodonetsk city palace of culture (28 Khimikiv prospect) until May 29. It will tour four more cities of Donbas through summer.

Read more about the exhibition here.
Check out Belgian heritage in Lysychansk here.