Kyiv, May 22, 2016. Militants conducted an attack in Avdiivka yesterday using 122-mm artillery prohibited by the Minsk agreements. 70 projectiles were launched at ATO troops’ positions during the attack. Moreover, militant’s fire was so intense that it posed direct threat not only to lives of servicemen and civilians,  but representatives of the Joint Center for Control and Coordination,” informed the spokesman of the Presidential Administration on ATO related issues Colonel Oleksandr Motuzyanyk at a press briefing at Ukraine Crisis Media Center. He said the Ukraine made a commitment to guarantee safety of the monitoring mission, so all it members were retrieved, including the representatives from the Russian side. “Immediately after Avdiivka shelling, militants turned the cannons and started shelling towards Donetsk in order to blame it on ATO troops. It is not the first time when Russia-backed militants are shooting in both directions to blame Ukrainian troops,” added Col. Motuzyanyk. 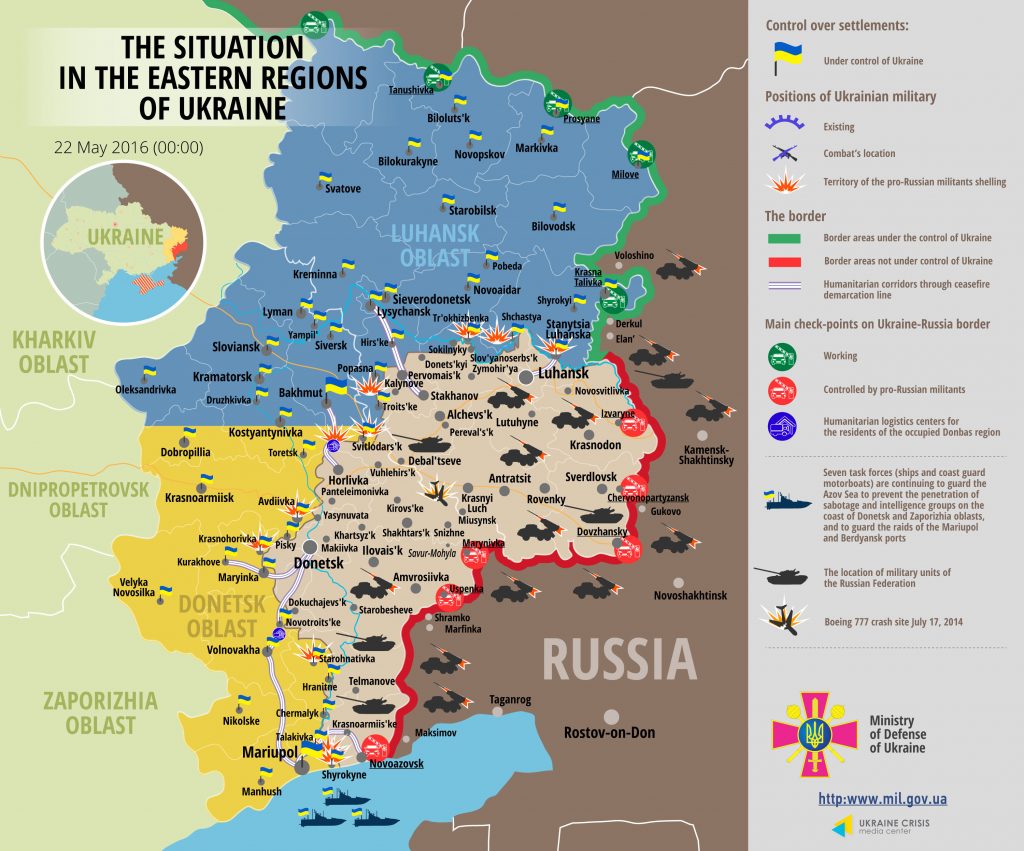 The situation in the Luhansk sector was the most restless in the vicinity of Stanytsia Luhanska, where militants were shooting ATO Ukrainian troops’ position for one hour using large machine guns and grenade launchers. “Local checkpoint and a railway bridge came under fire which might be the evidence of intentional enemy’s provocation aimed at limiting citizens’ access to the territories controlled by Ukrainian authorities,” said Col. Motuzyanyk.

“One Ukrainian serviceman died in combat in the past 24 hours and one was wounded. It happened during the shelling of Avdiivka,” informed Col. Motuzyanyk.

The spokesman also said that, according to the recent intelligence, militants from so-called “police of the Donetsk people’s republic” reclassified about 50 documents confirming death of people of gunshot and fragment wounds, turning them into suicides, criminal damage and domestic conflicts. “The biggest number of the victims was admitted from the vicinity of Yasynuvata and Avdiivka,” he added.

Officers of the Security Service of Ukraine (SBU) detained a Severodonetsk inhabitant who was planning to commit a subversive attack against the ATO troops at the direction of Russia-backed militant groups. “It has been identified that the man was providing the enemy with information regarding movement of manpower and equipment of the Armed Forces of Ukraine to identify the place of subversive act near Severodonetsk. He had to receive explosives soon,” informed Col. Motuzyanyk. He said that communication equipment with evidence of receipt of instructions on the act of sabotage was seized during the search of the detainee’s premises.

Col. Motuzyanyk also informed that SBU is conducting a program “I am coming back to peaceful life” aimed at prevention of smuggling explosives, weapons and ammunition by servicemen from the ATO zone. As a part of preventive measures, smuggling of 85 RGD-5 and F-1 grenades with fuses, signal mines, 25 30-mm missiles and a large number of cartridges was prevented.