Mostly shelled over the past 24 hours – Donetsk and Mariupol sectors. Ukrainian Armed Forces suffer no casualties.

Kyiv, May 26, 2016. The most difficult situation in the ATO zone was registered in the Donetsk sector yesterday – in Avdiivka, Zaitseve and Luhanske. Militants shelled ATO troops’ positions 12 times in 24 hours in this area, using heavy armor three times. “Russia-backed militant groups used mortar launchers, armored personnel carriers and snipers during the attacks,” said spokesman of the Presidential Administration on ATO related issues Colonel Oleksandr Motuzyanyk at a press briefing at Ukraine Crisis Media Center.  Ukrainian Armed Forces incurred no losses in combat yesterday, but two troops were wounded by sniping fire in Zaitseve and Novotroitske. 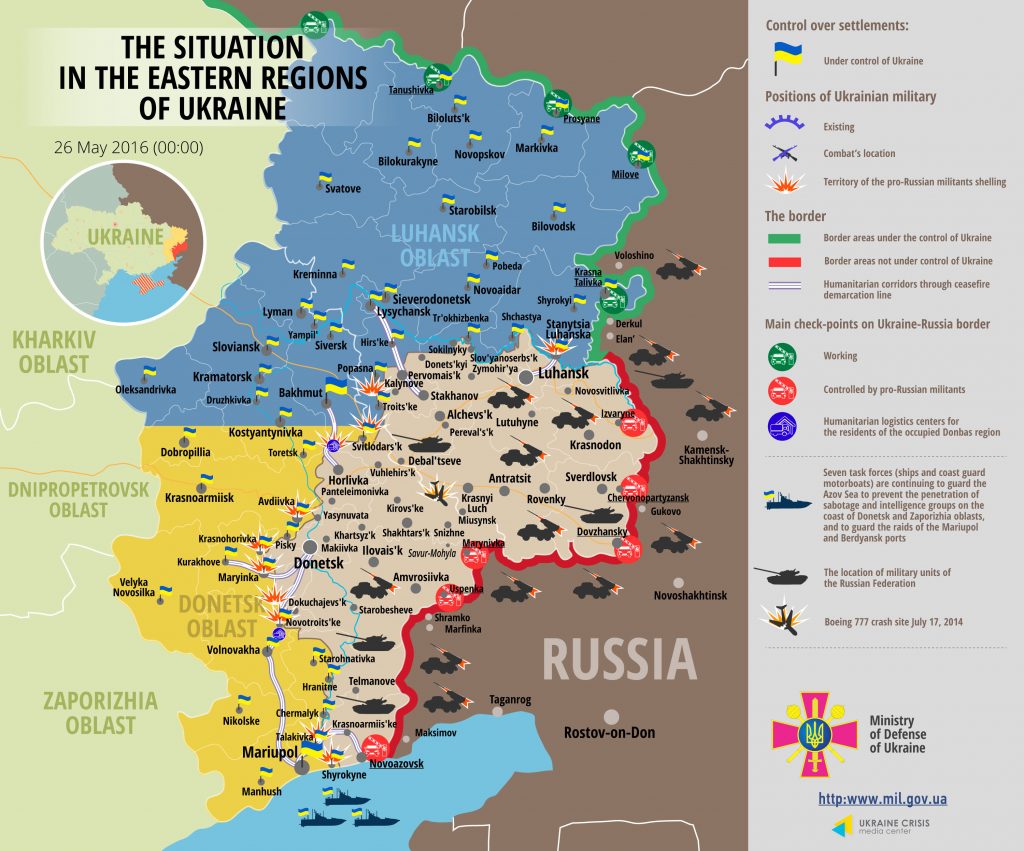 The situation was restless in the area between Krasnohorivka and Shyrokyne in the Mariupol sector. Russia-backed militants attacked ten times in 24 hours. “ATO forces succeeded in destroying a hostile anti-tank missile system shooting at our positions,” said Col. Motuzyanyk. Six attacks took place in the Luhansk sector. “Occupants were shooting at Ukrainian positions near Novozvanivka in Popasna district for approximately two hours. Militants were using armored personnel carriers and anti-aircraft mounts during the attacks. Moreover, a hostile provocation took place in Stanytsia Luhanska,” said the spokesman.

According to the Chief Intelligence Directorate of the Ministry of Defense of Ukraine, seven died and 16 wounded militants were admitted to hospitals in Donetsk for the past 48 hours. For instance, three militants from so-called “3rd separate motorized rifle brigade” located in Horlivka were wounded. “Two days ago, on May 24, one militant died and another one was wounded as a result of uncoordinated actions. They were occupants’ scouts trying to get to the rear of ATO troops, but were assaulted by militants from the so-called “11th separate motorized rifle battalion”, said Col.  Motuzyanyk. Another militant, a member of the so-called “Khan” battalion, voluntarily surrendered to law enforcements. Two militants joined the Ukraine’s Security Service (SBU) program “You are waited for at home”. Ono of them, a Mariupol resident, received a suspended sentence. Another one, an inhabitant of Troitske district in Luhansk region, did not receive any punishment, because he was working as a firefighter for militants of self-proclaimed “Luhansk People’s Republic” (“LPR”). It was the only possible way to feed his family at that time.

Law enforcement officers detained two Ukrainians and one citizen of Russia who were stealing weapons and explosives from military supply depots. They were arrested during an attempt to sell yet another batch of grenades and cartridges. “In total, law enforcements seized a large number of small arms, ball grenades of various types and over 5 thousand cartridges of various calibers,” said the spokesman. Moreover, a weapons cache was found in Mariupol. “Having responded to an emergency of rendering an anti-personnel mine safe, Mariupol police found an armory on the territory of a garage cooperative society. A spent anti-tank missile, magazine for automatic weapon and over 400 cartridges were seized from a cache,” informed Col. Motuzyanyk.