Situation in the ATO zone is still tense. The adversary launches reconnaissance UAVs along the contact line.

Kyiv, May 25, 2016. The hostilities were the most intense in Zaitseve, Avdiivka, Opytne strongholds and Putylivska coal mine. “Occupants drastically increased density of mortar fire. Over a hundred mortar shells were launched at our positions yesterday. Moreover, the enemy randomly used armored personnel carriers,” informed spokesman of Presidential Administration on ATO-related issues Colonel Andriy Lysenko at a press briefing at Ukraine Crisis Media Center. 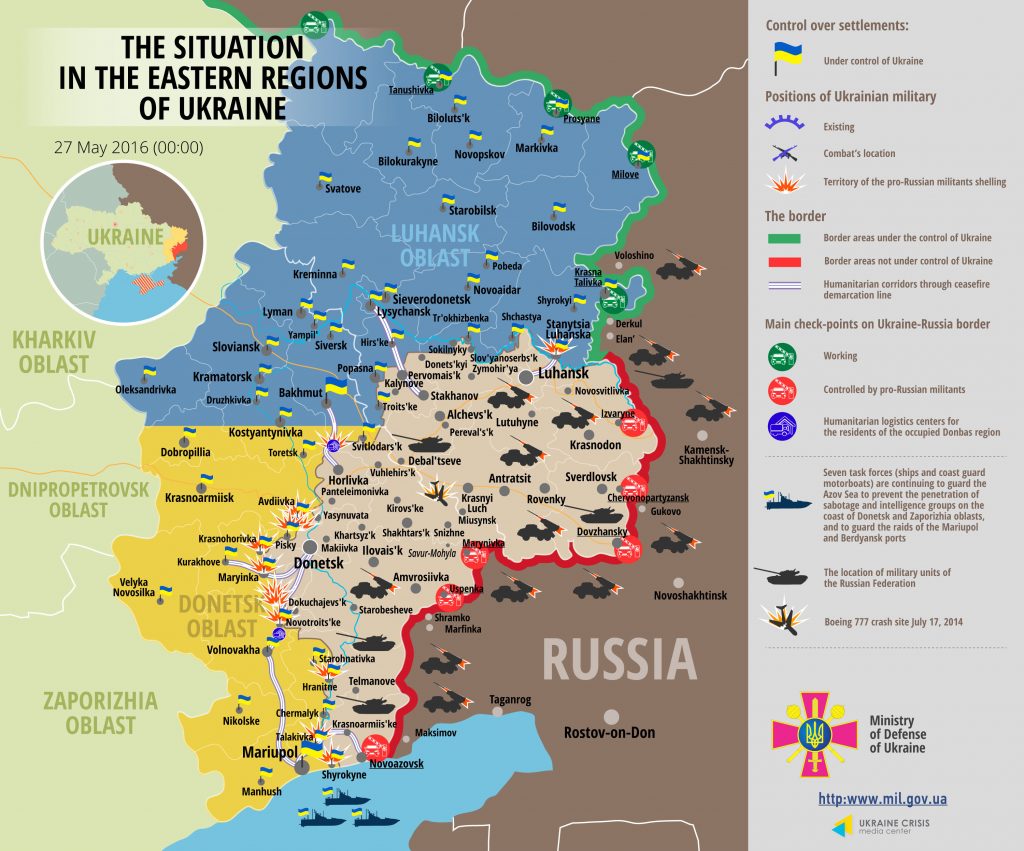 In total, 15 militants’ attacks took place in the Donetsk sector, 12 involved the use of mortar launchers.

14 attacks conducted by Russia-backed militant groups took place in the Mariupol sector in 24 hours, six of them from mortar launchers. Most attacks took place in Krasnohorivka, near Dokuchaevsk and Shyrokyne. Militants violated the ceasefire once in the Luhansk sector in Stanytsia Luhanska.

Ukrainian Armed Forces incurred no losses in combat, 14 troops were wounded. “It happened as a result of hostile attacks in the Donetsk sector and our BTR-80 armored personnel carrier tripping an anti-tank mine near Starohnativka,” informed Col. Lysenko.  Militants lost four soldiers dead and 11 wounded from three subdivision of self-proclaimed “Donetsk People’s Republic” (“DPR”). According to the Chief Intelligence Directorate of the Ministry of Defense of Ukraine, nine flights of unmanned aerial vehicles (UAV) along the entire frontline were registered in the ATO zone. The intelligence found that the UAV was launched from the Russian territory. “Since early May the adversary launched 91 UAVs, 59 of them in the last week,” said Col. Lysenko.

Moreover, this morning militants downed OSCE UAV on the southwest outskirts of Horlivka. “It should be noted that interfering with OSCE Special Monitoring Mission (SMM) activity is a blunt violation of clause 3 of the Minsk agreements,” emphasized Col.  Lysenko.

A criminal groups dealing with smuggling weapons from the ATO zone was divulged in Kharkiv region. “Ukraine’s Security Service jointly with the police detained the organizer during the attempt to sell about 1000 cartridges to Kalashnikov assault rifle and RGD-5 grenades. Three inhabitants of Izum district in Kharkiv region were members of the group,” informed Col. Lysenko. He added that firearms and ammunition were seized during search of their premises.