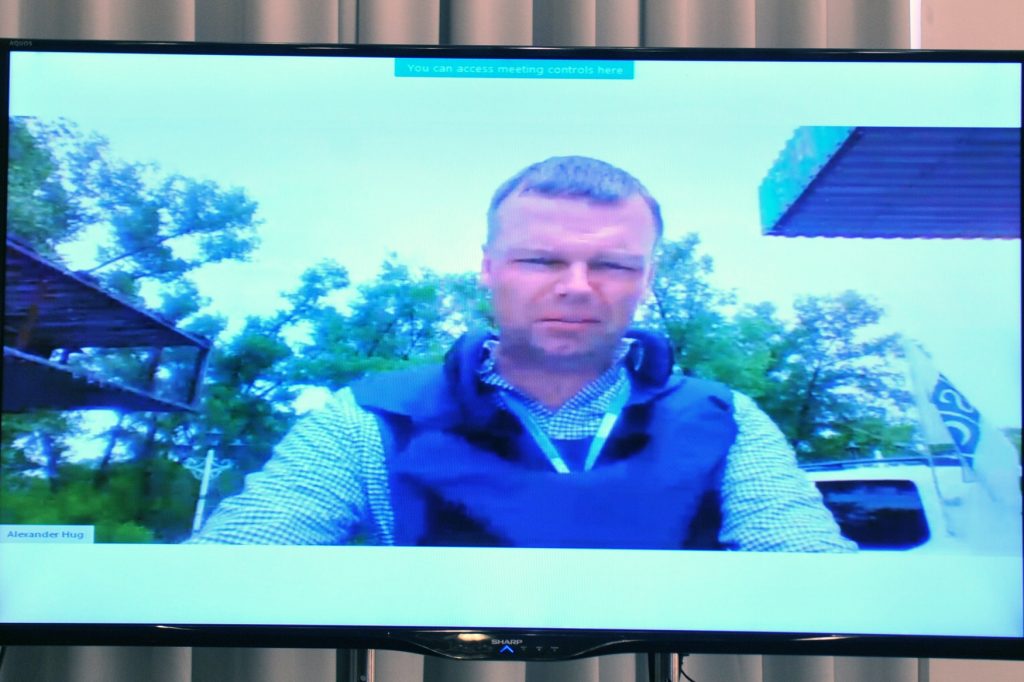 Kyiv, May 27, 2016. On May 26, the OSCE Special Monitoring Mission (SMM) registered a three-fold increase in the number of ceasefire violations compared to the previous day. “Government-controlled Avdiivka and areas around Donetsk airport were particularly violent. Initial reports suggest that three Ukrainian Armed Forces soldiers were injured, one seriously,” stated Alexander Hug, First Deputy Chief Monitor of the OSCE SMM at the press-briefing at Ukraine Crisis Media Center via Skype from Donetsk.

According to him, there is a connection between restrictions on the SMM and violence or other breaches of the Minsk agreements. “Last Friday, the so-called “Donetsk People’s Republic” (“DPR”) disabled two SMM cameras in the area where most of the violence happened yesterday. Although we could not see what was happening in the area at night, we can clearly see that certain people are intent on hiding things from the public view,” Mr Hug explained.

Alexander Hug stated that an SMM unmanned aerial vehicle (UAV) observed 20 infantry fighting vehicles and a number of fuel and military-type trucks at a rail yard in the city. “Immediately afterwards, the UAV’s Global Positioning System was jammed, forcing the ground crew to land the UAV,” First Deputy Chief Monitor emphasized. According to him, yesterday, on May 26, another UAV was actually shot at near government-controlled Bohoyavlenka, about 50 km south-west of Donetsk. “Initial analysis of retrieved footage from the UAV revealed the presence of trucks loaded with ammunition boxes hidden in a nearby forest and an object which appears to be a towed artillery piece. The weapon is just inside the 25 km withdrawal line,” Mr Hug said.

First Deputy Chief Monitor argues that there are still problems to be resolved within the Joint Coordination Center for Ceasefire Monitoring (JCCC). In particular it needs to be empowered. “It is one of the few instruments on the ground where direct dialogue takes place. It is designed to resolve existing problems. It is a place where practical steps can be made towards strengthening the ceasefire, reducing tension, enhancing trust and ultimately ending the violence. It is, however, essential that the various strands of the JCCC work jointly. And also that the JCCC jointly works with the SMM,” believes Mr Hug.