Ukrainian troops incurred losses. Russia-backed militants use heavy weapons in half of the attacks. Combat is on all along the contact line. Militants actively use unmanned aerial vehicles.

Kyiv, May 30, 2016. Three Ukrainian servicemen were killed in action in ATO zone over the last day, eight more servicemen were wounded in action. “Ukrainian troops incurred these losses in the Donetsk and Mariupol sectors,” said Colonel Andriy Lysenko, spokesman of Administration of the President of Ukraine on ATO-related issues at a press-briefing at Ukraine Crisis Media Center. Main Intelligence Department of Ukraine’s Defense Ministry envisaged militant losses on May 27-29: ten fighters were killed and 11 were wounded. 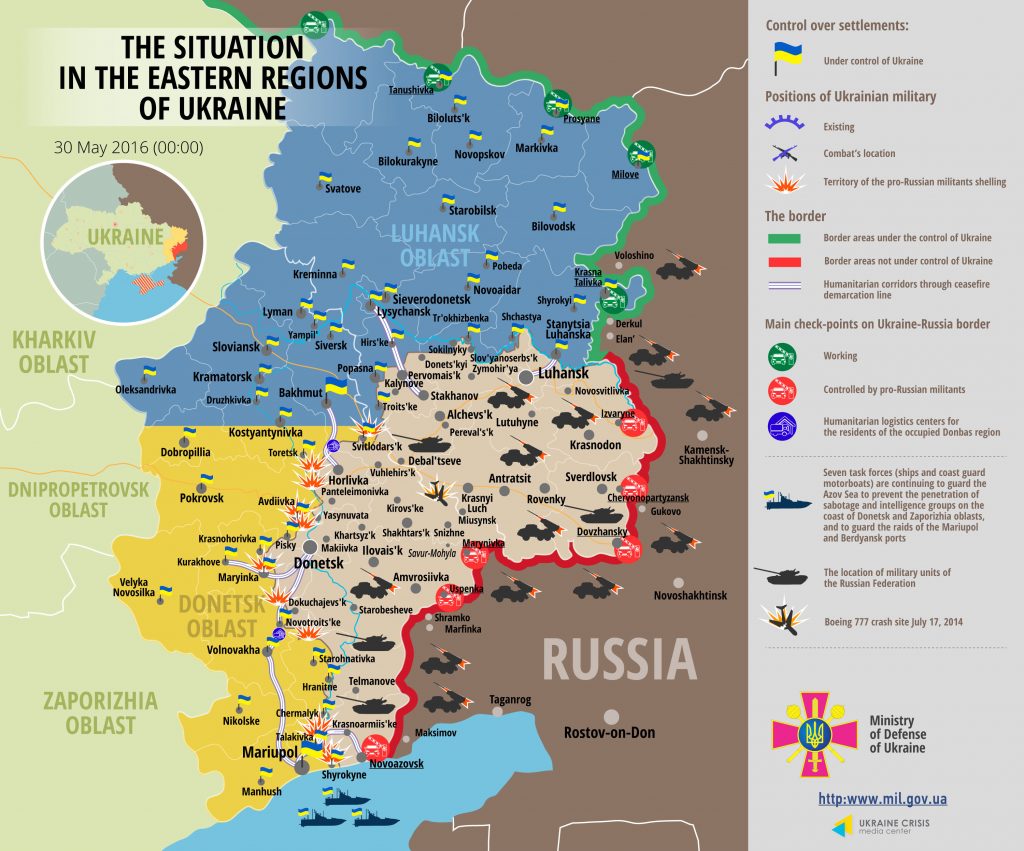 Militant groups made 14 attacks in the Donetsk sector, six of them included the use of heavy weapons. “Active combat actions continue in the area of Luhanske, Avdiivka and near the positions on Putylivska mine. Occupants keep actively using mortars: over 220 mortar mines were launched upon Ukrainian positions over the last day,” noted the ATO spokesman. Yesterday it was quiet in the area of Horlivka agglomeration and in the Donetsk airport. “All Ukrainian troops are successfully holding their positions, the contact line remains stable,” added Colonel Lysenko.

Militant groups made 11 attacks in the Mariupol sector yesterday, six of them involved the use of heavy weapons. “Occupants made one artillery attack and a series of mortar attacks all along the frontline. There are no parts on the contact line where the situation is calm: enemy violates ceasefire both during the day time and at night,” added the ATO spokesman. It was quiet in the Luhansk sector yesterday.

Ukrainian intelligence reported that militants deployed seven unmanned aerial vehicles in the Donetsk sector yesterday including in Tchasiv Yar, Zaitseve, Mayorsk, Tarasivka, Oleksandropil and Avdiivka. “One of them was launched from the territory of Russia – from the town of Matveyev Kurgan of the Rostove region,” noted the spokesman.

Colonel Lysenko also reminded that due to intense militant attacks repair brigades are still not able to restore water supply near Dokuchayevsk. According to the OSCE Special Monitoring Mission around eight thousand persons are deprived of water supply.