Plans are to increase Russian manpower and weaponry twofold in several years.

He informed that an all-Russia army competition of flying crews “Avaiadarts-2016” will take place in the annexed Crimea on May 25 – June 8. Up to 70 tactical aviation aircrafts will participate in the competition, 58 of them were redeployed to Belbek, Kirovske and Saky air facilities from the territory of Russia. “It is also planned to engage long-range aircrafts TU-22MZ from the 22nd heavy bomber aviation division and military transport aircrafts,” said the representative of the Main Intelligence Directorate. He emphasized that performances of the most aircrafts redeployed to the peninsula allow attaining combat tasks in air space of the countries of Black Sea region. “Practical mission tasks are planned for June 1, 3 and 4 at military training area on Cape Chauda 36 kilometres east of Feodosia. General supervision is entrusted to chief commander of Aerospace Forces of the Russian Federation, Colonel General Bondarev,” added Skibitskyi.

According to the intelligence, about 23.9 thousand troops, 613 tanks and combat armored vehicles, 162 artillery systems (56 out of these are multiple rocket launcher systems), about 100 combat planes, 56 helicopters, 16 coastal missile systems, 30 surface ships and 4 submarines are located on the temporarily occupied peninsula as of May. It is planned to increase Russian manpower and weaponry in Crimea by half or twofold by 2020-2025. 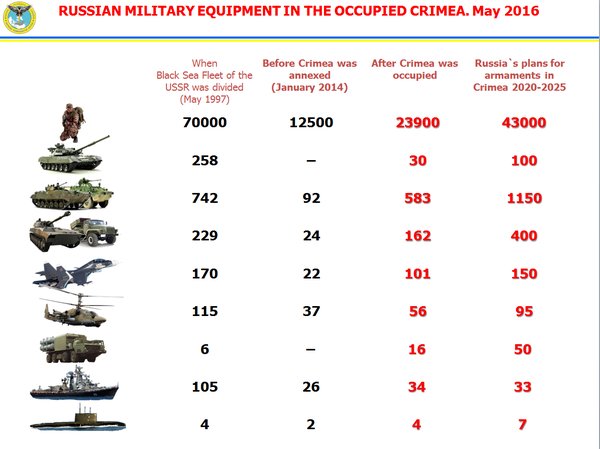