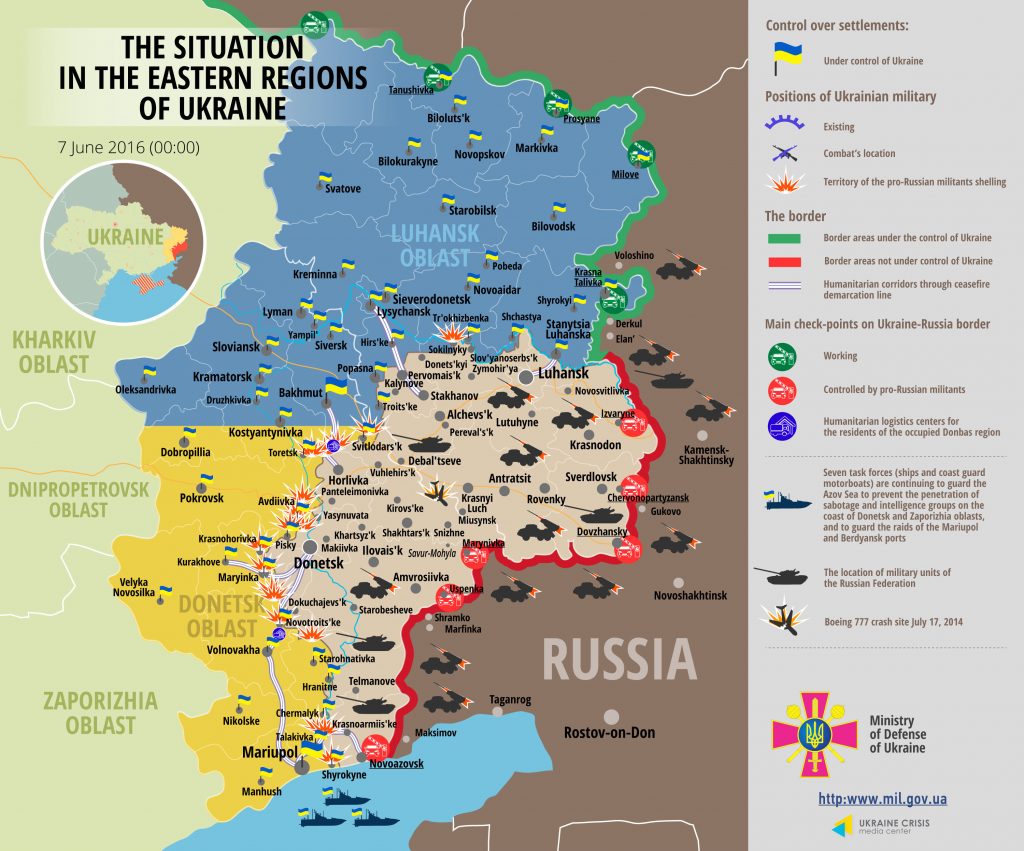 Militants violated the ceasefire in the Luhansk sector, shooting from anti-tank missile system near Sokilnyky village in Novoaidar district. A number of intense firefights between ATO troops and militants took place along the entire frontline in the Donetsk sector. Over 150 mortar shells were launched at Ukrainian positions. “There are no calm areas along the frontline. Apart from traditional flashpoints – Luhanske, Zaitseve, Avdiivka and Opytne, militants were shooting in other places – in Pivnichne village (former Kirove) of Toretsk town council and Novoselivka Druha,” said Col. Lysenko. In total, 14 militants’ attacks took place in the Donetsk sector yesterday, 11 one these involved use of mortar launchers. One Ukrainian serviceman died in combat yesterday and nine were wounded.

According to Col. Lysenko, officers of the Security Service of Ukraine (SBU) jointly with servicemen detained a member of militants’ subversive reconnaissance group who was assaulting one of ATO strongholds in Bakhmut district, Donetsk region. A Kalashnikov assault rifle with cartridges was seized from him. The SBU officers jointly with policemen found militants’ weapons cache in Rubizhne containing two RPG-25 grenade launchers and two RGD-5 and F-1 grenades.

Col. Lysenko provided information from Ukrainian intelligence regarding militants’ losses in the past days: four militants from so-called “9th regimen” (Novoazovsk) were wounded on June 4. They were members of subversive reconnaissance group near Kominternove. Later they were retrieved to Russia. Three militants from the same subdivision were wounded the following day, on June 5. They are treated in Zirochka children’s camp in Bezimenne village used by militants as a hospital. “One occupant from so-called “7th brigade” (Debaltseve) was killed and two wounded on June 6 due to their vehicle having tripping their own mine field. Moreover, one scout from so-called “11th regiment” (Makiivka) died yesterday, and two militants were wounded by friendly mortar fire,” added Col. Lysenko.

The spokesman also informed that new requirements to noncommissioned officers that comply with best practices of the NATO countries are being introduced in Ukrainian army. “The President of Ukraine signed Strategic Defense bulletin defining priorities for development of the Armed Forces of Ukraine and their restructuring by 2020, aimed at compliance with the Alliance standards. It is a complex document establishing definite deadlines for implementation of the set tasks,” said Col. Lysenko. Moreover, a note on the Ministry of Defense of Ukraine joining multinational military unit consisting of the V4 troops was signed in Brussels.