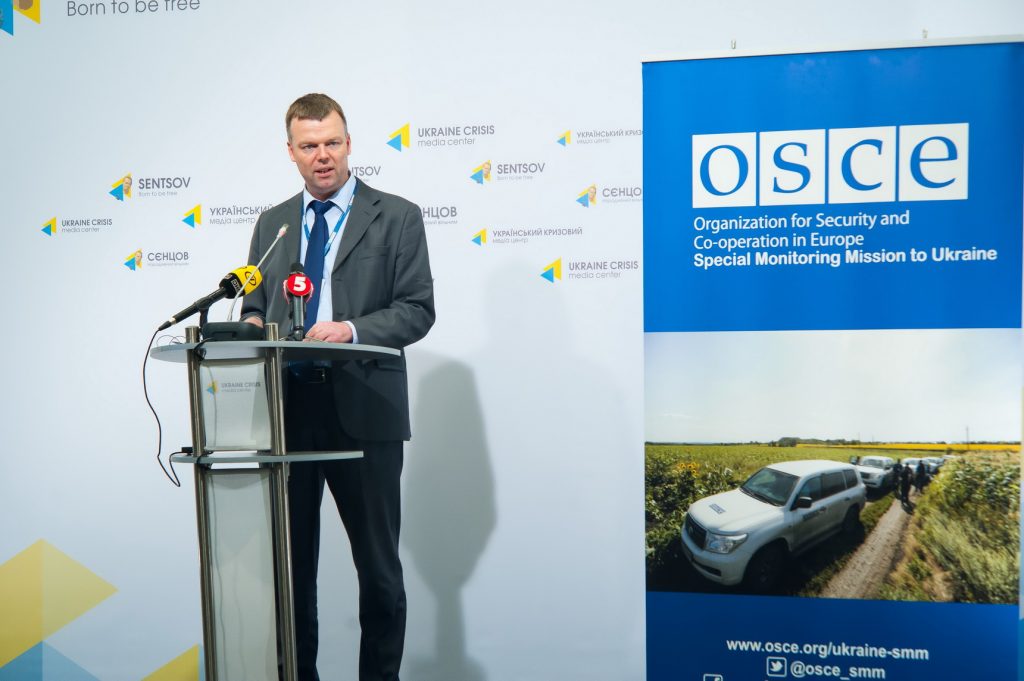 OSCE monitors observe crater close to inhabitants’ areas and record restriction of freedom of movement in the occupied areas.

Kyiv, June 8, 2016. Last week the OSCE Special Monitoring Mission (SMM) recorded a 10 percent increase in ceasefire violations compared to the previous week. The previous week in itself had seen a 50 percent increase on the week before that. Three quarters of all ceasefire violations last week were recorded in the Avdiivka-Yasynuvata-Donetsk airport area. The sides also fail to withdraw weapons from the security zone. That was stated by the Alexander Hug, First Deputy Chief Monitor of the OSCE Special Monitoring Mission in Ukraine. “On June 5, in government-controlled Pervomaiske, for instance, monitors saw craters caused by 120-mm mortars, one just four metres from a kindergarten building and another in the adjoining playground.  In “Donetsk People’s Republic” (“DPR”) -controlled Dokuchaievsk, our monitors saw a tree in a children’s playground – 35 metres from a residential building – cut in two by a powerful impact”, elaborated Mr Hug.

According to him, people in western Luhansk region told the monitors that they were prevented by the so-called “Luhansk People’s Republic” (“LPR”) from reaching Novooleksandrivka, the nearest settlement to them. “This restriction on their basic right to move freely within their own country – and even within their own locality – means they have trouble accessing food and medicine,” argued the First Deputy Chief Monitor. He believes that this experience is typical of many others. Mr Hug said that the same goes to the hundreds of people at checkpoints. “Our monitors were also in government-controlled Mariinka, just south-west of Donetsk. With more than 100 vehicles lined up at the Ukrainian Armed Forces checkpoint there, our monitors heard a burst and seven single shots of small-arms fire coming from military positions 10-20 metres from the checkpoint,” he stated.

First Deputy Chief Monitor said that the gas pipeline repairs in Mariinka have been completed, with just gas pressure testing to be finalised. Potentially over 30,000 people on both sides of the contact line will benefit. “Worryingly, however, we have recently noted heavy fighting in the area. On June 6, for instance, our monitors recorded 117 explosions there”, he followed. Mr Hug added that near Mayorsk, north of Horlivka, the SMM monitors observed the so-called “DPR” built another checkpoint, placing themselves just over a kilometre from Ukrainian Armed Forces positions.