Kyiv, June 16, 2016. The President is ready to sign a demobilization order regarding servicemen drafted during the 5th wave of mobilization, said the spokesman of the Presidential Administration on ATO related issues Colonel Oleksandr Motuzyanyk at a press briefing at Ukraine Crisis Media Center. “The Minister of Defense of Ukraine, General of the army of Ukraine commissioned the responsible officers with drafting a proposal on ensuring demobilization of the recruits from the 5th wave. The Ministry of Defense of Ukraine will submit the corresponding draft order for the President’s approval,” informed Col. Motuzyanyk. “Respective military personnel from subdivisions of the Armed Forces of Ukraine were trained to replace the troops,” he added. 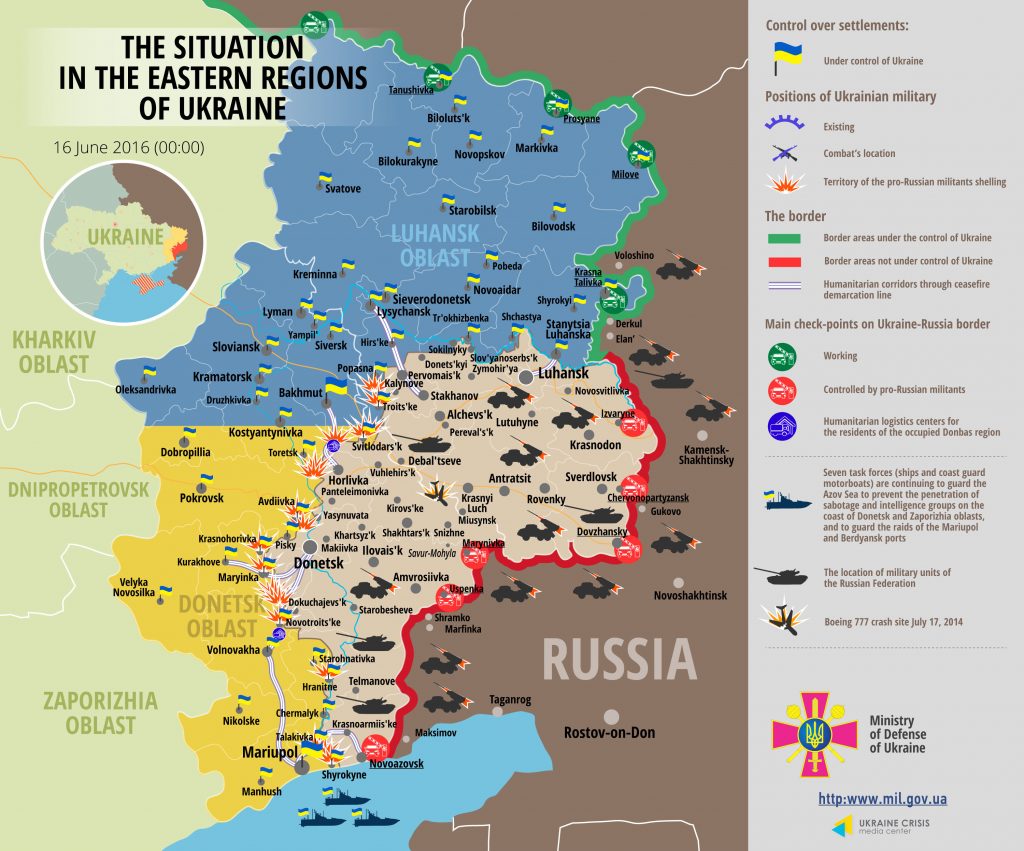 Intensity of militants’ attacks in the ATO zone decreased in comparison with the previous day. “25 attacks took place in the Mariupol sector yesterday, four involved use of heavy armor, namely mortar launchers. Small arms, machine guns and grenade launchers of various systems were used during the other attacks and armed provocations,” informed Col. Motuzyanyk. Mortar attacks took place in Berezove and the neighbouring Novotroitske, where militants launched bout 20 mortar shells at Ukrainian positions. Militants’ snipers were active in Krasnohorivka, Mariinka, Hranitne and Berezove. “As we informed at a briefing yesterday, the enemy used a tank to shoot at Krasnohorivka residential quarters from the side of Staromykhailivka at dawn yesterday. Five houses were damaged and a woman wounded,” reminded Col. Motuzyanyk.

15 attacks conducted by Russia-backed militants were registered in the Donetsk sector in the past 24 hours. Militants launched 60 120-mm mortar shells at Ukrainian positions near Luhanske at the Svitlodarsk bulge. Moreover, they shot from armored personnel carrier several times. No heavy armor was used on the outskirts of the occupied Horlivka, but a hostile sniper was shooting in Troitske. “Heavy armor was hardly used in the Avdiivka industrial area, which was a traditional “flashpoint” in the past weeks. Militants only launched four mortar shells at ATO troops in that area late at night. Nevertheless, the enemy continues widely using large machine guns and grenade launchers,” said the spokesman. One brief militants’ provocation involving use of tripod-mounted man-portable antitank gun was instigated in the Luhansk sector near Novozvanivka south of Popasna.

Ukrainian Armed Forces incurred no losses in combat in the past 24 hours, two troops were wounded. According to the available information, militants lost 11 people killed and 13 wounded from five different subdivisions of self-proclaimed “Donetsk people’s republic”.

According to Ukrainian intelligence, Russian continues moving military equipment and ammunition to the temporarily occupied territory. “For instance, three trucks with ammunition and three tanks with fuel were deployed through Krasnodon border town in Luhansk region; 14 tanks carrying combustible and lubrication materials were delivered to Rovenky, about 450 tons of fuel arrived at Kuteinikovo settlement in Donetsk region, and three fuel tanks came to Ilovaisk,” informed the spokesman. Five trucks carrying missiles for 122-mm Grad multiple launcher rocket systems proceeded through Diakove village in Antratsyt district. “Moreover, the intelligence informs that an airborne special detachment of the 45th separate special operations brigade of the Armed Forces of the Russian Federation based in Moscow region arrived at Novoazovsk.

It is planned this subdivision together with other Russia-backed militants’ groups will conduct intelligence-gathering operation aimed at discovering ATO troops’ artillery  scheme in the vicinity of Vodiane and Shyrokyne,” said Col. Motuzyanyk.

Moreover, the Chief Intelligence Directorate of the Ministry of Defense of Ukraine informs that militants provoked Ukrainian troops to respond with fire so that SMM OSCE observers could witness this attack. “Being informed of OSCE monitors’ movements, a subdivision of the 9th separate marine assault motorized rifle regiment” (Novoazovsk) shelled our positions from small arms and built a smoke screen, Two OSCE vehicles passed the area in 10 minutes’ time. The same incident was registered two days before in the vicinity of Vodiane,” elaborated Col. Motuzyanyk.