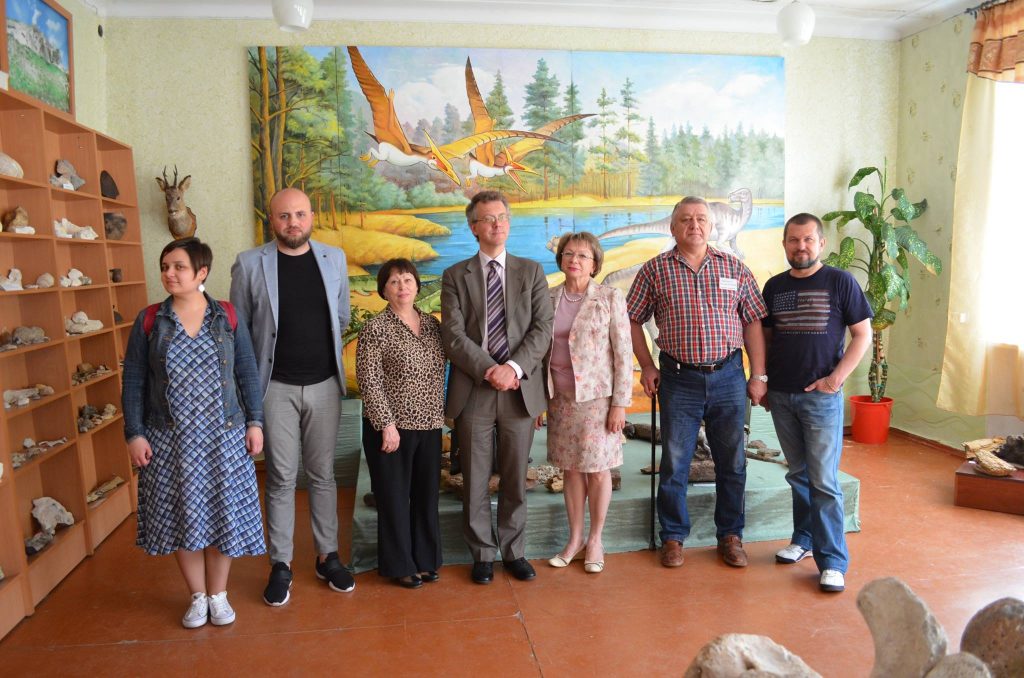 Kramatorsk, June 1, 2016. The eastern Ukrainian city of Kramatorsk was the next city in the chain of the tour for the Exhibition on Belgian investment in Ukraine in late XIX – early XX century. Kramatorsk City History Museum will host the exhibition for two weeks before moving to the next city in Donetsk region. The exhibition narrates a story of Belgian investments into development of industrial infrastructure on the territory of former Yekaterinoslavska Gubernia (region) and in particular the city of Kramatorsk.

The exhibition is based on the collection of Ukrainian patron of arts Dmytro Pirkl and was created in partnership with coordinators of the Art & Culture Department of Ukraine Crisis Media Center – Olha Honchar and Leonid Marushchak.

Opening of the exhibition gathered many professionals such history teachers, local history researchers, representatives various historic communities as well as local authorities and many media.

To explore the civil landscape of the city the group went to meeting the local civil community. The meeting took place in the Vilna Khata hub and lasted about an hour and a half and gathered approximately ten non-governmental organsiations. During this time, the local NGOs voiced the issues they face in their everyday activities and described the civil landscape in their city. Jean De Lannoy, Deputy Head of Mission (DHM) of the Embassy of Belgium in Ukraine gladly supported this discussion and was especially interested in questions of placement of internally displaced persons and cooperation between the NGOs and local authorities.

The exhibition was in fact a push to resume the long abandoned dialogue between the local authorities and Belgium, therefore DHM Jean De Lannoy, together with UCMC coordinators and the exhibition patron, held a meeting with Svitlana Nikonenko, Deputy Mayor of Kramatorsk, and Denys Oshurko, Secretary of the City Council. Mr. De Lannoy emphasized that readiness of the Belgian companies present in Ukraine to invest in Kramatorsk, especially in the construction industry as he was rather surprised to hear that not a single residential house was built in the city since 1991 while there is a very high demand for housing now with the inflow of the internally displaced persons. Discussing the culture development of the city the local authorities informed that they put all efforts now into sports, as they believe it to be successful alternative to the local residents mentally exhausted by the military actions in close proximity to their town. UCMC coordinators Olha Honchar and Leonid Marushchak also suggested developing culture side of the city, encourage museum visits and offer various culture events for the local youths, so as to strengthen their knowledge on home town.

Meeting the Governor of Donetsk region Pavlo Zhebrivskyi and his deputy on humanitarian issues Igor Strokoz, Mr. De Lannoy mentioned many Belgian enterprises functioning in Donetsk region and stressed that more of them are willing to come provided there are guarantees for the foreign investment and properly ensures rule of law. The Governor talked more about reforms that take place in the region. Just like at the meeting with the local authorities, UCMC team brought up the questions of culture development of the region.