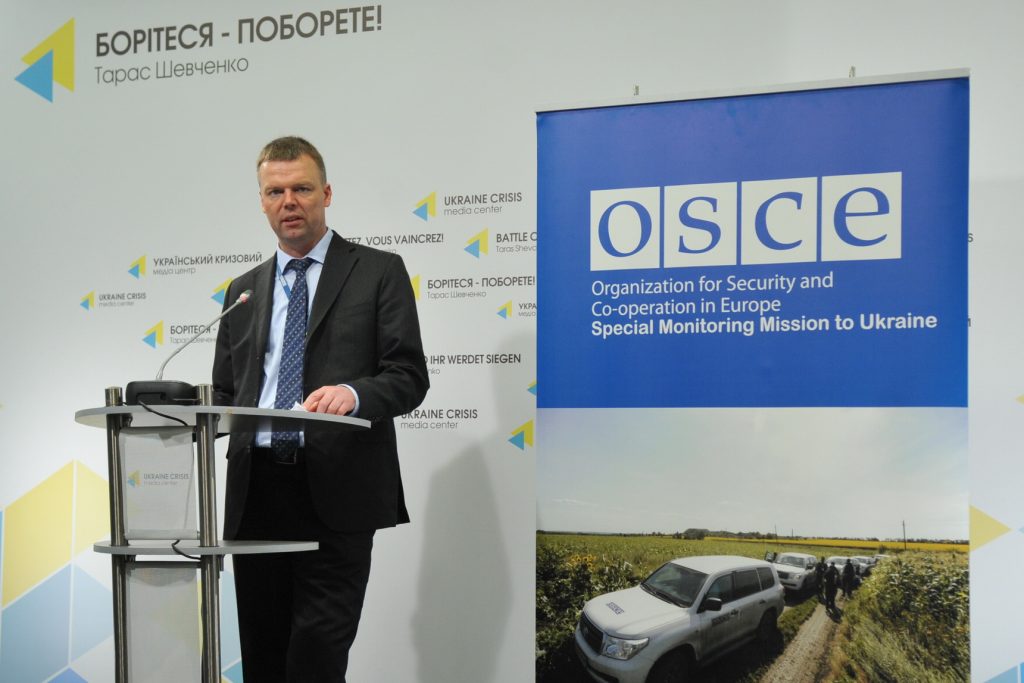 Hotspot for ceasefire violations is Donetsk region. SMM reports sides move closer to the contact line and urges them to adhere to the Minsk agreements.

Kyiv, June 17, 2016.  This week, the majority of the violence has been taking place in the area of Yasynuvata-Avdiivka, and the area around the Donetsk airport. The Debaltseve-Svitlodarsk road also continues to be a flashpoint for violence.

“Another bad week in Donbas. We have seen troubling developments with high numbers of ceasefire violations recorded in areas where relative calm had previously prevailed,” stated Alexander Hug, First Deputy Chief Monitor of the OSCE SMM in Ukraine at the press-briefing at Ukraine Crisis Media Center.

On June 15 for instance, 27 km south-west of Donetsk in the government-controlled Berezove, monitors reported 60 explosions south-west of their position. On the same day, monitors in Novooleksandrivka, western Luhansk Region, reported 50 mortar explosions – approximately three km to their south-west.

Mr. Hug emphasized that the OSCE SMM is particularly concerned by “the situation in the western and south-western outskirts of self-proclaimed “Donetsk People’s Republic” (“DPR”) – controlled Horlivka.”

On June 12, monitors in the city heard some 280 explosions to the west and south-west, as well as 50 rounds that were fired over a period of ten-minutes. Hug noted that many of these areas have had violence before, what is significant now is the intensity and frequency.

Ukrainian Armed Forces recently re-positioned themselves closer to enemy positions in Mayorsk, and at Stanytsia bridge. This follows the forward movement by the self-proclaimed “DPR” at Mayorsk on June 5, and the self-proclaimed “Luhansk People’s Republic” (“LPR”) who “moved their positions forward – actually across the river, which is the contact line – on 12 June,” said Mr. Hug. Ukrainian Armed Forces responded by moving their positions forward on June 15, “The situation at the bridge is particularly tense. There, the sides are now just 300 meters from each other.”

“Examples on both sides of the contact line – illustrate a wider point: the sides are not adhering to the commitments made in Minsk. They must do so, if normalisation and stabilisation is to be achieved,” concluded Alexander Hug.