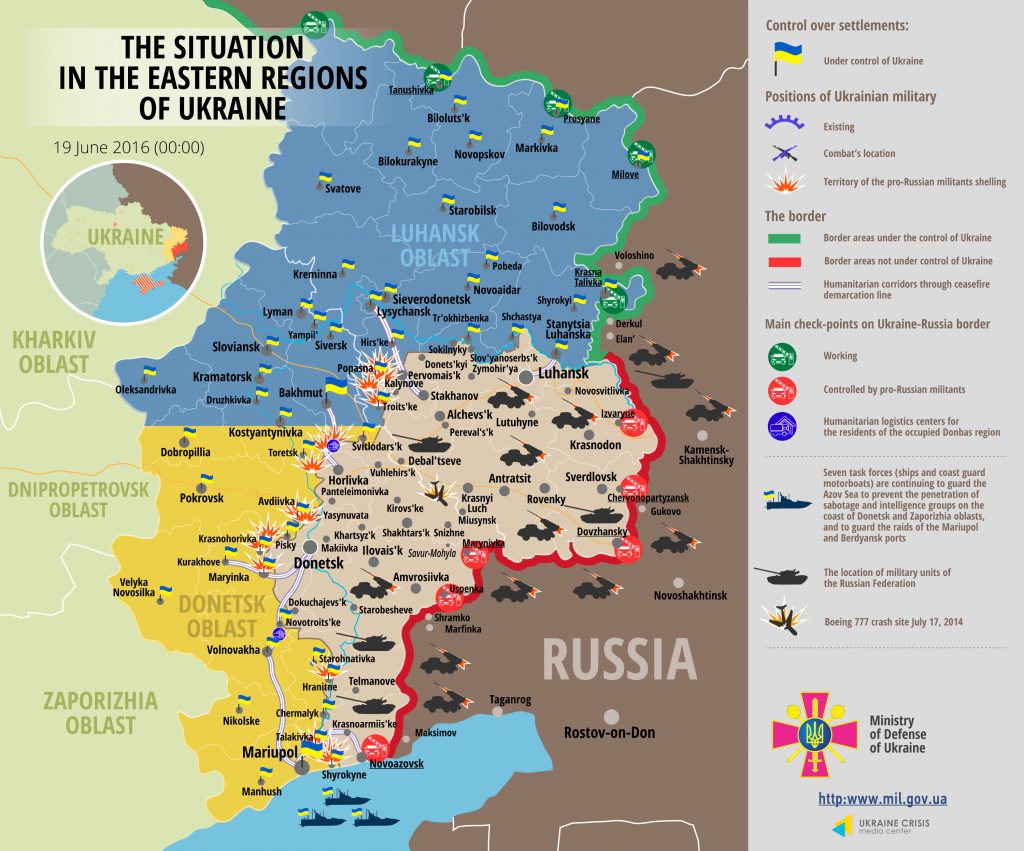 Three Ukrainian servicemen died in the past 24 hours. One soldier suffered fatal injuries in shelling of Ukrainian positions near Talakivka.

“Two troops died, having tripped a mine near Luhanske settlement in Bakhmut district of Donetsk region.  Another serviceman was wounded in the same incident near Luhanske,” said the spokesman.

Yesterday militants using small arms shot again towards residential buildings in Lobacheve village in Stanytsia Luhanska district. In the Donetsk sector militants continue using mortar launchers to shoot at Ukrainian troops. “Militants densely shelled ATO troop positions near the vicinity of Nevelske settlement in Yasynuvata district right after midnight. The adversary used cannons at the same area late last night followed by intense mortar fire. It has been identified that artillery batteries located in the occupied Donetsk were used in the shelling,” said the spokesman.

Moreover, Ukrainian positions near Putylivska coal mine and Troitske came under mortar fire. Militants used no heavy armor in other frontline areas in the Donetsk sector.

Active hostilities continue in the Avdiivka industrial area and on the outskirts of Horlivka.  The armistice held in the Donetsk airport.  “In total, militants violated the ceasefire in the Donetsk sector 18 times,” added Col. Motuzyanyk.

The situation remains difficult in Krasnohorivka of the Mariupol sector.  Militants used tanks to shoot at Ukrainian troops. Moreover, they launched over 70 mortar shells.  “Russian mercenaries used the weapons prohibited by the Minsk agreements during hours of darkness,” elaborated Col. Motuzyanyk. A firefight lasted over two hours in Mariinka early in the day involving use of small arms and grenade launchers of various types.  Militants used armored personnel carriers, mortar launchers and small arms against ATO troops. “Moreover, mortar attacks conducted by militants took place in Lebedynske and Shyrokyne. A hostile sniper was shooting in Hranitne.  In total,  20 attacks at ATO troops’ positions took place in the Mariupol sector,” informed the spokesman.

According to Ukrainian intelligence, three militants died and five were wounded in the last 24 hours from two militant groups of the self-proclaimed “Donetsk People’s Republic” (“DPR”) and two subdivisions of the self-proclaimed “Luhansk People’s Republic”. The so-called “100th separate motorized rifle brigade” of DPR incurred the biggest losses as a result of an abortive attack at ATO troop positions near Krasnohorivka.  “According to the Chief Intelligence Directorate of the Ministry of Defense of Ukraine, those were the militants of the same subdivision who attacked the subversive element of their own subdivision,  seizing all the weapons, armored vests, ammunition, food and fuel,” added Col.  Motuzyanyk.